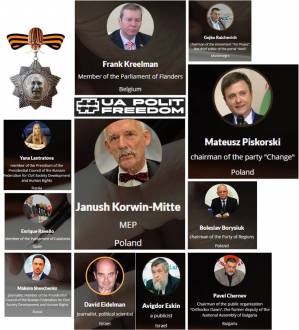 A new project launched in Moscow in support of so-called political prisoners in Ukraine has been endorsed by a number of far-right and / or pro-Russian politicians from a number of EU countries and Israel. Most are also known for their involvement in ‘observing’  the so-called Crimean referendum and illegal elections organized by the Kremlin-backed militants in Donbas.  The two Israelis have a long track record of attempting to paint Ukraine as a hotbed of anti-Semitism, and have been criticized as such by authoritative researcher on xenophobia and anti-Semitism in Ukraine. Viacheslav Likhachev. All have now turned their attention to a Russian-organized project which claims there to be mass-scale repression and 68 ‘political prisoners’ in Ukraine.

The project UApolitfreedom was officially initiated by Yana Lantratova, a member of Russian President Vladimir Putin’s Human Rights Council, and is also endorsed by one other member of the Council, Maxim Shevchenko.  The latter has been vocal over the last year in pushing the Kremlin position on events in Ukraine.

The petition claims that “mass political repression has become the reality in Ukraine.  Large numbers of people who hold different political views, often assessment on the basis of the language they use, their ethnic origin and on their residence in a particular area, have been subjected to arrests, torture and other infringements.”

Most of the alleged ‘political prisoners’ are in detention or have been convicted of charges linked with the violent attempts to seize control in Kharkiv, terrorist attacks and / or separatism in Odesa. The organizers themselves effectively acknowledge the number to be excessive, since 43 of the 68 are still being “checked’.  This did not stop them from publicizing their project as being in defence of 68 political prisoners.

It should be said that the Ukrainian authorities have laid themselves open to such attacks with respect to two cases.  Ruslan Kotsaba, a blogger and journalist, has been held in detention since Feb 7, and is facing charges of state treason and obstructing the lawful activities of the Armed Forces.  Kotsaba’s behaviour is viewed by many as reprehensible, but he was expressing his views, and the charges do not bear scrutiny (more details here).

There are also legitimate concerns over the ongoing detention of 10 people suspected of involvement in the tragic disturbances on May 2, 2014 in Odesa.  The charges against almost all of them are of involvement in mass riots, a charge which could, with as much justification, have been laid against hundreds of other people (more information here).

We would challenge the authors of the appeal to provide evidence that the others held in detention are political prisoners.

There have been claims, for example, in media reports that two journalists from Odesa are imprisoned for their views.  Odesa journalists are never silent when they believe colleagues are under pressure.  In May this year there was immediate response to a search carried out of the pro-Russian website Timer and its Chief Editor Yury Tkachov.  There was none to the arrests of Akhtem Buzila and Yelena Glishchinskaya, both of whom were not acting as journalists, but at the forefront of a dangerous Moscow-linked separatist venture (see: Odesa minorities cry foul as new ‘people’s council’ report their persecution ).  The venture and the Security Service’s response came, it should be stressed, after overt attempts since April 2014 to stir up trouble in Odesa, similar to that in Donbas, and constant bombs.

It is likely that if other western politicians were asked to endorse the appeal, they were aware of the above and steered well-clear of this ‘project’.  It is more than possible, however, that they were not even approached.

As mentioned, all the foreign signatories are well-known for their pro-Kremlin stance and most are also from far-right parties.  Many have demonstrated that they can be relied on to publicly praise Kremlin-supported electoral stunts not recognized by democratic countries.

Mateusz Piskorski, the head of a new aggressively pro-Russian party in Poland, Zmiana, led both the observers for the Crimean pseudo-referendum in March 2014, and for the militants’ ‘elections’ in November.  Zmiana was formed at the beginning of 2015 with members of both far-right organizations, and at least one extreme left-wing communist party.  One of the other three Polish signatories - Bolesław Borysiuk, reported by the civic watchdog Russian V Column in Poland as from the old communist nomenklatura has recently entered into an association agreement with Zmiana..

These strange bed partners reflect a trend seen also in the lists of ‘observers’ at elections supported by Moscow, as well as in the signatories to the latest initiative.  While far-right parties predominate, there are also people from the far left.  The dominating factor is always unquestioning support for the current regime in Russia and its position on Ukraine.

Other ‘observers’ who have now signed this appeal include: Frank Creyelman, member of the Belgian extreme right Vlaams Belang;  far-right Spanish (Catalonian) politician Enrique Ravello and Bulgarian Pavel Chernev.  The latter was previously in the extremely right Ataka party, and is reported to have been one of the Orthodox Dawn members who helped recruit a small number of Bulgarians to go to Crimea to support Russia’s invasion and occupation.

Another Bulgarian, Sviatoslav Proinov is the youth letter of the Ataka Party. Together with at least one other signatory, Goiko Raichevych from Montenegro, he was associated with attempts in Odesa to fabricate ‘Bessarabian separatism’.

Manuel Ochsenreiter is the editor of Zuerst, a neo-Nazi newspaper and a frequent guest on the Kremlin-funded English-language channel Russia Today.  Interpreter notes that on one such occasion he defended Russia’s annexation of Crimea, claiming that only Crimean Tatars in the pay of the EU oppose Russian rule, and that the Russian soldiers and their guns were needed to protect democracy from pro-Nazi Ukrainian nationalists.

There are also two members of the European Parliament.  Miloslav Ransdorf, Czech communist MEP, made his support for Russia and its occupation of Crimea abundantly clear during a visit to the peninsula in June 2015.  Janusz Korwin-Mikke, the highly controversial Polish MEP has been equally open in his support for Russia.

Given their defence of alleged victims of persecution in Ukraine, it is interesting that both Korwin Mikke and Piskorski visited Syria in December 2014, expressing support for the regime of Bashir Al-Assad.  No mention was made of any rights violations by that regime, quite the contrary.

The two Israeli signatories – Avigdor Eskin and David Eidelman – were noted by Likhachev back in 2010 for their “hysterical accounts of an unprecedented wave of anti-Semitism” in Ukraine on Israeli TV.  Eskin was just as vocal, especially on Russian television in March 2014,  claiming that anti-Semites were in power in Ukraine and speaking of a worrying rise in anti-Semitism.

This was identical to the line taken by the Kremlin, but roundly contradicted by Ukraine’s Jewish leaders, as well as by Likhachev who has monitored anti-Semitism in Ukraine for well over 10 years.  Moscow’s line about ‘fascist anti-Semitic hordes’ in Kyiv,  alleged separatism in Odesa, Transcarpathia and, recently, Lviv have all been contradicted.

Moscow has now turned to defending Ukrainian ‘political prisoners’. Not the considerable number of Ukrainians now held in Russian detention or, like Oleg Sentsov, Oleksandr Kolchenko and Nadiya Savchenko already being tried on absurd charges, but supposed political prisoners in Ukraine.  It is a bold move given the 50 Russian and Crimean political prisoners on the authoritative Memorial Society’s list in June 2015. It is also unconvincing – as are the credentials of the only politicians and commentators Russia regularly dredges up in its attempts to demonstrate ‘international support’.