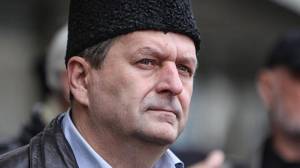 A court in Russian-occupied Crimea has extended until Nov 19 the detention of Akhtem Chiygoz, Deputy Head of the Crimean Tatar Mejlis [representative assembly] who has been in custody since Jan 29. The charges against him are not only legally absurd, but in breach of Russia’s own legislation since they pertain to a demonstration that took place before Russia’s invasion and annexation.  There are no grounds for holding him in custody, and his detention seems an overt attempt to isolate him, if not to punish him precisely for his determination not to leave his homeland.

It seems increasingly clear that the occupation regime has no intention of releasing Chiygoz.  , First Deputy Head of the Mejlis, the political motivation behind his detention was yet again demonstrated during the court hearing on July 28.  The prosecutor’s representative argued that he should remain in detention since at liberty he would be in contact with Mejlis leader Refat Chubarov and veteran Crimean Tatar leader Mustafa Dzhemiliev.  “What is that but overt politics, the wish to prevent such contacts and isolate one of the influential Crimean Tatar politicians?”, Dzhelyal asked.

Chiygoz  the following words to the court:

“I have a family, children and parents here. My father is 78, my mother 74. We did not return to our homeland in order to then wander around foreign lands and I therefore have no wish to abandon my homeland. Maybe it is this that influenced your decision to isolate me. I haven’t just been arrested, I’ve been isolated. For half a year I have been deprived of any possibility of seeing my son and my parents… As far as putting pressure on anybody concerned, it is the investigators who are putting pressure on us. I have no relation to the criminal proceedings brought against me. And today I am aware that there are grounds for hoping that the court will be objective when we are dealing with a politically commissioned case. Whether I am destined to live or to die, it will be in my homeland. I want the prosecutor, the Investigative Committee and the judge to know that I have no intention of leaving”.

Akhtem Chiygoz was first arrested on Jan 29, 2015.  He, and now at least 6 other Crimean Tatars are charged in connection with a demonstration which took place on Feb 26, 2014, i.e. the day before Russian soldiers seized control, and over which Russian-occupied Crimea can have no jurisdiction.  While some have been released, pending trial, two other men also remain in custody – Ali Asanov, whose wife recently gave birth to their fourth child and Mustafa Degermendzhy.  There are also ongoing searches and interrogations of other Crimean Tatars.

Radio Svoboda  at the time of Chiygoz’s arrest that their video footage clearly showed all representatives of the Mejlis seeking only to calm the crowd and prevent bloodshed.  This was also  by a Russian journalist Pavel Kanygin, writing for Novaya Gazeta, and present during the demonstration on Feb 26, 2014  He reported that Refat Chubarov used a megaphone to call for calm after the first scuffles broke out, and that later calls from both Chubarov and Aksyonov for protesters to disperse were heeded by the Crimean Tatars present, not be the pro-Russian demonstrators.

Repressive measures against Crimean Tatars and the Mejlis began soon after Russian soldiers seized control in Crimea.  Mustafa Dzhemiliev, then Refat Chubarov were banned from their homeland, and both administrative and criminal proceedings were brought against Crimean Tatars who had come to the border with mainland Ukraine on May 3, 2014 to meet Dzhemiliev.  From September the offensive against the Mejlis gained pace and has continued ever since.

The Feb 26 ‘case’ targets only Crimean Tatars and seems clearly aimed at attacking the leadership of the Mejlis.  In the above-cited publication, Novaya Gazeta reported that the investigators had so little material that they invited Simferopol residents to come forward with reports of violence against them, even if they didn’t receive any injuries.   People who have been interrogated and / or detained report pressure and threats being applied to try to force them to  testify against Chiygoz.

Thus far the occupation regime has failed.  In the absence of good material for a show trial, it appears to have opted for long-term detention without a trial at all.