Sentsov-Kolchenko Trial: “Tanks don’t make distinctions about whom they crush" 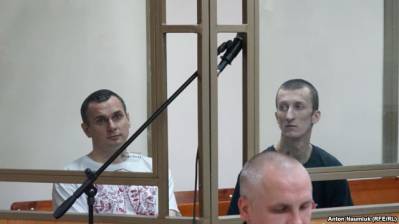 The third hearing was held on Wednesday in the trial of Ukrainian film director Oleg Sentsov and left-wing civic activist Oleksandr Kolchenko.

Mediazona reports that the court heard Alexander Pirogov, a ‘key witness’ who spoke about his collaboration with the FSB in connection with the activities of Oleksy Chirniy.  As reported, Chirniy and Gennady Afanasyev, two other Crimean opponents of Russia’s annexation, were also arrested in May 2014.  Both men have ‘cooperated’ with the prosecution for a minimum (7-year) sentence and the case against Sentsov appears to be entirely based on their testimony.

The prosecution claims that Pirogov, a 27-year-old student was supposed to provide the ‘terrorist group’ with home-made explosive devices.

According to its version, “no later than April 10” Sentsov suggested that Chirniy and Afanasyev blow up the monument to Lenin in Simferopol and gave Chirniy 200 UAH to buy a bomb. Chirniy approached Pirogov and asked him to make it.  Sentsov  is alleged to have given instructions to Chirniy “via Afanasyev” regarding the necessary details of the explosive device.  Sentsov is then alleged to have decided to carry out another explosion of the Eternal Flame on Victory Day (May 9) and Pirogov was asked to prepare other explosive device. During the early hours of May 9, Chirny allegedly tried to pick up the two devices and was detained “red-handed”.  Afanasyev was arrested soon afterwards.

As the defence demonstrated during questioning, the amounts which Pirogov is supposed to have been given – 100, then 200 UAH – were extremely small (even at the exchange rate then around 25 EUR).  He claims that he was doing it (or so Chirniy thought), for no payment at all.

As reported earlier, all four Ukrainians were held for weeks without access to lawyers or relatives before being taken to Moscow. Sentsov and Kolchenko assert that they were tortured, and Sentsov says that he was told that if he didn’t provide the testimony they demanded – against Euromaidan, Right Sector and the new government in Kyiv - they would charge him with masterminding everything.  Both men refused to make such ‘confessions’.  Sentsov is now accused of organizing the alleged ‘terrorist plot’, and Kolchenko of being a part of the terrorist group and of one specific fire bomb incident

Chirniy and Afanasyev both gave ‘confessions’.  Afanasyev’s trial was effectively held in secret with the other men’s lawyers only finding out after he had received a minimum 7-year sentence.  Chirniy has since also received the same sentence.

Pirogov stated in court that after being approached by Chirniy, he spoke with a ‘self-defence’ paramilitary acquaintance who advised him to report Chirniy to the FSB.

During the cross examination, Sentsov’s lawyer Dmitry Dinze ascertained that Pirogov had two very recent criminal charges against him – for theft and for possession of marihuana.

The prosecutor constantly asked if Chirniy had been acting alone.  Pirogov could give no details at all, but thought that there was a group.  Asked why Chirniy had wanted to cause damage to the monument to Lenin, Pirogov answered:

“He said that this would arouse protests, and the Crimean population would understand that they didn’t need Russia”.

Pirogov also said during questioning that his knowledge was not sufficient to prepare the explosive device.  He went to Chirniy’s hostel where Chirniy allegedly phoned “Gennady” and told the latter that they needed contact via skype with somebody in Kyiv. They spoke with a person introduced only as Grisha.  Dinze says that this is supposed to be Stepan Tsiril  who the prosecution is claiming is a member of Right Sector.

This Grisha gave the advice and also supposedly asked to post leaflets with the message: “Tanks don’t make distinctions about whom they crush”.

The prosecutor read out testimony obtained earlier from Pirogov in which the latter claimed that Chirniy had told him on May 4 that more serious targets would be chosen after the Lenin monument in order to disrupt the tourist season.

He also read out Pirogov’s initial report to the FSB which states, in a form suspiciously close to that in the indictment, that he considers that Chirniy’s actions “are of an unlawful nature and could lead to destabilization in the region.”

The questioning, both by Dinze and Kolchenko’s lawyer, Svetlana Sidorkina, ascertained that:

Pirogov had never seen or spoken with any of the suspects in this case, except Chirniy, nor had the latter mentioned any names (aside from when he rang somebody called Gena [Gennady, who could be Afanasyev);

Pirogov did not have the knowledge needed and it is unclear from his account why Chirniy should have turned to him.  He became muddled in his answers to questions from Sidorkina.  Asked initially why he had agreed, he claimed that this was because Chirniy “was a quite serious man. He spoke seriously and just needed some kind of help.  He had already bought some substances”.  He wasn’t concerned that the explosive could pose a danger since his “wouldn’t have worked”.