Savchenko Trial: ‘Fort Knox’ Security and 300 kilometres on the road 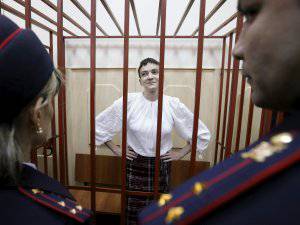 The long-awaited preliminary hearing in Russia’s trial of Ukrainian MP and former military pilot Nadiya Savchenko in Russian Donetsk on Thursday was adjourned shortly after beginning.

In defence lawyer Mark Feygin’s words, the court building in Russian Donetsk “was guarded like Fort Knox” on July 30 for the closed hearing.  Savchenko was brought from a remand prison in Novocherkassk 150 kilometres away which would mean three hours minimum a day on the road.   All of this was known well in advance, yet it required the grotesque performance on Thursday for the court to allow the defence’s application to have the place of trial reconsidered.  The question of where the actual trial should take place has now been sent to the Rostov Regional Court.

The defence argued that the trial should be moved from Russian Donetsk since the latter did not provide the necessary conditions for a fair and objective court trial.  Radio Svoboda reports that the application was supported by the prosecution which was doubtless why the court agreed.

One of Savchenko’s lawyers, Ilya Novikov called the decision “a question of common sense”.  It was, but the decision is much belated.

As reported, Savchenko made a formal appeal back on July 17 to Russia’s Prosecutor General to have the trial moved to Moscow where all investigative activities had been carried out.

The appeal was totally ignored with Savchenko being taken that day or the next from the prison in Moscow.  The journey to Russian Donetsk took a long time with it requiring intervention by Russia’s Human Rights Ombudsperson Alla Pamfilova to even ascertain Savchenko’s whereabouts.

It is not clear where she will be held until the decision is formally announced as to where the trial will be held.  Or until some other arrangement has been reached.  Feygin has repeatedly spoken of negotiations underway for Savchenko’s release as part of an exchange.  What grounds he has for such assertions is not known.

More details about the charges which Russia has laid against the former pilot, now Ukrainian MP and PACE delegate can be found here: Savchenko material shows how Russia concocted ‘case’ and what it can’t conceal

Those details and the material constantly provided by the defence which demonstrate that Savchenko has an alibi for the time of the alleged crime make it quite clear how much Russia has to lose by letting this case come to trial.