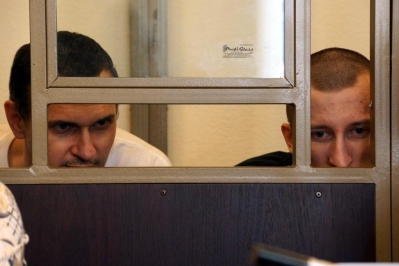 Gennady Afanasyev, one of the four opponents of Russia’s annexation of Crimea has refused to testify in the trial of Oleg Sentsov and Oleksandr Kolchenko and stated that he gave testimony earlier under duress.  The charges against the two men are effectively based solely on Afanasyev’s ‘confession’ and that of the fourth person – Oleksy Chirniy.

Chirniy appeared in court on Thursday.  He refused to give testimony in court, citing Article 51 of Russia’s Constitution that allows him to not testify against himself, yet stated that he did not retract his earlier ‘confession’ and testimony.

Both men gave ‘confessions’ immediately and have since cooperated with the investigators.  They therefore received 7-year sentences, the minimum number under the ‘terrorism’ charges.  Sentsov and Kolchenko are facing from 15 years to life.  The latter have both insisted from the outset that they were subjected to torture and that Sentsov was told that if he didn’t ‘confess’, he would be charged as the ‘mastermind behind a terrorist plot’.

Neither man ‘confessed’ and Sentsov is now charged as having organized and masterminded a supposed ‘Right Sector’ plot and left-wing activist Kolchenko of having been part of this far-right ‘conspiracy’.

Afanasyev’s statement on Friday that he also gave all testimony under duress essentially confirms what everybody has assumed since the beginning.

It took a great deal of courage given that he is now totally under the control of the Russian authorities, and reportedly even agreed to take on Russian citizenship – probably also under duress. 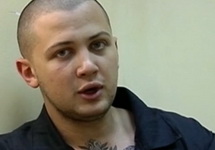 Mediazona reports that Afanasyev was brought into the courtroom just after midday on Friday.   Asked if he knew the men in the ‘aquarium’ or defendants’ box [i.e. the defendants Sentsov and Kolchenko] he answered:

“All of Ukraine knows Sentsov. I don’t know the second person”.

“Afanasyev then stated that he refuses to testify. The witness explains that  everything said earlier was said under duress. At the witness stand, Afanasyev’s hands are shaking. One is clenched in a fist behind his back, the other in a handcuff changed to the person bringing him. Sentsov and Kolchenko applaud him from their box.

“Glory to the heroes!” - Afanasyev answers’

The Grani.ru reporter adds that Afanasyev said that he admitted his part in the actions, “but those people weren’t there”.

The court hearing simply continued with earlier testimony being read out even though Afanasyev had stated clearly and at risk to himself that it had been given under duress.

The same process was seen during the Thursday court hearing, although with more cause since Chirniy was not willing to testify in court but stopped short of retracting his earlier testimony.

That testimony indicates that Chirniy was indeed involved in the two firebomb attacks on pro-Russian organizations which played an active role in Russia’s annexation, as well as in the plan to plant an explosive device at the monument to Lenin and probably also at the Eternal Flame.   Evidence not linked with his confession and later cooperation with the investigators could give the prosecution grounds, though no solid proof, for suspecting Afanasyev, but give no justification at all for any charges against Sentsov and Kolchenko.

It was very noticeable from the reading out in chronological order of Chirniy;s interrogations that more and more claims were emerging over the months of a supposedly major role played by Sentsov.  There were also some telling contradictions.  In the protocol of his very first interrogation, on May 9, 2014, Chirniy said that “Gennady” had asked each participant in a meeting of people who were against annexation if they had friends with pyrotechnical knowledge. By June 4, Chirniy was stating that it was Oleg Sentsov who had asked.

During interrogations in October and November, there was huge emphasis on Sentsov and his supposed role in Right Sector.  Earlier his testimony contained phrases suspiciously close to that in the prosecution indictment.  Sentsov, for example, was alleged to have said that an explosion at the monument to Lenin “would create panic among civilians and lead to a destabilization of the situation”.

As reported, the defence has repeatedly asked witnesses for the prosecution to explain how two fire bombs which caused minimal damage to two buildings, and an explosion at the Lenin monument were supposed to “destabilize the situation and act on the authorities so that they take the decision to leave the Russian Federation”.   The answers have raised from the implausible to the comical.

Another sadly comical element in Chirniy’s statements was the claim that Sentsov had met with Chirniy, Afanasyev and two other people and demanded that they speed up the process of blowing up the Lenin monument.  When Chirniy suggested that the law enforcement bodies could arrest them if anything went wrong, Sentsov, he claims “went into another room and demonstrated a Makarov pistol, and showed that it was loaded with what seemed like real bullets, and said “We have something to defend ourselves with!”.

The Makarov pistol was found when the FSB arrested Sentsov and searched his home on May 10.  According to Sentsov, the weapon is of historical value only.  It was in any case the only one found and most certainly poor ‘defence’ against the heavily armed Russian soldiers and paramilitaries who had seized control in Crimea.

There does not appear to have been any response from either the prosecutor or the judge to Afanasyev’s retraction of his testimony and statement that he didn’t give it voluntarily.  The prosecution was presumably hoping that it he continued as though nothing had happened, Afanasyev’s brave move would be forgotten.

See here and in the links below for more details about the previous court hearings and the case in general.