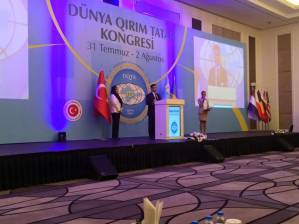 The World Congress of Crimean Tatars is asking the international community to ensure that Ukraine’s territorial integrity is restored and that Russia answer for its crimes against the Crimean Tatar population at the International Criminal Court in the Hague.

This Second World Congress took place in Ankara, Turkey on Aug 1-2.  There was no possibility of holding it in Russian-occupied Crimea and, as reported, some prominent Crimean Tatars from the Mejlis [representative assembly] and Qurultay [congress] of the Crimean Tatar People were prevented from leaving Crimea to attend the event.  Others faced considerable harassment and intimidation as Russia and the leaders it installed at gunpoint tried everything to prevent the Congress.  This could not, in any case, have been held in Crimea given that Russia has banned  Refat Chubarov, Head of the Mejlis and of the World Congress, and veteran Crimean Tatar leader Mustafa Dzhemiliev from their homeland.

Ukraine’s Foreign Minister Pavlo Klimkin spoke at the opening ceremony, first reading out an address to the Congress from President Petro Poroshenko.  This announced plans to draw up “a road map for giving Crimea – historical homeland to the Crimean Tatar People – the status of a national-territorial autonomy within Ukraine. »  The Foreign Minister then gave his own, very moving address, including the following:

“This is a meeting at a difficult time, one full of challenges.  It is a time that places each of us before the choice – whether to understand or not understand; whether to speak or be silent; whether to open our eyes or chose to not see.  To fight or to give in.  I thought about that recently when a delegation of French politicians visited Crimea.  They decided to shut their eyes, and were feted by the occupation regime…”

He spoke of the countless victims of disappearances, abductions and killings, and of the first victim – Reshat Ametov who was seized while holding a lone picket in protest at Russia’s invasion, and tortured to death.

Klimkin then went on to say how difficult it was to be speaking there.

His address was greeted with enthusiasm and cries from the audience of “Slava Ukraini” [Glory to Ukraine!].

Video address by Ilmi Umerov, one of the Crimean Tatar leaders prevented from leaving Crimea to attend the Congress (Photo: QHA)

On Aug 2 the Congress adopted an appeal to the UN, to all countries respecting human rights, rule of law and democracy, to international structures and NGOs, and to the international community in general.

The appeal covers earlier crimes committed against the Crimean Tatar People, then speaks of Russia’s violation of international law and human rights in annexing Crimea and systematic violation of Crimean Tatar rights since then.  It asks that “all necessary measures be taken to ensure an urgent end to the illegal and barbaric occupation by the Russian Federation of the Crimean peninsula.”.

It calls for help in facilitating the investigation of Russia’s constant repression and crimes against the Crimean Tatars at the International Criminal Court, as well as investigation, arrest and punishment of those officials who helped them commit such deeds.  It will be gathering evidence for use together with the reports of various international organizations, etc. to put the occupiers and their accomplices on trial.

The authors mention over 20 disappearances/abductions of Crimean Tatars over the last 18 months, of whom 3 were tortured and killed.  Hundreds of Crimean Tatars who were expressing their strong opposition through democratic methods have been illegally detained. Attempts have been made to intimidate them with fines; searches; systematic arrests and interrogations. Crimean Tatar leaders have been banned from their homeland, while the Deputy Head of the Crimean Tatar Mejlis, Akhtem Chiygoz remains imprisoned, together with Ali Asanov and Mustafa Degermendzy.  Assets belonging to the Mejlis have been confiscated, the Crimean Tatar media silenced; Crimean Tatars dismissed or faced other forms of economic and social pressure and other violations.

The World Congress of Crimean Tatars calls on the world to:

The participants end by confirming their commitment to the principles of respect for human rights, rule of law, democracy, peace and harmony.