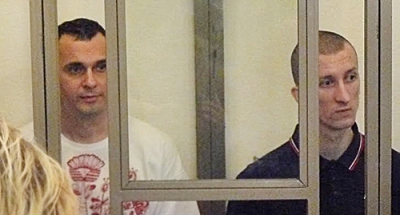 The renowned Memorial human rights organization has condemned Russia’s trial of Ukrainian film director Oleg Sentsov and antifascist activist Oleksandr Kolchenko and stated that it considers both men to be political prisoners.  Memorial’s statement was issued on the same day that secret ‘witnesses’ made entirely unprovable allegations against Sentsov in court and main prosecution witness Gennady Afanasyev confirmed that his ‘confession’ had been extracted through torture.  Although the fourth opponent of Russia’s annexation of Crimea Oleksy Chirniy only refused to give testimony in court while not retracting his ‘confession’, he had earlier told the Ukrainian consul and lawyer that his testimony was given under duress.

Memorial explains that the case had been seen as political by human rights groups from the outset and accompanied by flagrant breaches of human rights and international law.  The secrecy, however, and fact that the lawyers were forced to sign undertakings not to reveal any details meant that Memorial was unable to fully analyse the case and available material.

They note that the charges against Oleg Sentsov of organizing a terrorist society, of involvement in the firebomb attacks on two offices and attempt to blow up a Lenin monument, with these being categorized as terrorist acts, etc. could carry a life sentence.

Sentsov is alleged by the FSB to have led a terrorist group and issued commands to its members.  The only corroboration of these commands was the testimony of Chirniy and Afanasyev who made a deal with the investigators, receiving minimum 7-year sentences rather than the 20 years or life Sentsov and Kolchenko are facing. .

Memorial points out that Afanasyev retracted his testimony on July 31, saying that it had been given under duress, while Chirniy had previously told the Ukrainian consul that he had been subjected to beatings and threats when detained.

As reported, the prosecution has produced secret video footage of conversations between Chirniy and Alexander Pirogov whom Chirniy had asked to help him make a homemade explosive to damage the Lenin monument.  Pirogov was acting as an FSB informer.

Memorial has studied the video and considers that it refutes the prosecution’s claims of a terrorist group being implicated in both the firebomb attacks and the plan to blow up the monument. “Chirniy repeatedly says that he is making the explosive device on his own initiative and is planning the explosion with people who are neither suspects nor defendants in this case. These discrepancies in the evidence were ignored by the investigators. Some of the assertions of the prosecution were in our opinion concocted by the investigators”.

It is unacceptable, Memorial states, to prosecute a person on the basis of such shoddy evidence.

The situation with Oleksandr Kolchenko is different in that he admits to having taken part in the firebombing of the office of the United Russia party on April 18, 2014.  His role was to watch the street while Chirniy and another person – Nikita Borkin – threw the firebomb.  Kolchenko admits to his involvement, but he and his lawyer, Svetlana Sidorkina reject the charge of ‘terrorism’.

Memorial agrees that the act had nothing to do with terrorism. The attack was committed at night when the participants understood the office to be empty and there was no intention to put anybody’s life in danger. No demands were made and there was no demonstration of an intention to frighten the population. A window was broken and varying assessments speak of between 3 and 5 square metres inside the office being burned.

At the time of the attack, the Simferopol branch of United Russia was not even registered which Memorial suggests means that it should not have been given victim status.  There have been a number of arson attacks on United Russia offices in various parts of Russia beyond Russian-occupied Crimea over recent years.  They have been prosecuted as deliberate destruction of property or hooliganism, with even the maximum sentences under those articles 3 or 4 times less than for terrorism.

“The prosecution of Kolchenko is thus incommensurate both with the damage caused, and with standards of Russian practice”.  There are also no grounds for the charge of involvement in a terrorist organization, since Kolchenko is only accused of having taken part in one unlawful action with others considered implicated in the case.

Among the many reasons that Memorial considers this case to be political is the “constant inappropriate mention of Right Sector.” There is no evidence that either Kolchenko or Sentsov had anything to do with that ultranationalist organization.  The latter’s views were also totally alien to Kolchenko who is an anarchist and antifascist.

“We assume that Right Sector is being foisted on the indictment in order to create a primitive media image of a nationalist threat in Crimea.”

Memorial is also scathing of attempts to force Russian citizenship on the men (more details here).  It points out that this results in manifest violations of their rights, with them being prevented from seeing the Ukrainian consul and from being defended by a Ukrainian lawyer.

The case was investigated with major infringements of the men’s rights and of international law.  Russia has also failed to investigate serious allegations of torture and threats by the FSB.

Memorial demands Sentsov’s immediate and unconditional release, and a full investigation into his allegations of torture. The charges against Kolchenko involving terrorism should be dropped and the offence given more appropriate classification. He should also be returned to Crimea and the efforts to foist Russian citizenship on him must stop.

While both Chirniy and Afanasyev admit to involvement in the firebomb incidents, and Chirniy at least was clearly implicated in the plan to cause damage to the Lenin monument, the question arises here also of whether these actions warrant a conviction and 7-year sentence for ‘terrorism’.

The main question, however, concerns the nature of any of their testimony.  Afanasyev has told his lawyer Alexander Polkov that he was tortured into giving testimony against the other men. He told Polkov that he had fully considered his statement in court on July 31 retracting all evidence. There had never been any terrorist group, and while he does not deny the actions he was charged with, he says that they did not constitute terrorism.. “This was all the investigators’ fantasy which he signed without reading. He was beaten, tortured, threatened and tormented. That happened mainly in Crimea, but there was also psychological pressure at the Lefortovo remand prison in Moscow”, Polkov explains.

Afanasyev has already been told after his statement in court on Friday that he’ll “go somewhere very far”.  He is clearly stressed and frightened for his life.

He has not, however, backed down.  Quite the contrary, he asked Polkov to pass on his apologies to Sentsov and Kolchenko and to say that he felt ashamed that he had caved in.

Polkov points out that a year or more on it would be difficult to prove torture, but his testimony is very similar to that given by Sentsov.

Both Memorial and Amnesty International have now called for the charges against Sentsov and Kolchenko to be dropped.  Four men were arrested in May 2014, taken illegally to Moscow and charged with involvement in a non-existent ‘terrorist’ plot.  There are compelling grounds for believing that Afanasyev is now telling the truth, and that he testified against himself and all the others under torture, as probably did Chirniy.  There is unfortunately equally strong reason for believing that Afanasyev could be in danger, if not now while the trial is continuing, then later once it is over.