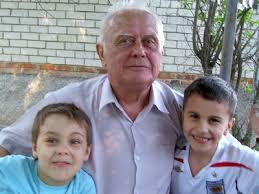 73-year-old Yury Soloshenko’s detention has now been extended until Oct 5, meaning that he will have been held for 14 months on mystery ‘spying’ charges.  Nobody has any idea whether the investigators even have any charges since the case material has been classified as ‘secret’ and Ivan Pavlov, the lawyer Soloshenko and his family had chosen was illegally prevented from seeing his client.  Soloshenko is now ‘represented’ by a new lawyer provided by the state, Gennady Blokhin.  Judging by the manner in which the investigators violated Soloshenko’s right to the lawyer of his choice, there seem good grounds for concern as to whose interests this new lawyer will be serving.

Human rights activist Zoya Svetova last saw Soloshenko on Aug 1 when he complained to her of his health problems.  Doctors are periodically called to the SIZO [remand prison] to take ECT readings.

She UNIAN that she believes the FSB [Security Service] have made some kind of promises to Soloshenko, probably in exchange for his giving up the lawyer whom he had chosen and who would have certainly represented him properly.  He expects a trial in September and believes that he will receive a suspended sentence.  She is sceptical both about the chances of such a sentence and regarding the likelihood that the FSB would keep their word.  She says that perhaps he will be convicted, but then pardoned. It is just as possible, however, that he will remain imprisoned.

Soloshenko’s son Vladislav calls the charges insane nonsense  His father is long retired, and believes he was simply tricked into coming to Moscow.  A former colleague insisted on him coming for a business meeting connected with buying and selling equipment.  When he arrived on Aug 5, 2014, and went to the place arranged, he was immediately seized by FSB officers.

Svetova wrote earlier that in many years of visiting people held in detention, she had never seen such flagrant violation of Russia’s Constitution as in the case of Yury Soloshenko.

More details about his case here.

Soloshenko is not the only Ukrainian national whose case seems directly linked with Russia’s aggression against Ukraine.  There is equal secrecy about Valentin Vihivsky, and the charges against Serhiy Litvinov, a cowherd from Donbas, arrested and tortured after entering Russia due to acute toothache are simply grotesque.  There is total secrecy over the charges against lecturer Stanislav Klykh, and the whereabouts of Mykola Karpyuk remain unknown well over a year after he was effectively abducted and taken by force to Russia.