7 months in Kremlin-backed militant captivity: "You expect to die every day" 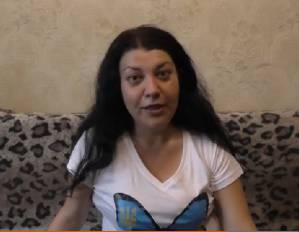 Screenshot from the Radio Svoboda video

Crimean Tatar volunteer Gaide Rizayeva spoke in a Radio Svoboda interview of the terrible uncertainty and lawlessness of her months held hostage by militants,  and of her belief that Crimea will again be Ukrainian. If nothing else works, she and other Crimean Tatars will be willing to take up arms to liberate their homeland, she says.

Gaide Rizayeva was taken hostage twice by Kremlin-backed militants in Donbas.  She spent 7 months altogether and says she wouldn’t wish that on anybody, but she would like at least one Ukrainian parliamentarian to experience a single day of such captivity. That would surely make them accelerate the exchange of all prisoners, civilian and military.

It is impossible to simply explain what such captivity is like, she says. It’s not like prison, where there are at least rules.  This is different, and terrible.  “You expect to die every day and live in uncertainty, when the door of your cell opens and you don’t know how the day will end. Last year separatists killed people in front of us so that we would begin telling the truth. A lot of people were killed, many will not now be found”.

In her interview for Radio Svoboda’s Crimean Service, Rizayeva explains that she worked in Crimea for 10 years as a lawyer before Russia’s annexation.  Her life was changed first by Euromaidan and then the events that began with Russia’s invasion.   She was first involved in resettling people forced to leave Crimea and Donbas, but then became a volunteer in the military zone.

She was taken prisoner the first time on July 22 at one of the so-called ‘Luhansk people’s republic’ [‘LPR’] checkpoints while trying to take humanitarian aid to Ukrainian soldiers.  That time she spent three and a half months in captivity before being exchanged for separatists (the word she uses).

She was met by the Patriot prisoner exchange group and subsequently joined them.

Then earlier this year, after taking humanitarian aid for prisoners held by the ‘LPR’ , she took part in an attempt to evacuate children suffering from tuberculosis from Alchevsk. The cars were searched at a checkpoint and the militants found ammunition in the driver’s car and seized them all.  She spent four and a half months in captivity this time, and there was even the danger that they would pass her over to the Russian Investigative Committee because of her Crimean registration.  It is that Committee which has come up with the charges against former pilot and now Ukrainian MP Nadiya Savchenko after she was captured by ‘LPR’ militants and taken by force to Russia.

Thankfully Rizayeva was instead part of an exchange near Shchastya, together with 10 soldiers.

She explains that it is actually harder to rescue civilians like herself from captivity, than soldiers.  “There is no mechanism for exchanges of civilians, after all they should simply be released”.  The ‘LPR’ even has a document it calls its constitution and that states that charges must be presented within 48 hours.  There were no charges, just captivity for four and a half months.

As reported here, there is at least one other woman who has been held hostage for well over 6 months now.  30-year-old Luhansk journalist Maria Varfolomeyeva remained in Luhansk to care for her elderly grandmother who was unwell.  She was seized by militants on Jan 9, 2015.  Despite the fact that she was taken prisoner at a time when there was no shelling in Luhansk, the militants tried to claim, as Russia has with respect to Savchenko, that Maria Varfolomeyeva had been a ‘spotter’.  She has twice now been forced to give videoed ‘interviews’, the second for the Russian propaganda channel Life News.  She is very clearly being placed under enormous pressure (more details here)

Crimea will return to Ukraine

Gaide Rizaeyeva says she is “almost certain that Crimea will once again be part of Ukraine”.   Crimean Tatars, she affirms  “will return, and much stronger than before. Nothing will ever break us in this life”.   Asked if she would be willing to fight for her homeland, she answered:

“If all other options have been exhausted and nothing else remains but to take up arms, we, I included, are willing to take up arms and liberate our land.

Each ethnic group has the right to their homeland and we Crimean Tatars have gone through very much, we lost many of our relatives.  Out of respect for the graves of our ancestors we would indeed take that step.”

The Crimean Tatar People were deported from their homeland in May 1944.  Over 190 thousand men, women and children were forced, with immense brutality, onto trains and sent east, to Uzbekistan.  Another 11 thousand young men were sent as forced labour.  All of this, on Stalin’s order and at the hands of the NKVD, was carried out in the space of three days.  J. Otto Pohl called it “one of the most rapid and thorough cases of ethnic cleansing in world history”.  Up to 100 thousand Crimean Tatars are believed to have died en route or in the first period of exile.

It was independent Ukraine that formally allowed Crimean Tatars to return to their homeland.  Successive Ukrainian governments possibly didn’t have the money, but certainly lacked the political will, to carry out all the work needed to help Crimean Tatars rebuild their lives in Crimea and reinstate their  rights.  For all of the mistakes and failed opportunities of the past, it seems fair to say that the vast majority of Crimean Tatars want Crimea to remain part of Ukraine and have viewed Russia’s occupation with fear and suspicion. All fears have unfortunately proved justified.