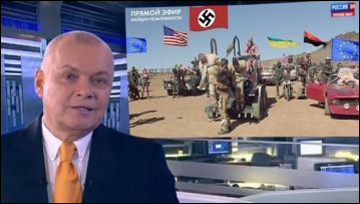 Dmitry Kiselyov, best known for his claim that Russia could turn the USA into radioactive dust  (photo from Naviny.by)

A day after the bloody carnage on Maidan, journalist Lidia Pankiv used a live TV show to tell the presenter and all other journalists implicated in the lies and propaganda on Ukrainian TV that they had blood on their hands. 18 months later the same must be said of those working for Russia’s TV propaganda machine, and some of them know it.

Colta.ru spoke* with three former employees of mainstream Russian channels on condition of anonymity, and with Stanislav Feofanov, who formerly worked for REN TV.  The picture painted cannot be formally verified but it is depressingly close to the similar degradation of the profession seen in Ukraine under Viktor Yanukovych’s presidency.

This was what an employee of one of the mainstream channels was told in February 2014 by the Chief Editor.  The latter gathered the staff of the All-Russia State Television and Radio Broadcasting Company (VGTRK) and told them that if they didn’t want to take part, they should find another job away from information channels.

Only a few were to leave over the coming months, the others all stayed.

The anonymous source says that the top managers had meetings in the Kremlin after which they would turn up at the channel and hold their own sessions with a select few.  After that instructions would be filtered down.  It was all extremely secretive, with no open discussions.

Such exclusive meetings took place, for example, with the presenters who needed to know which terms to use, like ‘junta’, ‘fascist’ ‘Bandera supporters’ etc.  The source points to the variations, depending on the political situation.  On the eve of the Minsk negotiations, for example, or when decisions were due about sanctions against Russia, terms like ‘junta’ would disappear, only to reappear later.

The same applied to subject matter.  For many months Igor Girkin [Strelkov], the Russian military intelligence office who played an extremely active role in Russia’s seizure of control of Crimea and in the military action in Donbas, was constantly on television.  Then he needed to be removed for a while.

Colta.ru has concentrated on TV, but all of this has been seen as well in the state-controlled media and news agencies, like RIA Novosti.  Even Girkin’s criticism of the militants or of the Kremlin, not to mention news of the replacement of certain militants by others would only appear in the mainstream Russian media if it had the OK from above

The source explains that after the so-called referendum in Crimea in March 2014, there had to be at least one story, if not more, from Crimea each day, with the accent clearly on how things were blooming and people happy to have “re-joined Russia”.

There was no discussion of what should not be discussed. “No need”, that was clear.

In contrast to the Russian-Georgian War, the source says, the system was fine-tuned and well-prepared over weeks, months and years.

Perhaps most disturbing is the source’s estimate of people’s motives.  He believes around 40 to 50 percent were people – like him - who might themselves have been on the anti-Putin demonstrations in 2012, and who were revolted by what was happening.  Not enough so to leave, however – they needed a job.  The source believes that around 25% genuinely believed that what they were doing was right, and the rest simply didn’t care.

“Everybody understands the shit that we’re caked in, what is happening in the country. You don’t need to yet again poke at your sores and stamp on your corns again. But when you yourself produce all of this, probably after a while, weaker people begin to believe in it.  86% for Putin, that’s a reality”

One of the other former employees says that there was some freedom regarding reports on an accident somewhere in the Moscow region, etc., but not on any major political issues – then everything was decided at a level much higher than the channel’s management.

One of the people who clearly played the biggest role, the source says, was Dmitry Peskov, Putin’s Press Secretary.

The instructions even covered such things as the weather.  There needed to be predictions of a terrible winter, to raise the threat of gas cut offs.  It seems this may have triggered some degree of shame, as members of film crews had elderly people coming up to them, concerned at such predictions.

The third person speaks of overt deception of people interviewed, and the scenes presented.  Footage can always be twisted and presented as needed.

There were people there who were originally from Donbas, or from Ukraine, but they too, the source says, had no problems with providing the coverage required.

“Journalists and prostitutes are different only in that one lot do it with their body, the other with their brains.”

Stanislav Feofanov worked on a programme for REN TV that he says was different from other sources and tried to present issues objectively and from different points of view.  The programme’s fate was, however, always in the balance and the end came after the downing of the Malaysian airliner MH17.

“When they downed the Boeing it became unrealistic to tell the news as we did. They were shouting about a junta, butchers, who’d [allegedly] brought down the plane”.

Not just a job

Within minutes of the downing of MH17 on July 17, LifeNews and a number of other pro-Russian media reported the supposed “downing of a Ukrainian military transport plane” as reported by the Kremlin-backed militants.  As it became clear that a passenger plane had been down, the incriminating video footage disappeared, as did any mention of a supposed military plane.  From then on the Russian pro-Kremlin media told only lies and concocted one implausible story after another.

Both the downing of the airliner and its presentation in the Russian media received wide coverage in the international media, specifically because all the evidence said that the plane had in fact been downed by the militants, using a Russian Buk missile.

Other lies in the Russian media have been told with greater impunity.  The tragic disturbances and fire in Odesa on May 2, 2014 are constantly presented in the Russian as a massacre, with the channels the above-mentioned sources worked for claiming that the building was deliberately set alight by ‘nationalist radicals’ who clubbed those trying to escape to death.

There have been constant distortions, fakes, claims of genocide, mass graves, even of a young boy being ‘crucified’.

The third person interviewed said that before the events in Ukraine, their ‘enemies’ were various “Rothschilds, Morgans and some kind of capitalist plot to poison us through bad food and raise or lower the price of oil”.  Now the subject matter was “much more interesting”.

Much more murderous as well.  At the memorial procession on March 1, two days after Russian opposition politician Boris Nemtsov was gunned down near the Kremlin,  many people carried placards reading “PROPAGANDA KILLS”.   The warmongering and lies in the Russian media and Kremlin-funded international media (Russia Today and Sputnik) have played a major role in Russia’s undeclared war against Ukraine.  So-called journalists have been complicit in this and, whatever excuses they find for themselves, they cannot wash the blood from their hands.

*   The anonymous interviews were recorded by Alexander Orlov, a former deputy chief editor on Rossiya 24 and Rossiya 2 who was sacked in July 2013 for posts in support of Kremlin critic Alexei Navalny.  The whole article was put together by Dmitry Sidorov.