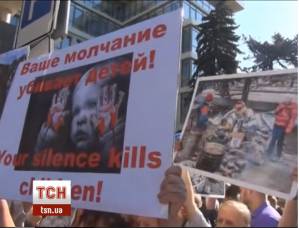 The arson attack on four OSCE armoured vehicles in Donetsk on Saturday night came days after the second of two ‘protests’ in which very professional placards, some in English, demanded that the OSCE monitors “open their eyes”.  The protests were widely reported on Russian television, unlike the many Special Monitoring Mission [SMM] reports of late that have noted militant infringements of the Minsk agreement.

Alexander Hug, the Deputy SMM Head, is reported to have called the arson attack which gutted three of the four vehicles, an act of “intimidation aimed at stopping the OSCE from reporting what is going on in the area."

Denis Pushilin issued a statement on the militants’ Donetsk News Agency expressing “outrage” and saying that an investigation had been initiated.  He claimed, unsurprisingly, that the “most likely” version was that it was the work of saboteurs (i.e. pro-Ukrainian activists, since the area is within the territory of the so-called ‘Donetsk people’s republic’).

He asserts that the militants want the mission to continue, despite claiming that they have not been “objective”.

It is not clear from the statement what Pushilin regards as “not objective”, but one can safely assume that the militants were not pleased with such elements of the SMM reports as the following:

“In Donetsk, at Chelyuskintsev Street located approximately 600m from the residence of SMM monitors, the SMM observed at one of the building missing and broken windows and facade metal panel damaged, apparently from inside. The SMM was denied entry to the building by two unidentified men. The SMM did not observe any other evidence of shelling in the neighbourhood. Three elderly women and one middle-aged man informed the SMM that they had heard at least one loud blast around 18:30hrs on 6 August.”

Both the building in question, and the unidentified men refusing access to what could well have revealed signs of clearly unlawful shelling, were in an area under militant control.

There have been two ‘demonstrations’ over the last fortnight – on July 23 and Aug 7.  The SMM reported both as having about 300 participants, while the Russian media that widely reported them spoke only of “hundreds”.

The report on the first demonstration makes it abundantly clear who was behind these supposed demonstrations.

From its location in the “DPR”-controlled city centre at approximately 7:45hrs, the SMM observed about 300 people, mainly women and children, walking past the parking lot and gathering in front of the SMM’s location. The SMM also observed a large civilian bus and two vehicles blocking the parking lot, thus preventing OSCE vehicles from leaving the area. About six men in civilian clothing were standing in front of an OSCE vehicle and preventing it from leaving the parking lot.  The SMM called “DPR” “police” for assistance at approximately 8:30hrs - after the crowd had grown and become more vocal. About two dozen  “DPR” armed men and as many as eight “DPR” “police” members - standing in groups of two or three - moving around the SMM’s location, were observed. “DPR” members did not prevent the crowd from gathering, nor did they deal with the blocked parking lot entrances.

Signs with messages directed towards the SMM and the International Committee of the Red Cross (ICRC) were displayed by the crowd in front of the location. The signs showed closed eyes and/or had slogans such as “Peace to Donbas” or “Time to open your eyes” in Russian and “Open your eyes!” in English. The SMM saw people spray-paint 30 SMM and 11 ICRC vehicles. The graffiti on OSCE vehicles also included painted eyes, slogans such as “Peace Donetsk”. The crowd dispersed at approximately 11:30hrs.

All of this, repeated on Aug 7, seems clearly aimed at providing the target audience – in militant-controlled Donbas and Russia – with the impression that OSCE and Red Cross are failing to notice violations from the Ukrainian side.  The reports can easily be accessed and can speak for themselves.