The West should not legitimize illegitimate, Kremlin-backed elections in Donbas 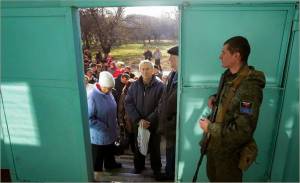 Western leaders placing pressure on Ukraine to allow elections aimed at legitimizing the so-called ‘Donetsk and Luhansk people’s republics’ should perhaps consider how much they wish to place their own commitment to democracy in question.  Militant leaders have refused to recognize Ukraine’s Law on Local Elections, and have now banned any Ukrainian media from covering the ‘elections’ they have scheduled in breach of Ukrainian law.  They have also imposed restrictions enabling them to prevent any real electoral choice.

On Aug 7, the ‘people’s council’ of the self-proclaimed and Kremlin-backed ‘Donetsk people’s republic’ [‘DPR’] adopted amendments to its ‘law’ which they claim are in fulfilment of the Minsk agreements “envisaging the holding of local elections taking into account Donbas’s special status”.

One amendment directly prohibits the Ukrainian media from covering the ‘electoral process’.  Such media are, allegedly, “implicated in stirring up civic enmity, circulating calls to violence or knowingly false information about the situation in ‘DPR’.”  It should be noted that Ukrainian media, including websites run by former Donbas journalists, are banned on militant-controlled territory, meaning that the population is already receiving its information mainly from the pro-Kremlin Russian media and websites, etc. loyal to the militants.

Only “citizens of DPR” who have lived on this territory for a year or more will be allowed to stand for election.   This restriction is explained as being fully in accordance with world practice.  In the present situation, it means that electoral choice is confined to whether you want one Kalashnikov-bearing militant or another. Donbas residents who fled because of the fighting or persecution for their pro-Ukrainian views are prevented from even trying to offer an alternative.

The amendments also mention the presence of “foreign observers” and state that these can include the OSCE’s Office for Democratic Institutions and Human Rights (ODIHR).

The OSCE has just faced a serious arson attack which followed clearly orchestrated ‘anti-OSCE demonstrations’ .  There has been another organized protest since in Luhansk with the same claims that the OSCE mission is not objective.  All of this may indicate attempts to force the Special Monitoring Mission out of Donbas.  Even if the OSCE remains, it is surely questionable whether the ODIHR should agree to observe ‘elections’ which are already illegal from Ukraine’s point of view, and in breach of democratic standards.  Although not specifically mentioned, it seems highly unlikely that Ukraine’s election watchdogs – OPORA and the Committee of Voters of Ukraine – would be allowed to act as observers.

Judging by the militants’ last ‘elections’, there is every reason to expect that the events would have little in common with the exercising of electoral rights.  The last ‘elections’ were held on Nov 2, 2014 in the presence of men with Kalashnikov rifles and amid sacks of potatoes, cabbages and carrots which ‘voters’ were able to buy for a pittance in exchange for their participation.  The event was condemned by Ukraine, western countries, and was ultimately only “respected” and not “recognized” by Russia.  The latter development was doubtless unexpected, since Russia’s friends from various far-right European countries, who came, observed and praised effusively had entered the militant-controlled territory from Russia after beginning their ‘observer mission’ in Moscow where they were put up in a five-star hotel.

Moscow’s role in the new stunt is scarcely in question.  Vladimir Socor from the Jamestown Foundation is quite clear that Ukraine is being asked to provide legal cover for ‘elections’ which Moscow will be orchestrating.

“Separate elections, if staged, would further advance the process of “DPR-LPR’s” secession from Ukraine. Insofar as this threat can be taken seriously, it is because Moscow originated it, not because Donetsk-Luhansk voiced it.”

The Minsk implementation process, Sokor writes, would in fact entail the ‘DPR-LPR’ holding elections on Oct 25, “nominally as part of Ukraine’s local elections, but de facto to be controlled and won by pro-Russia forces in this territory.”  If this were validated internationally, then “Ukraine would be saddled with a frozen conflict of a dual nature, military and constitutional; Russia’s aggression against Ukraine would conclusively be reduced to a problem between Kyiv and the “DPR-LPR”; while Brussels, Berlin and other European centres could soon initiate a rollback of economic sanctions and start rebuilding relations with Russia.”

It is Ukraine that is preventing this from happening, but with good – democratic – cause.  It cannot hold elections on territory that is not under its control, nor where none of what Sokor refers to as the legal and democratic prerequisites to any valid elections are in place.

“Urging Kyiv to go along with elections in the “DPR-LPR” is tantamount to overriding Ukraine’s legislation—as well as sacrificing the usual principles to the expediency of relations with Russia. “

Sokor names three “indispensable formalities” for elections on the territory in question. Ukraine must give its consent; the local elections must be formally connected with Ukraine’s constitutional and legal framework, and the ODIHR needs to help prepare and then observe the elections.

The Kremlin’s proxies have refused to recognize Ukraine’s law on the local elections or to in any way comply with Ukrainian legal demands for fair and honest elections.  They are insisting on holding their own events (‘DPR’ on Oct 18, ‘LPR’ on Nov 1) and have already adopted restrictions demonstrating that they are unwilling to even imitate democracy.  Moscow has already shown who it trusts to ‘observe’ such stunts.  Western structures and governments should beware.