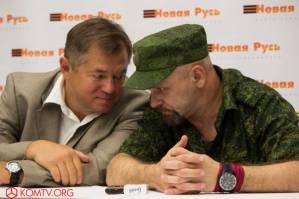 In a move of benefit chiefly for Russian propaganda, Ukraine’s Fiscal Service has barred 38 Russian books from being imported into Ukraine.  The ban is imposed “in order to prevent Ukrainian citizens being subjected to methods of information war and disinformation, the spreading of people-hating ideology, fascism, xenophobia and separatism, as well as to stop encroachments on Ukraine’s territorial integrity and constitutional system”.

Glazyev gave the opening address last August at a controversial conference in Yalta attended by a number of European fascists and neo-Nazis; Kremlin-backed militant leaders from Donbas and others, which was supposed to discuss the fight against the ‘fascist junta in Kyiv’.  In June last year a BBC correspondent demonstrated open incredulity when Glazyev very publicly called Ukrainian President Petro Poroshenko “a Nazi”.  The book banned is entitled “Ukrainian catastrophe. From American aggression to world war?”  Dugin and Limonov and their organizations have provided active support and training to militants in Donbas, as well as a considerable number of fighters.

Dugin refers to the conflict in Ukraine as “our offensive”.  On his Facebook page in August 2014 he wrote: “As we develop our offensive, an interesting point will emerge, namely: what are the borders of the DPR and LPR [Luhansk people’s republic], that is, the Federal State of Novorossiya?  Kyiv will not recognize us, but then we won’t recognize Kyiv.  What makes you think that we would stop on the borders of the former Donetsk and Luhansk oblasts?”

It is likely that the books banned contain page after page of denials of Ukraine’s right to exist, claims that it is a ‘failed state’, full of fascists, etc.   The number of books immediately banned, as well as the vaguely worded explanation as to the grounds, make it seem considerably less probable that they contain information or statements that directly breach Ukrainian legislation.

So why ban them?

Even if the books cannot be imported, they can almost certainly be downloaded from the Internet, making any ban theoretical.  Other material by the same authors is likely to be available in Internet publications, social networks, Youtube, etc.

Vaguely worded bans were frequently applied by Ukraine’s notorious Morality Commission with the list of material which the Commission noticed or ignored not infrequently influenced by the political climate of the time.  The recent dissolution of the Commission is a positive move.  The same cannot be said for the banning of any books in bulk without proper justification being provided.

Russia must be particularly delighted that Ukraine has provided such a propaganda opportunity right now.  Anything to deflect attention from Russia’s implementation of Putin’s shameful decree ordering that food falling under Russia’s counter-sanctions, be destroyed, rather than given to the huge number of people desperately in need.

Russia, of course, has nothing to boast about with respect to banned material.  It’s list of prohibited material contains around 3 thousand items, including such supposedly ‘extremist’ works as poet Alexander Byvshev’s poem “To Ukrainian Patriots”, material about an initiative asking for slightly more autonomy in Siberia;  material about Holodomor, or the manmade Famine of 1932/33 in Ukraine, and others.  The authors are also labelled ‘extremists / terrorists’, with this leading to a whole range of serious consequences.  Draft laws are currently being drawn up proposing up to 10 year terms of imprisonment for what Russia’s rulers deem ‘anti-Russian propaganda’.  Putin recently also signed a law increasing fines on the media for something termed ‘propaganda of extremism’.

It is precisely because of the scale of control over the Russian media, and blocking of many websites, that Moscow will have no problem with gaining propaganda mileage out of a Ukrainian ban.  Counter-questions will simply not be asked.

The greatest absurdity of this ban lies in the fact that one of the main sources of false and distorted information from Russia about Ukraine comes from the Russian Foreign Ministry, and that cannot be banned.