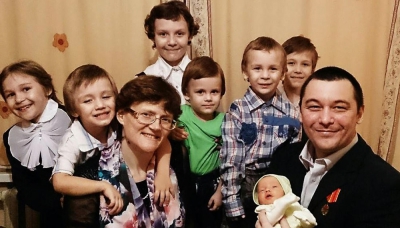 Russia’s Prosecutor General has found no violations in the criminal prosecution and detention of mother of 7, Svetlana Davydova.  The still breastfeeding mother from Vyazma (Smolensk region) was  arrested in January 2015 on charges of ‘state treason’ over a telephone call to the Ukrainian embassy about Russian soldiers being sent to Donbas.  Human rights activists had asked whether anybody was to face charges over her unwarranted arrest and detention.

The Prosecutor General’s confidence that all was in order is difficult to share.  The refusal to recognize flagrant infringements only confirms the suspicion that Davydova would still now be imprisoned had it not been for articles first in the Russian newspaper Kommersant and then by human rights activist Zoya Svetova, and public outrage.

In April 2014, Svetlana Davydova phoned the Ukrainian embassy in Moscow because she had grounds to suspect that the men from the military unit near her home were being sent on assignment to Donbas.  She hoped through her call to save lives.

On Jan 21, 2015, the FSB [Russian security service] turned up at her home, and despite the fact that she was still feeding her 2-month-old daughter, arrested her and took her to the Lefortovo Prison in Moscow, with a court finding no reason to not remand her in custody, initially for two months.

Davydova had already been in custody for 9 days when the media reports appeared.  A petition calling for her release from custody, was initiated by Novaya Gazeta immediately and had 40 thousand signatures by the time it was sent to the President’s Administration.

In her Jan 30 article, Svetova had reported that the lawyer appointed by the prosecution was concentrating on getting Davydova to ‘cooperate’ with the investigators and had not even tried to appeal against her detention.

Thankfully well-known lawyer Ivan Pavlov agreed to represent Davydova and she was soon released from custody, though on an undertaking not to leave Moscow.

Pavlov played a vital role in this case, demonstrating to the FSB that if they continued to charge Davydova with ‘state treason’, that would mean proving that she had divulged state secrets through her phone call to the embassy.  Since Russia is continuing to deny the involvement of its soldiers in the conflict in Donbas, this would prove embarrassing.

On March 13, they opted to terminate the criminal proceedings.  At the press conference announcing this, Svetlana Davydova made a point of calling for Nadiya Savchenko’s release.

In an interview shortly afterwards, Davydova said that even if she had known what awaited her, she would have still phoned the embassy.

One unfortunate consequence of the case has been the FSB’s illegal refusal to let Pavlov represent Yury Soloshenko, an elderly Ukrainian facing mystery spying charges.

For details of the military involvement which Russia is still trying to deny, see: Russian soldiers face prison for refusing to fight in Ukraine