85% of Russians against destruction of food, far less prepared to criticize Putin’s decree 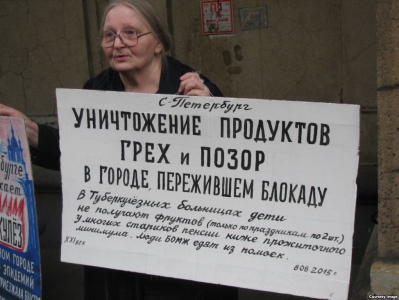 Protester in St. Petersburg: "It is a sin and disgrace to destroy food in a city that went through the Blockade (the Siege of Leningrad

One Moscow-based Polish journalist has called Russia’s destruction of sanctioned food items “a propaganda disaster”.  It is clear that Kremlin has noted the outrage and horror over its wanton destruction of over 500 tonnes of food so far in a country where a minimum of 23 million live below the poverty line and where people are literally going hungry.  It will also be aware that it is not only opposition politician Alexei Navalny who knows and can reveal details of how those in power are untouched by any of the hardships that sanctions and counter-sanctions are bringing to ordinary Russians.

The destruction is continuing unabated, however within days of President Vladimir Putin’s decree on Aug 6, pro-Kremlin media began trying to minimize the fallout.  From Monday there was no more footage of food being thrown into incinerators, bulldozed, etc.. The same media swiftly changed their tune from concentrating on compliance with Russia’s sanctions, to claiming that the food was of “dubious origin”, had not undergone the proper quality and safety checks and could be dangerous.   They have also been noticeably focusing on fruit and vegetables, rather than the ham, other meat products and cheese that have also been destroyed.

Putin’s role has been quietly forgotten, presumably in order to protect him from public outrage.   Some moves to deflect criticism from the Leader have been especially absurd.  A petition on Change.org, for example,  has been stopped in protest at another petition criticizing Putin’s decree. The petition’s initiator considers it “unacceptable to condemn the policies of our President”, and is unwilling to “support American provocation”.

Yulya Boiko from Rostov on the Don had launched the petition to get child benefit extended to three years.  She terminated it, she says, after the petition was initiated against the destruction of food.  The latter has, as of early morning on Aug 13, been signed by over 356 thousand Russians.  It calls for the President’s decree of Aug 6 ordering the destruction of food items to be revoked, and a law passed enabling the food to be distributed free of charge to those groups in Russia most in need.

“Why destroy food which could be given to veterans, pensioners, the disabled, those with large families, people suffering from national disasters or others in need?”

The number of signatories in just a few days is probably unprecedented in Russia, but also no surprise since a Levada Centre survey found that only 15% of Russians believe that the food should be destroyed. Most of the respondents said that it should be given to children’s homes, shelters for the homeless and hospitals, or to those in need.

Worryingly, however, when the question was put differently, there was a fairly marked difference in the figures.  Respondents were asked: “How do you view the decision to destroy food falling under Russian counter-sanctions?”  This time: 15% were totally against; 33% probably against; but 23% said that they were probably in favour, while another 17% announced that they were definitely in favour.  The other 15% said they didn’t know.

Alexei Grazhdankin, Levada’s Deputy Director told Vedomosti that it all depends on how the question is put.  “Supporters of destruction have arguments on a state level – people associate themselves with the country.  If on the other hand a person comes down to the everyday level, other motives come into play”, he asserts.

There is, of course, another interpretation, namely, that people hearing a question requiring open disagreement with the regime immediately back down and express support.

Yulya Boiko’s statement withdrawing her petition is dated Aug 10, and says that the decision is “in support of the President”. As well as writing that it is unacceptable to criticize the President’s policies, she claims that the site itself “has overstepped all boundaries.  My decision was also influenced by what I saw on this site”  It turns out, oh horror, that the site which she had herself had a petition on for the last 2 years is based in the USA!.

“I don’t want to support American provocation against our country. I ask all of you to not vote any more on this site. I’m sorry that I proved so lacking in foresight”.

Change, like many other websites, is indeed located in the USA.  It is for the reader to decide whether Boiko herself understands how this makes a petition asking that food not be destroyed but given to those in need “provocation”.  If she does, she’s not letting on.

Radio Svoboda has also engaged in what Boiko would doubtless consider “provocation”.   They have a quiz with which the reader can test their understanding of what 500 tonnes of food could achieve if not destroyed.

It could feed over 333 thousand people for a day (the population of Oryol).  Each of the 23 million people living beyond subsistence level would receive 22 grams of food; while the 605 thousand disabled children in Russia could have each received 826 grams of food.  The latter may not seem very much but it could have included the peaches or other fruit the many children growing up in institutions have probably never seen.

In February this year an 81-year-old ‘blokadnitsa’ – survivor of the Siege of Leningrad died in a St. Petersburg police station of a heart attack.  She had been detained in a shop and ‘handed over’ to the police after a few packets of butter were found in her bag.  It turned out – too late – that she had not even been trying to take them without paying, though how anybody could call the police even if there had been intention to steal is impossible to understand.  There are hundreds of thousands of elderly people in Russia scarcely able to afford the most basic foodstuffs these days, let alone the ham, cheese, peaches, tomatoes, etc. that Putin has ordered destroyed.

Moscow’s effective abandonment earlier this year of two Russian military officers captured in Ukraine should have been a lesson to Russians of how the regime treats those it is sending to fight and die in Ukraine.  It was a lesson, however, for a relatively small audience.  This time the Kremlin’s leaders have demonstrated their indifference for the entire population.