Putin’s decree classifying military deaths in Ukraine challengedDeadly secret: Putin criminalizes disclosure of Russian losses in UkraineRussian protesters demand withdrawal of Russian soldiers from UkraineNemtsov report exposes Kremlin lies and western pretence on DonbasNemtsov Report Says More Than 200 Russian Soldiers Killed In Ukraine WarNemtsov Allies Press U.S. To Punish Russian ’Propagandists’In Memory of Boris Nemtsov – Minute of NON-SilenceThe Anti-Semitic Coding in Putin’s Telegram to Boris Nemtsov’s MotherBoris Nemtsov: Yes, I’m afraid that Putin will kill meMariupol children forced to entertain and ‘thank’ the Russian soldiers who shattered their childhoodWagner PMC convicted killers ‘get clean slate, freedom and pardon" for fighting Russia’s war against UkraineRussian FSB uses total isolation to torture and try to break abducted Kherson woman 21-23-year sentences for three Belarusian heroes who helped Ukraine stop Russia from taking Kyiv His mother was shot, and the place of work was destroyed — Russian occupation harshly affected the life of Trostianets resident Serhii PentinShe said goodbye to life when the airstrikes made the houses collapse like a house of cardsRussia moves to legislate ‘impunity’ for all war crimes committed in occupied Ukraine Russia plans to imprison soldier who admitted to murder and plunder in Ukraine - for ‘circulating fake news’Four Russian invaders sentenced to 11 years for torturing hostages in Kharkiv oblast Belarusian rail partisan sentenced to 16 years for obstructing Russia’s invasion of Ukraine ‘There were more than five thousand of us in the shelter’ — account of the first war days in Mariupol
• Topics / The right to life
• Topics / News from the CIS countries 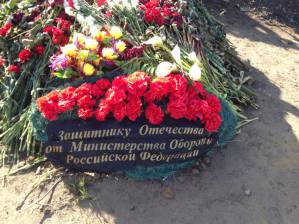 The grave of a Russian soldier  killed in Ukraine (photo: Ruslan Lebiev)

Russian President Vladimir Putin’s decree classifying information about military losses in peacetime as ‘state secret’ is legal, the Supreme Court has ruled.  It is unclear how the Court dealt with the compelling arguments presented against this view, but the result was unfortunately predictable.  Putin’s decree is widely seen as linked with Russia’s undeclared military engagement in Ukraine and can be used as a weapon against those trying to provide truthful information about the conflict, including details of Russian soldiers killed in the fighting.  It is no accident that the nine Russians who challenged the decree include Lev Schlosberg who first revealed details of the death in Ukraine of Pskov paratroopers; Svetlana Davydova, a mother of 7 arrested earlier this year on charges of ‘state treason’ for informing the Ukrainian embassy about Russian soldiers being sent to Donbas and a number of independent journalists reporting on the conflict.

Human rights lawyer Ivan Pavlov explains that their struggle is far from over, and that the ruling gives them grounds to apply to the Constitutional Court and force a proper assessment of how information in Russia is classified as state secret.

Putin’s decree of May 28 classifies information about Russian military losses during “special operations in peacetime”, without providing any definition of ‘special operations nor any clarity as to what information is to be concealed  Are only statistics about losses to be classified, for example, or any details of soldiers killed?  Experience up till now unfortunately suggests the latter, with heavy pressure reported on families to keep silent about deaths, as well as attacks and prosecutions of human rights activists revealing such information.

The nine applicants argued that:

Putin (and before him President Boris Yeltsin), had exceeded his powers by classifying information about military losses. Russia’s Constitution clearly states that the constitutional right to freely seek, receive and circulate information can only be restricted by federal law.

Yeltsin’s 1995 decree classified such information in wartime and Russia had not since then officially been war.  It was Putin’s decree which made the situation urgent since it enables the state to classify information about undeclared warfare concealed through the vague term ‘special operations’.

The Law on State Secrets does not give the President the power to extend the range of state secrets, and a decree is not a law.  The Law stipulates only that the President should, on the basis of Article 5, approve a List of information deemed to be state secret.

The move to have losses during ‘special operations’ classified as state secret was apparently initiated by Russia’s FSB [Security Service]; Military Intelligence Service and the Defence Ministry, with the relevant proposal being submitted by Prime Minister Dmitry Medvedev.   This information was presented by Putin’s representative in court, Natalya Yelina, who asserted that Putin had merely affirmed a list provided by the government.  She also apparently rejected the suggestion that a ‘special operation’ involving the death of soldiers should be viewed as an ‘exceptional circumstance’.

Putin’s Press Secretary Dmitry Peskov is reported to have stated that in the opinion of these bodies the additional information classified “best complies with the interests of the state.”

This view was not shared by Boris Nemtsov, the opposition politician gunned down near the Kremlin on Feb 27 this year.  The information he was gathering, and that has now been made into a report by his associates may well be deemed to fall under Putin’s decree. Schlosberg is reported to have said that if Putin’s decree had been in force 15 years ago, Russians would never have learned of the Kursk submarine disaster.  It remains to be seen whether the kind of information revealed by Soldiers Mothers of St. Petersburg, Lev Schlosberg, members of the Presidential Human Rights Councils and others over the last year will now result in charges of state treason.  The decree is dangerously, and almost certainly deliberately unclear.  What better deterrent in a country where the Supreme Court can seriously uphold the President’s right to conceal information about the deaths of Russian soldiers in Moscow’s undeclared war against Ukraine?