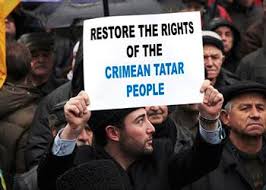 The reduction of Crimean Tatar leader Akhtem Chiygoz’s detention a few days ago has proved, as feared, to not mark any breakthrough and the repression against Crimean Tatars over the so-called ‘Feb 26, 2014 case” continues unabated

Both Chiygoz and Ali Asanov, a father of four, including a baby born in June, have had their terms of detention extended.  The charges are absurd by definition, since they pertain to something that happened before annexation, and therefore under Ukrainian rule and law. This is not only nonsensical, but in breach of the Russian legislation which is supposedly in force while Crimea is under Russian occupation.

It would not be the only grotesque aspect of this case.

Not only are the charges bizarre, but there are also no grounds for holding Chiygoz in custody.  Nariman Dzhelyal, First Deputy Head of the Mejlis explained that the investigator had churned out all the old ‘arguments’.  Chiygoz could supposedly abscond since he is a Ukrainian national; he could continue active political activities (which does not constitute grounds for remanding somebody in custody in either Ukraine or Russia); or could try to influence witnesses or other suspects.

The judge simply went along with this despite the fact that Chiygoz has made it clear on a number of occasions that he will never leave Crimea.  He in fact believes that his continued detention is rather punishment for not wanting to leave.  At a previous hearing he stated:

“I have a family, children and parents here. My father is 78, my mother 74. We did not return to our homeland in order to then wander around foreign lands and I therefore have no wish to abandon my homeland. Maybe it is this that influenced your decision to isolate me. I haven’t just been arrested, I’ve been isolated. For half a year I have been deprived of any possibility of seeing my son and my parents…

… Whether I am destined to live or to die, it will be in my homeland. I want the prosecutor, the Investigative Committee and the judge to know that I have no intention of leaving”.

Another court on Aug 12 remanded Ali Asanov in custody for a further two months, until October.  There are no grounds for this ruling at all, with one of the reasons for holding the father of four in detention is that he denies the charges.

33-year-old Asanov was arrested initially on April 15 and held in a police station in Bakhchysarai where, his family say, they tried to get him to ‘confess’ to causing the death of two people through carelessness, saying that they’d let him go home if he did.

The lawyer whom the Crimean Tatar Rights Committee found was rejected by the Investigative Committee who tried to get Asanov to accept a state lawyer.  In a number of cases in Russian-occupied Crimea and in Russia such state lawyers have effectively worked with the investigators, and tried to pressure detainees into ‘confessing’.

Asanov refused and has continued to deny all charges, which is probably the reason that the investigators have demanded his detention despite the fact that he has four small children and a father in ill health.  He is the only bread-winner meaning that his ongoing detention is crippling for the family.

In a previous hearing the prosecution claimed that they needed “ to check that Ali Asanov is not implicated in other crimes, including of an extremist nature”.

The chilling lawlessness goes on.