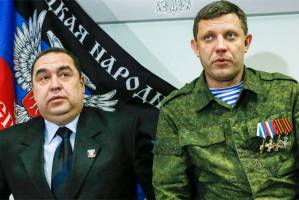 In schools within the territory of the so-called ‘Luhansk people’s republic’ [‘’LPR’], students will study “the history of the war in Donbas and the emergence of the Republic”.  The news came shortly before an aggressive speech by ‘LPR’ leader Igor Plotnitsky in which he promised to ‘return’ what he called ‘its northern territories’ – Luhansk territory under Ukrainian control, by force if necessary

Valentina Tkachenko, so-called minister of education, announced on Friday that her ‘ministry’ had already drawn up the relevant programme.

“The history programme includes the events of the creation and organization of our state, those events which preceded this and what they were caused by. The reasons which prompted the people to defend Donbas, all that is envisaged in the programme”, she explained.

Whether Russian textbooks were provided from the beginning of 2015 is not clear, but the dean of the Moscow State University [MGU] has said that Russian higher education institutes will accept school-leaving documents issued by ‘LPR’ or the so-called ‘Donetsk people’s republic’ [‘DPR’].  There seems no chance that any European institute would recognize these documents.

The reason that any educational qualifications from the ‘republics’ will not be recognized does not lie only in scepticism about these Kremlin-backed entities. There are also serious educational concerns about the programmes being prepared and the assertions made by those in charge of them.

Larisa Polyakova, so-called ‘DPR education minister’ has spoken of the new educational standards they are bringing in “which exclude the foisting of Ukrainian state ideology”.

She claims that “the main thing is that we removed the ideology of Ukrainian nationalism, at times bordering on Nazism.  For example, in the textbooks on Ukrainian History, the Great Patriotic War was renamed the “German-Soviet war”.  She claims that this was to suggest that this was not our – as in Ukrainian – war, and that “our war” was the activities of the Organization of Ukrainian Nationalists and Ukrainian Insurgent Army.  She provides no proof of the latter assertion.

It is worth remembering, that in each city or town falling under the control of the Kremlin-backed militants, one of the first things that the militants did was to cut off Ukrainian media and replace them with Russian pro-Kremlin channels.  There are effectively no independent journalists left in the area under militant control.  A number of journalists left after being held hostage for months. Maria Varfolomeyeva, a 30-year-old Luhansk journalist remained to care for her grandmother who was unwell.  She was seized by militants in early January and is still a hostage. There are other hostages as well.

It is safe to assume that none of this will find mention in the new ‘history curriculum’.

There will be silence about the capture and illegal abduction to Russia of then pilot, now MP Nadiya Savchenko.

There will be a distorted picture of the so-called May 11 ‘referendum’ and ‘elections’ on Nov 2.  It is likely that they will choose not to mention the vegetables and other food provided for a pittance to entice people to attend or the men with Kalashnikovs standing by the ‘ballot booths’.    The course will almost certainly say that the Nov 2 event was ‘observed’ and fully approved by ‘international observers’.  It will not mention that these ‘observers’ were first put up at luxury hotels in Moscow and were all from far-right or Stalinist parties known for their pro-Russian position.

The list of questionable assertions, distortions and omissions can be continued.  School students will unfortunately be unlikely to critically assess a narrative in which the villains are supposedly a ‘Kyiv Junta’ full of anti-Semitic radicals whom the leaders of the ‘republics’ dismissed contemptuously as “pathetic Jews”.  There is not much chance of anything but a conceptual fog from the motley tapestry of Ukrainian pro-Russian activists, Russian neo-Nazis, supporters of the Russian fascist ideologue Alexander Dugin, ‘Orthodox Cossacks’, mercenaries and others who have supposedly been defending Donbas from “fascist Kyiv” since April last year.