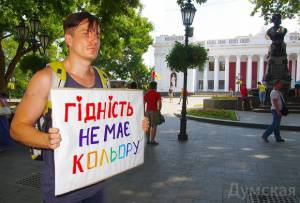 Around 30 individuals hurled fire crackers at the opening of the Odesa Pride 2015 Festival on Saturday afternoon.  The men were masked, but are reported to have been wearing clothes patches saying Ultras Odessa (the name of right-wing and nationalist soccer fans.  They also shouted “Glory to Ukraine” as they flung fire crackers into the building holding around 20 people, including 1 child.  Thankfully nobody was hurt.  The assailants tried to get away, but twelve were caught by the police officers present and taken to a police station.

The Festival organizers told Dumskaya that they consider the attack a stunt, and say that if the assailants had wanted to do real harm, they would have done so.  This may be the case, but it was still undoubtedly dangerous.

Six Festival activists had held individual pickets on Prymorsky Boulevard, each holding a placard, like the one above reading: “Dignity does not have colour”.   They were hassled by one notorious local resident, but there was no trouble.

As reported, the Festival organizers had planned an Equality March on Saturday, but this was challenged after the City Council, with the support of the police, applied to the court to have all events banned.  After a long court hearing into the early hours of Friday morning, only the march was banned.  The authorities had asserted that  disturbances were likely and that they could not guarantee law and order.  More details here: No Lessons Learned: Odesa Court bans LGBT March