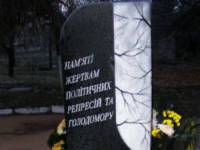 The move was proposed by Valery Skorokhodov who asserted that the Memorial had not been agreed with the territorial community and that its removal was aimed at ‘reinstatement of historical justice.” He proposed adopting “further measures to dismantle monuments and memorial plaques to victims of political repression and Holodomor in Snizhne”.  The audience clearly saw him to be labouring a point they agree with and all members of the self-proclaimed ‘Donetsk people’s republic’ ‘people’s council’ supported the motion through a show of hands.

It seems likely, therefore, that other monuments on territory under Kremlin-backed militant control will also be dismantled.

The fight against the memory of victims of repression began earlier. On May 5 this year, the militants ripped down the memorial plaque on Donetsk National University to Vasyl Stus, the poet, human rights defender and Ukrainian patriot who died in the notorious Perm-36 labour camp in September 1985.  The militants are apparently planning to put up a memorial plaque to the Soviet intelligence agent Nikolai Kuznetsov.

In this battle, as in so much else, the militants are following the line increasingly followed by Moscow under the rule of Vladimir Putin.   This was seen in the aggressive reaction from the pro-Kremlin Izvestia newspaper back in 2009 to an initiative by students and lecturers to have the university named after Vasyl Stus.  The students spoke of Stus as “a poet of great force, a well-known human rights defender, an uncompromising champion of high ideals, a true Hero of Ukraine who gave his life for its future.”  Izvestia claimed he was a little-known “Ukrainian nationalist”.

Under the current Russian regime, the vital museum to the Victims of Political Terror at the Perm-36 camp has been turned into a foul travesty and a museum and monument erected to Joseph Stalin, the dictator responsible for the death of millions.

It is no surprise that the Kremlin-backed militants should be attacking a Memorial to the Victims of Holodomor, the manmade Famine of 1932/33 in Ukraine which has been recognized in Ukraine (and by a number of other countries) as genocide.

Moscow has been consistently antagonistic and effectively denies the very fact of Holodomor, claiming that there was famine throughout the Soviet Union, and that Ukraine and Kuban, an area heavily populated by Ukrainians, were not specifically targeted.

A recent article in the Kremlin-funded Sputnik International publication was entitled ‘Holodomor Hoax: Joseph Stalin’s Crime That Never Took Place’.   This claims that the “roots of the "Holodomor" ("deliberate starvation") myth lie in the longstanding Cold War standoff between Soviet Russia and the West”, and that “Ukrainian nationalists” used academic networks for “disseminating anti-Russian propaganda, creating myths and re-writing history at the same time whitewashing the wartime crimes of OUN-UPA.”  One of these ‘myths’, Sputnik asserts, was that of Holodomor.   It claims that “both Russian and Western historians have questioned the "Holodomor" concept as well as evidently exaggerated number of victims of the famine of 1932-33 in Ukraine.”  It cites one western historian – Mark B. Tauger who apparently asserts that “the disaster was due to environmental circumstances and was evidently not related to the Soviet policy in the region.”, with climactic conditions having played the greatest role.

This was not the view of Robert Conquest, the renowned historian and author of pivotal works on both Holodomor and the Great Terror who died this month, nor is it the view of most historians studying the period.  Those same historians, including many who can in no way be dismissed as “Ukrainian nationalists”, generally dispute the mounting attempts in Putin’s Russia to minimize the crimes of the Soviet period.

Nobody is disputing that millions died in Ukraine of starvation in those terrible years, and indeed in other parts of the USSR, while even Putin’s new ‘positive’ approach to Russian and Soviet history does not deny the fact of political repressions.  Yet Russian officials are currently falling over themselves to obey Putin’s monstrous order to destroy food so desperately needed by tens of millions of Russians, and the Kremlin’s proxies in Donbas are just as zealously demonstrating their loyalty by trying to destroy historical memory.