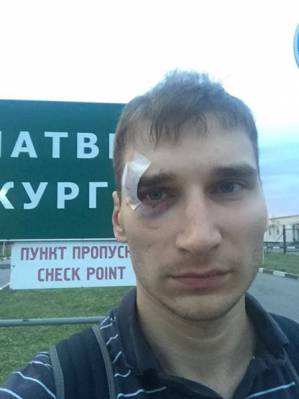 The Investigative Committee has refused to initiate criminal proceedings over the abduction and beating by Kremlin-backed militants of Pavel Kanygin, correspondent in Ukraine for the independent newspaper Novaya Gazeta.

As reported, on June 16, 2015 Kanygin had a gun put to his head and was beaten by militants before being ‘deported’ back to Russia.  The attack on him came the day after he reported the first serious protest against the Kremlin-backed militants’ shelling in Donetsk.  His report was the main source of information about the protest where around 500 residents demanded that the militants stop firing rocket launchers from inside Donetsk and stop using civilians as shields.  Kanygin reported the protest live and honestly, in marked contrast to both the militants’ websites and Russian pro-Kremlin media See:  “Stop using us as shields!”  Donetsk protests against Kremlin-backed militants )  The militants’ treatment of the journalist coincided with the news that he and eight other Russian journalists and human rights activists were challenging Putin’s decree classifying information about military losses in Ukraine.

Novaya’s Chief Editor Dmitry Muratov wrote to the Investigative Committee demanding that a criminal investigation be launched under several articles of Russia’s criminal code, including obstruction of a journalist carrying out his work; physical assault and threats to kill; unlawful deprivation of liberty, and others.

Kanygin had been detained and assaulted in militant-controlled Donetsk, but this should have been no obstacle since Russia’s criminal code allows criminal proceedings over crimes committed outside Russia if the victim is a Russian national.

There were plenty of examples where this provision had been applied, including over incidents involving journalists in Ukraine.

On Jan 31, 2015 the Investigative Committee launched a criminal investigation over what it classified as ‘abduction’ and obstruction of a journalist’s activities.  This was how it viewed the detention on Jan 30 of two Life News journalists Yelizaveta Khramova and Natalya Kalysheva and removal from Ukraine the following day with a 5-year ban on them re-entering Ukraine.  Ukraine’s Security Service [SBU] spokesperson Markian Lubkivsky stated at the time that “the activities of these Russian citizens have nothing in common with journalist work and are views as harming Ukraine’s security and national interests”

On Feb 25 two other Russian journalists – Andrei Grigoriev from NTV and Yelena Makarova from Channel 1 were also stopped by the SBU with this prompting an indignant statement the very next day with the Investigative Committee’s Vladimir Markin claiming this to be obstruction of a journalist’s legitimate activities.   The Investigative Committee also claimed in July that the deportation and 3-year- ban imposed by the SBU on Channel One’s Alexandra Cherepnina fell under several articles of Russia’s criminal code.

Details about the use of Russian channels, including all of the above, in Russia’s undeclared war against Ukraine can be found here.  It is worth noting that the western protests heard initially at SBU attempts to restrict the activities of pro-Kremlin channel employees have largely ceased.  As well as considerable attention given by the western media over the last year to Russia’s propaganda, several countries have initiated programmes aimed at countering the aggressive misinformation and distortion of facts on Russian television.

Novaya Gazeta points out that since the Investigative Committee had launched criminal proceedings in all those cases where the journalists had not been threatened with guns; beaten; handcuffed or accused of drug abuse, the Committee must certainly start such proceedings in the case of Kanygin.

Instead Novaya was informed that the police had carried out a check and decided on June 26 to refuse to initiate criminal proceedings and that the Investigative Committee allegedly could not do anything to change this.

Since the crimes had been reported to the Investigative Committee, mention of the police is complete nonsense, as is the claim that the Committee cannot change anything.

Novaya Gazeta promises to appeal against the decision and also demands an explanation from Markin as to why the Investigative Committee is so clearly distinguishing between those journalists it deems worthy of protection and those that can be beaten and mistreated with impunity.