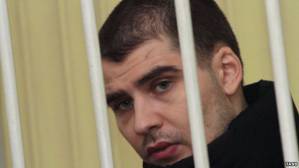 Euromaidan activist Oleksandr Kostenko has been held in detention since Feb 2015 and has been convicted of surreal charges pertaining to an alleged and unprovable offence that Russian-occupied Crimea has no jurisdiction over.  All occupation authorities have refused to investigate the clear evidence that he was subjected to torture.  Contempt of fundamental principles of law appears to be unbounded with over three months having passed since his conviction on May 15, and a hearing on his appeal only now scheduled for Aug 26.

As reported here, there are serious grounds, including a broken arm, to believe Kostenko’s assertion that he was tortured after being arrested.  At a press conference in Kyiv on Aug 18, Kostenko’s lawyer Dmitry Sotnikov spoke also of the torture and ill-treatment his client had been constantly subjected to in the SIZO [remand prison].  Sotnikov explained that the ill-treatment had been at the hands of co-cell-mates, but very likely on the orders of the SIZO head.  The cellmates constantly slapped or lightly hit him on the arm that was broken, so as to not leave traces, but to put psychological pressure on Kostenko.  He was also summoned to the SIZO head who said in the presence of 12 prisoners that they would do what he told them to do to Kostenko unless the latter agreed to cooperate with the prosecution. Sotnikov explains that a complaint was lodged over this and the threats ceased.

Kostenko was charged with having slightly injured a Crimean Berkut officer on Feb 18, 2014 during the EuroMaidan protests in Kyiv.  This was deemed to fall under Article 115 § 2.b  of the Russian Criminal Code (deliberately causing mild damage to health for motives of political, ideological, racial, ethnic or religious hatred or enmity, or for the same motives in relation to a social group).

Sotnikov points out that this could only have carried a sentence of community work since the prosecution had been unable to claim that the Berkut officer had been a Russian law enforcement officer at the time of the alleged deed.  He believes that the second charge was thrown in precisely because of this.  Kostenko was also charged under Article 222 § 1 (unlawfully obtaining, keeping or carrying the main parts of a firearm”).  The investigators claimed to have found a rifle barrel when searching his home.  Kostenko and his lawyer say that the rifle barrel was planted, and certainly none of the safeguards against evidence being planted were applied.

Sotnikov believes that Fyodor Kostenko, Oleksandr’s father, is a vital source of information about the case against the Maidan activist, making his disappearance particularly worrying.  As reported, Kostenko Senior has not been since since March when he went to a press conference in Kyiv about his son’s arrest.  He is known to have crossed back into Crimea and then all trace of him vanishes.

Sotnikov explains that the main part of the sentence – 4 years imprisonment – was under the article of the criminal code on ‘possession of parts of a weapon’.  He says that not one of the official witnesses of the search has confirmed that weapons were found in Kostenko’s flat.  The officers claim that Kostenko Senior immediately identified the gun barrel as belonging to his son, but there is no record of this.

Kostenko Senior also supposedly gave permission for the search, with such permission being needed in the absence of a court order.  How the permission was obtained is not clear since the witnesses arrived after it had (allegedly) been given.

It has now been almost 6 months since Fyodor Kostenko was last seen.  There was no reason for him to disappear voluntarily and there are clearly grounds for concern, exacerbated by the amount of information information he could reveal about the case.

The political motivation behind the trial was seen also in the inclusion, at the insistence of the prosecutor, of a video clip by Anatoly Shariy, a journalist of well-deserved notoriety.  In it, Shariy claims to have a recording of a conversation between Kostenko and a former MP from the far-right VO Svoboda party, during which Kostenko is alleged to have told the other person that “one Berkut officer has already broken”, and they “need another half hour working on “a second officer.  In the background, you can hear groans and the apparent sounds of blows.

Like with the show trial of Oleg Sentsov and three other opponents of Russia’s annexation of Crimea, the aim seems to have been to discredit certain organizations and try to exaggerate their role in Euromaidan and subsequent events.  The assumption was almost certainly that confessions tortured out of people held incommunicado would override any questions over the absurd irrelevance of supposedly incriminating material.

No amount of extraneous ‘evidence’ of such questionable nature could hide the fundamental flaws in this profoundly cynical reprisal against a Maidan activist and chilling warning to others of what they can expect in Russian-occupied Crimea.