Famous accordion-player sentenced to 13 yearsFamous accordion-player Ihor Zavadsky still in SIZOFamous accordion-player remanded for another monthIhor Zavadsky remains in custody despite health concerns and doubts about the caseSelective criminal investigation initiated over “Lukyanivka. Prison No. 1 programmeDetention Unit film and its possible ramificationsShocking statistics in Ukrainian penal institutionsDeath of Dnipropetrovsk remand prisoner to be reinvestigatedKyiv court quashes famous accordionist’s rigged sentence yet refuses to release himIhor Zavadsky as a mirror of the Ukrainian justice systemUkrainian musician finally freed after 4 years imprisonment on rigged chargesOn attempts to destroy accordionist Igor Zavadsky, or four years in prison on false chargesOne of the people in the journalist programme “Lukyanivka. Prison No. 1 beaten up
• Topics / The right to a fair trial 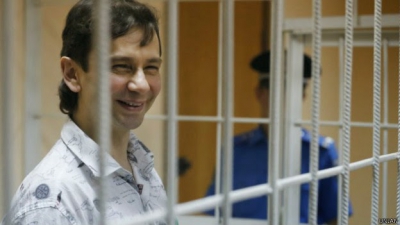 Human rights activists, musicians and former students have come out in support of well-known accordion-player Ihor Zavadsky and his agent Andriy Bryhida on the eve of the appeal against their conviction and long prison sentences.  They believe that both men were tortured, have been unlawfully held in detention since Feb 23, 2012, and were wrongfully convicted.  They present evidence of grave irregularities in the case and indication that the charges were fabricated and the records of court hearings falsified.

As reported, concern has been expressed over this case from the outset.  In July 2014, after over two years in detention, Zavadsky was convicted of sexual crimes against minors and sentenced to 13 years imprisonment.  The specific charges were of “‘violently satisfying sexual passions in an unnatural fashion’ (Article 153); sexual debauchery (Article 156) and acting as a sexual go-between (Article 302).  On the same charges his agent received a 7-year sentence and driver – 3 years.

The investigators claimed that Zavadsky had been under surveillance for over a year with a hidden camera placed in his flat.  With the investigators alleging sexual abuse of minors, the period of surveillance seemed suspiciously long.  The TV channel TVi presented a documentary suggesting that Zavadsky had been set up by a rival, and concerns were strong about the case, with this hardly allayed by the fact that the men were tried behind closed doors.

There was public support for the men and an attempt was even made to provide Zavadsky with a mute accordion to enable him to keep practising.  The refusal by the remand prison administration to allow this is additionally condemned as a form of psychological torture.

Yevhen Zakharov, Director of the Kharkiv Human Rights Group, musicians Denis Snihiryov and Ruslan Sheremet, together with the men’s lawyers and Zavadsky’s students expressed their concerns at a press conference on Aug 19, 2015.

They believe that the case was initiated by the Shevchenkivsky District Police in Kyiv without any legitimate grounds, and that it is totally fabricated. “The investigative activities were carried out without authority and with unlawful decisions to carry out searches.  The change of jurisdiction was also made unlawfully, without the involvement of the prosecutor’s office”. There were countless other infringements of procedural law, including the use of so-called witnesses of searches who were in fact investigative officers.  There were also protocols supposedly providing the minutes of court hearings, but in fact aimed at creating the impression that the court had reached a just verdict.  The defence issued 266 comments on those protocols, with the Podilsky Court accepting 197 of them, thus effectively acknowledging that there had been falsification.

The court’s conclusions, the press were told, do not correspond with the actual circumstances of the case, particularly as concerns the minors who were recognized as victims in the case. There was no assessment of whether their testimony was permissible, and where certain evidence was found to have been inadmissible, the court still cited it in its verdict.

The motivation part of the verdict was thrown together in chaotic fashion, without specific charges being laid out.  The court simply recited the article of the criminal code without pointing to actual indications of the criminal behaviour falling under those articles.

The Court of Appeal is due to review the sentence on Aug 20, and hope was expressed that it would thoroughly and objectively study the circumstances of the case and revoke the guilty verdicts.  The defence believes that the case should be terminated for want of any attempts to have assessed the adequacy of the testimony used in the case, and the impossibility of doing this now.