‘Russian world’ propagandist gets jail sentence in Ukraine after Russia deports her "like a dirty used rag"A brief description of the KHPG strategic litigations in the first half of 2021Russia lodges a surreal ECHR inter-state claim against Ukraine over MH17, water for occupied Crimea & "discrimination"Ukrainian hostage tortured at Donetsk secret prison urgently needs an operationFrustrating sentence over savage torture and killing of Maidan activist Yury Verbytsky Former Kremlin hostages put release of all Ukrainian political prisoners on the agenda The practice of application of Article 111 of the Criminal Code of UkraineUkrainian soldier Vitaly Markiv acquitted and freed in Italy!Viktor Lozinsky, the ex-MP convicted of murder, wins in local elections in UkraineInternational human rights defenders find critical failings in Italy’s trial & 24-year sentence of Ukrainian soldier MarkivAppeal begins in Italy against shocking 24-year sentence of Ukrainian soldier Vitaly MarkivUkrainian hostages not forgotten but Russia understands only the language of ransoms and sanctionsVital evidence proves that Ukrainian soldier Markiv had nothing to do with Italian journalist’s deathWhy expel Russians ‘planning crimes for the Kremlin’ when Russia holds so many Ukrainian political prisoners?Russia uses torture by Donbas militants to fabricate a new Ukrainian ‘spying trial’Ex-Kremlin hostage Sentsov calls out Zelensky over flagrant violations in Sheremet caseCrucial tests in Donbas should overturn Italy’s 24-year sentence against Ukrainian soldier MarkivWhat judicial reform in Ukraine? Notorious Poltava judge gets lavish golden handshake instead of dismissalA brief description of KHPG strategic litigations in July–December 2019Markiv Trial: Film finds witnesses, Russian propaganda & answers to vital questions the Italian prosecutor didn’t ask
• Topics / News from the CIS countries 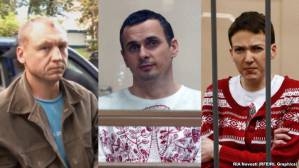 One is a police officer; one is a filmmaker; and one is a pilot.

Three people illegally abducted from their homelands and unjustly incarcerated by a rogue foreign power -- their lives uprooted and disrupted, their futures in doubt.

Meet Vladimir Putin’s hostages, two men and a woman who have become victims of the Kremlin leader’s jihad against international rules, norms, and law.

Putin has done many shocking and disturbing things in the past couple of years.

He’s the first leader to forcibly annex another country’s territory in Europe since Adolf Hitler. He started a completely manufactured war in eastern Ukraine that has killed thousands. He’s plunged Russia into an absurd spiral of xenophobia, intolerance, and repression. He’s engaged in a dangerous game of brinksmanship with the West.

And he’s also become a kidnapper -- the functional equivalent of an international crime boss.

Moscow claims Eston Kohver is an Estonian spy and that he was caught conducting espionage on Russian territory. He isn’t and he wasn’t. The only thing he is guilty of is doing his job well and being a convenient target.

Kohver is an officer of Estonia’s Internal Security Service, or KaPo, that country’s equivalent of the FBI.

At the time he was abducted, he was investigating a smuggling ring run by Russian organized crime groups in Estonia. On the morning of September 5, 2014, Kohver was on his way to meet a confidential informant in a secluded forest near the Estonian village of Miikse, just a few kilometers from the border with Russia.

It was a ruse. It was nothing but a set-up. On his way to the meeting, Kohver was ambushed with stun grenades, abducted at gunpoint, and taken into Russia.

Estonian and Russian border guards inspected the area where Kohver disappeared on the day of the incident. A bilingual joint protocol clearly states, based on analysis of footprints in the area, that a group of people entered Estonia from Russia and then returned there. It also noted impact craters from stun grenades.

After a widely criticized show-trial, a court in Russia’s Pskov region todaysentenced Kohver to 15 years in prison for espionage.

Russia claims Oleh Sentsov is a terrorist. He isn’t. The only thing Sentsov is guilty of is bravery -- of being willing to openly oppose Moscow’s illegal annexation of his homeland.

Sentsov is an up-and-coming Ukrainian director best known for his acclaimed film Gaamer, which debuted at the 2012 Rotterdam Film Festival. He is also the single father of two children.

A native of Crimea, Sentsov was a strong supporter of Ukraine’s pro-Western Euromaidan uprising. He was also a fierce opponent of Russia’s annexation of Crimea, and helped deliver food supplies to Ukrainian servicemen trapped on their bases on the peninsula.

Sentsov was seized off the street by Russian security agents in Simferopol on May 11, 2014, shortly after he had attended a demonstration against the annexation.

He surfaced in custody in Moscow days later and was charged with setting fires in the offices of the United Russia party and the Russian Community of Crimea. He was also charged with plotting to blow up Simferopol’s Lenin monument and its eternal flame.

Prosecutors have shown scant evidence to support the charges against Sentsov and a key witness -- Hennady Afanasyev -- retracted his testimony incriminating the director in open court, claiming it was given under duress.

Sentsov’s show-trial in the southern Russian city of Rostov-On-Don wrapped up today with prosecutors calling for a 23-year sentence.

"I am not going to ask for anything from you, " Sentsov said in a defiant closing statement. "Everyone understands that a court of occupiers by definition cannot be just. Don’t take it personally, your honor."

Of Putin’s three international hostages, Nadia Savchenko is the most famous.

Moscow says Savchenko is a murderer. She isn’t. The only thing she is guilty of is risking her life for her country’s independence.

Ukraine’s first female military pilot, Savchenko was a volunteer fighting Moscow-backed separatists in Donbas. She was on a mission to rescue Ukrainian soldiers when she was captured by separatists near the village of Metalist in Luhansk Oblast sometime in mid-June 2014.

On June 19, separatists posted a video of her being interrogated while handcuffed to a metal pipe.

She surfaced in custody weeks later in Russia and was charged with being complicit in the deaths of two Russian journalists, who were killed in a mortar attack, and then illegally crossing the border into Russia.

Savchenko’s lawyers say her mobile phone records and video evidence prove that she was already in captivity when the journalists were killed. She faces 25 years in prison if convicted.

Other than being victims of Putin’s kidnapping spree, Kohver, Sentsov, and Savchenko have something else in common.

They were all born in the Soviet Union and they all became loyal, successful, and productive citizens of their newly independent countries.

And for Putin, who considers the break-up of the U.S.S.R. to be a tragedy, this is enough of a crime to make them fair game.

But for the rest of us, they must be considered hostages who were illegally abducted by an increasingly dangerous rogue state.