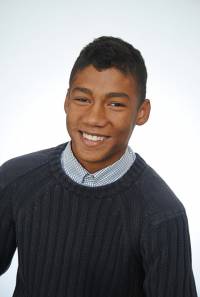 A foul racially-motivated attack has been reported against a 16-year-old young man in Kyiv.  Galina Uzu writes that her son David was attacked in the early evening on Aug 19 after a group of over 40 young people got into the metro carriage that he was travelling in.

David has told his mother that they behaved in a confrontational manner and also shouted out neo-Nazi-style comments.

One of them turned to David, saying: “Monkey, will you have a banana?” and began threatening him with physical violence.   David got out at the Poznyaki station, and was promptly followed onto the platform and surrounded by around 10 thugs from the group.  They tried to provoke a fight, taking turns to push him and hitting him in different parts of the body.  David understood that it would only make the situation worse if he fought back, and tried to simply avoid the blows.

His mother writes that there was no duty police officer in sight and passers-by did not at first react.  It was only when David was punched hard in the jaw that a passenger intervened, trying to get the assailants off him.   This worked and the thugs fled.

David remembers his attackers and believes he would recognize them.  He describes the main person trying to pick a fight as being skinny, blonde and with a trident (Ukrainian symbol) tattooed on the right side of his neck.

David tried to seek help from the police unit at the station, but yet again the duty officer was not to be found.

After making his own way home, he called the police and a patrol car took him and his mother to the Darnytsa Police Station where he reported the attack.

Galina Uzu notes that they were asked why he hadn’t sought help from the metro police (!) and said that the case would in any case be sent to them.  They in turn returned to the Poznyaki Station where the police officer was still in hiding.  Staff at the station even called him over the loudhailer system, but he was still in no hurry.  Galina Uzu says that when he failed to respond even to the emergency signal, she began shouting: “Police, help, they’re killing me!”.  She asserts that even then, he didn’t try to hurry.  She says that when she asked to see his ID, he opened it in front of the CCTV camera and then promptly put it away.  She managed only to see that his last name was Yakovets.

He claimed that he had not seen any attack that evening and that none had taken place.  Galina Uzu is asking for witnesses of the incident to come forward.

Any report must clearly be verified, however it is difficult to imagine why a young man about to begin university would make something like this up.  It is much easier to guess why a duty officer so consistently not there when needed might wish to deny that any incident had taken place.

Ukraine’s Interior Ministry is notoriously reluctant to find a racist motive in crimes  Immediately following the attack on a student area of Kharkiv on June 11, the police began stressing that there were a couple of ethnic Ukrainian victims of the assailants to underplay any suggestion of a racist motive.   This was the reason given two weeks later for dismissing any racial motivation.  Perhaps this is correct, however it is clear that many held a different view and foreign students held a protest calling for measures to ensure their safety.

Failure to prosecute those guilty of racially-motivated attacks is also, unfortunately, compounded by the fact that very many victims do not wish to make formal complaints, whether for fear of reprisals, whether out of lack of any trust in the police.  In this case a complaint has been lodged, and a proper investigation from the Kyiv police is eagerly awaited.