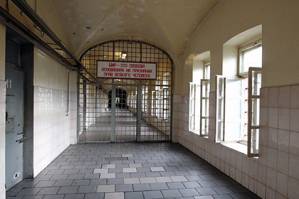 Russia has reinstated yet another Soviet tradition with the death of a prisoner on hunger strike.  Sergei Kaziyev died on Aug 21, 2015 in the Nalchik SIZO, or pre-trial detention unit after three months on hunger strike  He was 40 years on, and leaves a mother, sister and daughter.

Kaziyev had been sentenced to 14 and a half years prison colony and was demanding only that he be finally sent to the prison.  He could then have applied, as was his right, to be released on health grounds.  Instead he was kept at the SIZO and, effectively, allowed to die because the appeal had not yet been heard by the Supreme Court.

Kaziyev and 56 other men were sentenced on Dec 23, 2014 on charges relating to the attacks in Oct 2005 on police and security facilities in Nalchik (Kabardino-Balkaria Republic of the Russian Federation).    The attacks had been carried out by largely inexperienced Muslims in retaliation for the systematic abduction of young men by the Russian federal forces.  Such abductions had become notorious throughout the Northern Caucuses and have resulted in numerous cases where the European Court of Human Rights has found Russia in violation of the European Convention, and especially the right to life.  The attacks were a disaster with 95 of the assailants killed (officially during the battle, according to lawyers and human rights activists, about half after being captured and in cold blood), as well as 35 federal forces and 14 civilians.

There were very serious concerns over the case which effectively lasted 9 years, with the trial itself going on for four and a half.  Despite the large number of defendants and range of charges, not one person was found guilty of direct killings, yet all defendants were convicted, some receiving life sentences.  According to well-known journalist Orkhan Dzhemal:   “In other words, there was a revolt with a battle lasting for 24 hours, yet none of the defendants was responsible for the deaths.  It would seem that there was more political content in the trial, than criminal”.

Some of the attackers who were killed had obviously been beaten first.  At least two are reported to have had bullet wounds indicating an execution-style killing.  Many of the defendants convicted had alibis, and others admitted to having agreed to take part, but said that they had fled without firing a single shot.  The reports indicate that the case against the men were largely based on testimony almost certainly obtained under torture.

Kaziyev had initially been in detention but this was changed to house arrest because of the grave deterioration in his health in the SIZO where the conditions are appalling. He was taken back into custody following the court verdict on Dec 21, despite the fact that the ruling had not come into force.  In the three months of his hunger strike he lost half his weight.   The SIZO administration claimed as late as Aug 4 that he was in a satisfactory state of health.  This was just over two weeks before he died.

He was charged with attacking a police station and a shop.  It is reported that he didn’t know the people accused of that crime and nobody had recognized him as one of the attackers.

He became gravely ill during his detention, with liver cirrhosis and diabetes, and would faint during court hearings.  In 2009, 40 of the defendants went on hunger strike demanding that Kaziyev be taken to a civil hospital, and saying that his continued detention was like medical execution.  The demand then was heeded, not this time.

The last death from hunger strike was in Soviet times, that of Soviet dissident Anatoly Marchenko in 1986.  Many other political prisoners died of medical conditions either caused, or exacerbated by the harsh labour camp conditions, including Ukrainians Vasyl Stus, Valery Marchenko and Yury Lytvyn.

The longest hunger strike was veteran Crimean Tatar leader Mustafa Dzhemiliev’s 303 days in 1974. In Feb 2015, Mustafa Dzhemiliev, now a Ukrainian MP whom Russia as occupier has banned from his native Crimea, wrote an immensely moving appeal to Nadiya Savchenko, whom Russia has been holding hostage since June 2014.  She had, at that stage, been on hunger strike for 74 days. Please see:

Mustafa Dzhemiliev: Nadya, daughter, stop your hunger strike. We will save you

Nadiya Savchenko continued then but, thankfully, decided finally to stop her hunger strike and continue her struggle in other ways.  The death of Sergei Kaziyev indicates that Mustafa Dzhemiliev was quite right – Russia is not a country from whom you should expect humane principles.