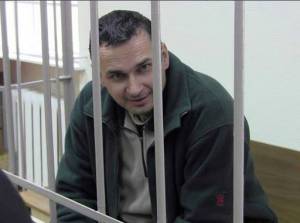 A number of Russian filmmakers have spoken out over the trial of their Ukrainian colleague Oleg Sentsov who is facing a sentence of up to 23 years charged with non-existent ‘terrorism’.  The filmmakers include Andrey Zvyagintsev, author of Leviathan, winner of the Golden Globe for best foreign language film in 2014, but some important directors are noticeable for their absence, namely Nikita Mikhalkov and his brother Andrei Konchalovsky.

Andrey Zvyagintsev published his personal appeal in Novaya Gazeta.  He calls it “monstrous to pass a 23-year sentence on a still young and talented filmmaker and father of small children, and to do this on the basis of the testimony of two witnesses, one of whom has already retracted his testimony and the other refused to give it in court. “

He speaks of the gloomy thoughts this case arouses and notes that Russians like western cars, clothes and architecture.  “Here we all understand everything about quality. Yet quality in the trial of a person somehow doesn’t enter our head.”

“I understand very well that if Sentsov had been a Russian and spoke out for Russia’s territorial integrity, he would have the status of a hero, the status of “one of us”.  Yes, Sentsov is not “one of us”, not “our man”, and he states that openly.  And that is his right. It’s another question what we do with those who are “not our people”.

Zvyagintsev’s position is not uncontroversial.  He calls on “the strong” to be merciful, and ends with a pathos-filled rhetorical question about the “magnanimity of the conqueror” remaining a child’s dream.

Pavel Bardin; Alexei Fedorchenko; Alexei German Junior; Vladimir Kott; Askold Kurov;  Vladimir Mirzoyev and Alexander Sokurov all made statements in Snob.ru.  Some have been actively speaking out on Sentsov’s behalf, with Kurov making a film about him, and Bardin one of many video addresses recorded by European filmmakers calling for Sentsov’s release.  Others have unfortunately been silent until now.

Russia’s Cinema Union has written an appeal to the head of the Presidential Human Rights Committee Mikhail Fedotov.  The signatories point to the obvious discrepancy between the actions Sentsov is accused of and the sentence demanded by the prosecutor (23 years).  In fact, however, they ask only that the committee does all in its power to “guarantee his right to an objective and lawful investigation and trial”.  With the verdict, which is widely believed to be predetermined, due on Aug 25, the letter seems over a year out of date.  It does however add one vital request, that being an investigation into the allegations of torture made by both Sentsov and Gennady Afanasyev (and, in fact, civic activist Oleksandr Kolchenko, who is on trial with Sentsov).

As reported here, there was some degree of secrecy about the case, and it is understandable that the authoritative Memorial Human Rights Centre should have waited until all evidence had been presented, and until Afanasyev retracted his testimony, to declare Sentsov and Kolchenko political prisoners.

They have since recognized Afanasyev as a political prisoner as well, and called on human rights groups to stress the need to ensure his safety.

The European Film Academy recently issued a second appeal, the first having been shortly after Sentsov’s arrest.  That also contains the formidable list of members of both the Polish and Czech Film Academies who have spoken out on Sentsov’s behalf  (see also:Polish Film Academy Demand Release of Oleg Sentsov,   Berlin Arts Academy demand Russia releases Oleg Sentsov).

The arrest of four opponents of Russia’s invasion and annexation of Crimea and their trial on supposed ‘terrorism charges’ bore all the hallmarks of a show trial from the outset, one in which Sentsov and Kolchenko were obviously out of place.  It is good that more Russian filmmakers have now raised their voice, but it is baffling what took them so long.

Details on how to write to Oleg Sentsov, Oleksandr Kolchenko and Gennady Afanasyev here.   Any message of support will surely be appreciated.