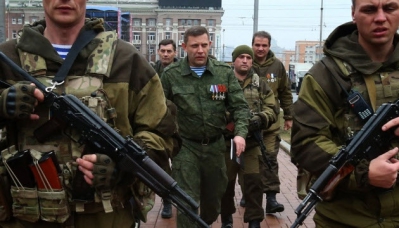 Russian journalist Pavel Kanygin calls them “Donbosses” – the Kremlin-backed militant leaders of the so-called ‘Donetsk people’s republic’ whose leadership of “terrorists” (his word) armed and funded from Moscow has enabled them to amass millions.

The Novaya Gazeta correspondent focuses on the contacts and ‘business interests’ of four key figures who effectively control all businesses in the militant-occupied Donetsk oblast.  All have received attention here, and the following in places supplements Kanygin’s information.  The four are: Alexander Zakharchenko, current leader of the ‘DPR’;  Alexander Khodakovsky, who calls himself the head of the ‘DPR security council’; Denis Pushilin, ‘deputy prime minister and one of the so-called negotiators in Minsk and Igor Girkin [nom de guerre: Strelkov] – the former ‘DPR defence minister’ and commander of the ‘Novorossiya army’.

It is no accident that information about the militants should be coming from a Russian source.  It is not possible for Ukrainian journalists to write openly and critically about the events in Donbas, and most are now in exile.  A number were first held hostage, some tortured, for many months, and 30-year-old journalist Maria Varfolomeyeva, who was taken prisoner in January this year, remains a hostage.  Kanygin was one of the few independent Russian journalists in Donbas, but was ‘deported’ after being seized by militants, beaten and having a gun put to his head on June 16.  The day before Kanygin had reported the first serious protest against the Kremlin-backed militants’ shelling in Donetsk (See:  “Stop using us as shields!”  Donetsk protests against Kremlin-backed militants.)

Alexander Zakharchenko has been ‘DPR’ leader since Aug 2014 when he replaced Russian right-wing nationalist Alexander Borodai.  It was widely considered at the time that the Kremlin was trying to create the semblance of a home-grown rebel movement by replacing Russians like Borodai and Girkin with Ukrainian nationals. No serious analyst would suggest for a moment that people like Zakharchenko or his counterpart in the Luhansk oblast Igor Plotnitsky take any political decision without consulting the Kremlin.

Evidence of Zakharchenko’s sumptuous lifestyle has already been reported.  His personal wealth has been obtained at a time when hundreds of thousands of Donbas people have been forced to leave their homes, and those who remain in areas under militant control are suffering serious poverty.  Kanygin points out that the economy of the region is three times smaller than it was before the fighting began.

One of the problems was that Ukrainian and foreign business left the area, with their property being grabbed by those with arms and therefore power.  The few business owners who did stay now have to pay ‘protection’ money to those who have arms and heavy artillery.  Criminal bosses, Kanygin points out, are those who have the most ‘bayonets’ on their side.

For the moment, this is Zakharchenko who has 4-5 thousand fighters in his camp, many from the pro-Russian ‘Oplot’.  Kanygin believes that Zakharchenko wields control over most of the liquid assets in Donetsk and the surrounding cities, with his fighters controlling supermarkets, restaurants, etc., as well as those enterprises that remain working.  Kanygin spoke with a representative of the Ukrainian chain of shops ATB. Speaking from Dnipropetrovsk, she confirmed that ATB shops had simply been taken over, with Zakharchenko’s wife Natalya in control of them.  Zakharchenko’s family is now also controlling the Amstor chain of stores. Zakharchenko also has his grasp on the sale of oil and related goods.  Kanygin’s request to speak with Zakharchenko has not been taken up.

Kanygin has been told by big Ukrainian wholesalers that Zakharchenko’s people also ensure that food items are delivered from government-controlled Ukraine.  Unfortunately, his research suggests that Ukrainian armed units are also taking part in ‘protection’ for the flow of goods.

Kanygin spoke with a source “close to the President’s Administration” (he presumably means Vladimir Putin’s administration) who suggested that the Kremlin knows what these individuals like Zakharchenko are about.  It is not concerned, however, about internal squabbles and how they divide up the goodies.  If the Kremlin wants to put them in their place, it will do so instantly, and they should all remember that, the unnamed source says.

The constant rumours that Zakharchenko has been, or is about to be, ousted have thus far come to nothing.  The rumours become most rife when Vladislav Surkov, Putin’s aide appears in Donbas, which he is reported to have done at least twice in recent months.  One of the indicators of a power struggle has been the increase in anti-Semitic rhetoric, targeting Alexander Khodakovsky.

Khodakovsky has less ‘bayonets’, but still controls 1-2 thousand fighters from the Vostok brigade.  The ex-head of a Donetsk SBU [Ukrainian Security Service] Alpha special force unit has also, according to Kanygin, retained many of his old close ties with the Donetsk elite which raises his influence.

Surely most importantly, he is widely seen as Zakharchenko’s replacement, and judging from Kanygin’s report, this is how he is viewed by Moscow.  Whether or not with grooming from Moscow, Khodakovsky publically supports Donbas’ reintegration into Ukraine, but with close contacts with Russia.  He says that he does not support joining the Russian Federation, but insists on special status for the area.

This, it should be noted, is increasingly the line taken in Moscow.

Khodakovsky also presents himself as the potential leader, able to reach agreement with everybody.  According to Kanygin, he is supported by Rinat Akhmetov, Ukraine’s richest oligarch and former close ally of Viktor Yanukovych.

Denis Pushilin does not have his own fighters, nor influential patrons, yet he remains in a prominent position and takes part in the Minsk negotiations.

Kanygin’s sources in Moscow and Kyiv assert that from early in 2014 Pushilin received tens of millions of roubles for organizing protests, buying food, transport and equipment.  Huge amounts were spent, for example, on the so-called ‘May referendum”.  The coordinators of the ‘Novorossiya project’ say that most of this money was simply stolen.

15 million for his services?

Kanygin adds one other person to his list of influential people.  Igor Girkin who was identified by US officials as working for Russia’s GRU military intelligence service.  Girkin played a major role in Russia’s invasion of Crimea, and was one of the first people on the US sanction list.  He then moved to eastern Donbas and played an equally active role in seizing control there.  The evidence found after his forces abandoned Sloviansk demonstrate that he personally signed execution orders.  During the period when the city was under ‘DPR’ control, abductions, hostage-taking, torture and extra-judicial executions and murders became an everyday occurrence.

Kanygin notes that “the Kremlin removed Girkin from its list of war managers a year ago.” After returning to Russia, Girkin created a civic movement called ‘Novorossiya’ and collected lots of money, including through tours around Russia, accompanied by PR consultants and ideological comrades.  This was supposedly a volunteer movement and fund that was independent from the Kremlin.

Kanygin’s source for some of his allegations is Vera Girkina, whom he refers to as Girkin’s former wife.  She claims that Girkin “made a fortune on this war and the ‘Novorossiya movement’ is his project”.  He was paid generously, including for Sloviansk, she says, and asserts that the amount of money may have been as much as 15 million roubles

Girkin’s press-secretary Anastasia Mikhailovskaya called the report delirious nonsense, and then said: “You were beaten up in Donetsk, after all, and you know how many unhinged militants are wandering around Moscow at the moment?”

Menacingly clear and from Girkin’s camp worth taking seriously.  He, and those who have made use of his murderous services over the last 18 months should know.