If the Crimean occupiers can’t get you, they’ll go for your elderly mother 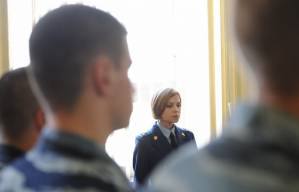 Natalya Poklonskaya, installed as prosecutor by the occupation regime and actively involved in a number of politically motivated prosecutions  Photo: TASS

There is every indication that the authorities in Russian-occupied Crimea were hoping to subject Stanislav Krasnov, commander of the Krym Volunteer Battalion, to the same politically-motivated trial and sentence as his friend and fellow Maidan activist Oleksandr Kostenko.  Since he is far away, defending Ukraine in Donbas, they are increasingly harassing his elderly mother.

The latest of three searches was carried out on Tuesday morning when around 12 officers appeared at the home of 69-year-old Nadezhda Krasnova.  Lawyer Dmitry Sotnikov reports that they brought the ‘witnesses’ with them – a clear breach of the law, as was the failure to give her a copy of the search protocol.

Unsurprisingly, they found nothing, and simply wrote out telephone numbers.  It is likely that the aim of the search was simply to intimidate Krasnov’s mother, and they certainly left her in a state of stress.

Just over a week ago, on Aug 22, an ‘investigator’ organized a full-blown interrogation of Nadezhda Krasnova in which they asked her, among other things, when her son “had become a fascist”.   The investigator - A.S. Lukyanchuk - nabbed Krasnov’s mother, Nadezhda Alexandrovna as she was leaving a shop and made her get into his car, threatening that the riot police would be sent if she didn’t come ‘voluntarily’.  Lukyanchuk did not, of course, inform the elderly woman that she is entitled to refuse to testify in her son’s case.  Instead  he asked her “when her son had become a fascist; whether he kept any weapons at home, and why he had gone to Maidan.  Did he plan further terrorist activities?”   He apparently put questions of a personal nature as well, like who is Krasnov’s father and who is his girlfriend.  Understandably, Nadezhda Alexandrovna seems to have only answered the question about weapons, saying that there are no weapons in the flat.  The interrogation ended with the ‘investigator’ claiming that Stanislav Krasnov had spent the last 6 months killing people in Donbas, but that he would be caught sooner or later and taken to Russia to stand trial “for these killings”.

Krasnov himself is fighting the Kremlin-backed militants in Donbas, but would in any case not return to Crimea where he is facing criminal proceedings for what the occupation regime prosecutor deems ‘incitement to enmity’.  As mentioned, Krasnov is a good friend of Oleksandr Kolchenko, the Maidan activist sentenced to 4 years and 2 months over charges pertaining to an alleged incident in Kyiv before Russia forcibly annexed Crimea.

Sotnikov points out that in the trial of Oleksandr Kostenko,   Natalya Poklonskaya, installed as prosecutor by the occupation authorities, claimed that Kostenko and Krasnov had tortured ‘Berkut’ officers and burned their bodies in a crematorium established in the basement of the Kyiv City Administration (occupied at that time by some Euromaidan activists).  No proof was ever provided.

On June 11, 2015, Russia’s Investigative Committee initiated criminal proceedings against Krasnov who is accused of inciting enmity or hatred towards people of a certain social group, with the use of the media (article 282 § 1 of the Russian criminal code).

Shortly prior to that, on May 29, Poklonskaya announced that criminal proceedings had been brought against Stanislav Krasnov whom she called a member of the “punitive Azov Battalion”.  This coincided with other disturbing signs that the occupation regime was seeking to demonize the Azov Battalion, but could not change the fact that Krasnov is in the Krym, or Crimea Battalion .

Poklonskaya also claimed that the case was based on testimony ‘given’ by Kostenko.  The latter has consistently complained of torture, yet despite all evidence, including a broken arm received after being arrested, corroborating his claims, the prosecutor’s office has refused to initiate a criminal investigation.

The latter was recently sentenced by a Crimean court to 4 years imprisonment over an alleged and unproven injury to a Berkut officer in Kyiv before Russia invaded and annexed Crimea.  Poklonskaya’s claim that Kostenko ‘confessed’ and gave testimony against Krasnov is almost certainly false.

The Crimean Human Rights Field Mission points out that, like the case against Kostenko, these proceedings are over an alleged event in mainland Ukraine.  In contrast to the charges against Kostenko, the accusation against Krasnov relates to alleged action since annexation.  He is supposed to have made public statements on two TV channels from April 2014 to Jan 2015  which incited enmity towards former Ukrainian citizens who had expressed the wish to take on Russian citizenship.

The charges are absurd, and like the criminal prosecution and real sentence passed on Oleksandr Kostenko, seem aimed at intimidating Crimeans and forcing opponents of Russian annexation to leave Crimea, or to stay away.