Jailed in Russian-occupied Crimea for a Ukrainian flag 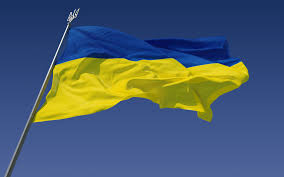 A young man has been jailed for 15 days for supposed breach of the peace early in the morning on Ukraine’s Independence Day when he and another young man and woman were only trying to photograph themselves with a Ukrainian flag on Mount Mitridat in the centre of Kerch.

The mother of one of the three told the Crimean Human Rights Field Mission that the two young men and a young woman had set out at 7 a.m. on Aug 24 to take photos.  It was this ‘seditious act’ that they were engaged in, together with an unfurled flag, when the police turned up and detained all three of them, supposedly for using bad language.

The young people say that they were told at the police station that they’d been detained because of the Ukrainian flag and a T-shirt with the Ukrainian trident and a pro-Ukrainian message.

A court that afternoon heard charges of obstructing public order against the two young men.  One of the guys was jailed for 15 days, the other fined 1 thousand roubles.  The young woman’s hearing was postponed until Aug 25 since one of the so-called witnesses, after being warned of liability for giving false testimony, decided that she had seen nothing after all.

Judging by the court ruling, an individual was found to act as ‘witness’ and claim that she had heard the young men shouting various slogans.  She does not appear to have mentioned foul language, so that presumably was ‘heard’ by the police only.

If the young man has indeed been jailed, then this is the most repressive move thus far by the Russian occupation authorities for waving a Ukrainian flag and wearing Ukrainian symbols.

While it cannot be proven that three young people did not set out at 7 a.m. on Independence Day to offend people with foul language, it defies credibility to believe that they did.  It is made especially unlikely by other incidents.

As reported, the Head of the Ukrainian Cultural Centre Leonid Kuzmin and another member of the Centre Maxim Kuzmin (unrelated) were detained and taken to a police station after separately laying flowers at the monument to the Ukrainian poet Taras Shevchenko on Aug 24.

Another member of the Centre Veldar Shukurdzhiyev had earlier received a prosecutor’s warning which contained the following:

“Some radical Crimean Tatar and Ukrainian activists are planning to provoke the Crimean law enforcement bodies to use force by placing Ukrainian symbols in inhabited areas of Crimea and chanting pro-Ukrainian slogans”.

Over the last 6 months, Ukrainians holding Ukrainian flags have been sentenced to community work, interrogated by the so-called counter-extremism police and in numerous other ways harassed.

More details here: Accused of “provoking the police to use force” by waving a Ukrainian flag 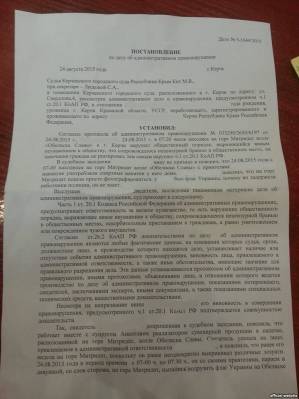