Make Russia’s Sentsov & Kolchenko Trial a Warning to the Perpetrators 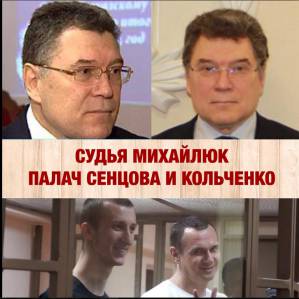 International outrage over the long sentences passed on Ukrainian film director Oleg Sentsov and civic activist Oleksandr Kolchenko was as foreseeable as the predetermined outcome of Russia’s Crimean show trial.  The courage and defiance shown by Sentsov, Kolchenko and Gennady Afanasyev was certainly not what Moscow had planned.  It is now for Ukraine and western countries to demonstrate commitment to rule of law by ensuring proper penalties against all those who take part in Russia’s farcical prosecutions and trials of Ukrainian nationals (and thus far one Estonian).

It was clear back at the end of May 2014 that Russia was seeking a Crimean show trial aimed at sending a chilling warning to other opponents of Russia’s annexation to keep their head low.  The Stalinist echoes were present from the outset in the emphasis on the demonized Ukrainian far-right nationalist party Right Sector and in the public demonstration of the ‘confession’ of two of the men – Oleksy Chirniy and Gennady Afanasyev.  Both Sentsov and Kolchenko insisted throughout on their innocence and Sentsov consistently repeated his account of the torture and threats he had been subjected to.

That was the Kremlin’s first miscalculation, and there have been many since.  Moscow has effectively abducted Ukrainian nationals and its attempts to foist Russian citizenship on the men are overtly illegal.  The defence could only be forced to remain silent about the file material for so long.  Once the indictments were made public, and from the first day of the trial, it was clear for everybody to see that there was no ‘terrorist plot’, and no evidence at all against Sentsov.  As the Memorial Human Rights Centre pointed out in its statement declaring both men political prisoners, the one charge against Kolchenko was in no way ‘terrorism’.  Memorial pointed to analogous cases in Russia where the charges had been different and the sentence at least three times smaller.

The prosecutor Igor Tkachenko ignored all of this, as did the three judges: presiding judge Sergei Mikhailyuk, Viacheslav Korsakov and Edward Korobenko.

There was no response from any of them to Afanasyev’s retraction of his testimony and statement in court that he had given it under duress.  There was none when the first real lawyer that Afanasyev has had, Alexander Popkov, read out Afanasyev’s account of the torture he had been subjected to and the threats he had received both before and after his courageous act in court.

The prosecutor and judges are demonstrably complicit in the crime committed against Afanasyev, Kolchenko and Sentsov.

It took a long time for countries to agree to sanctions against people implicated in the death in detention of Russian lawyer Sergei Magnitsky.  This case, that of Nadiya Savchenko and some other Ukrainians, as well as the trial of Estonian police officer Eston Kohver, are more straightforward.  No country should be allowed to abduct foreign nationals and convict them in farcical court trials on fabricated charges.

In the Crimean case there is also compelling evidence of the use of torture, and two of the men are now already serving sentences.  Afanasyev in particular is in danger, and measures are needed at international level to safeguard both him and his mother from likely reprisals.

A list is currently being drawn up of all those most implicated.  It will almost certainly include four FSB officers identified by the Centre for Journalist Investigations as directly involved in the arrest and torture of, at least, Oleg Sentsov.  All four are former officers of the Ukrainian Security Service [SBU] and are, or until recently were, Ukrainian nationals.  The four men are Alexander Kulabukhov;  Sergei Markov; Dmitry Vasilkov and Alexander Zinchenko.   It will also include the investigators, prosecutors, judges and others implicated in the men’s prolonged detention; the refusal to investigate credible allegations of torture; and multiple other violations of the men’s rights.

A similar list is needed for former pilot and Ukrainian MP Nadiya Savchenko, with this certainly including people holding high position in Russia’s Investigative Committee.  Ideally such a list could also include those responsible for the ongoing detention without properly legal services of 73-year-old Yury Soloshenko; the detention and torture of Serhiy Litvinov, and at least five other Ukrainians now in Russian detention.

A clear message is needed now.  The ‘trial’ of Nadiya Savchenko has not begun, but there are all grounds for expecting a similar travesty.  The sentences passed on  Sentsov and Kolchenko will certainly be appealed.

The appeal court judges, as well as all those taking part in Savchenko’s trial and other demonstrations by Moscow of legal banditry should know now that their actions will have real consequences for them.   Criminal orders to destroy human lives should not be obeyed, and those who arrest, torture, abduct and convict those the Kremlin wants punished should, as a minimum, face automatic bans on entry to EU and other democratic countries, and any other measures already applied to those on the Magnitsky List.