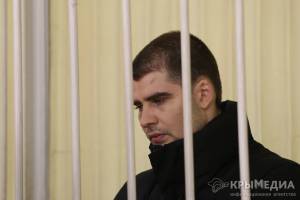 A court in Russian-occupied Crimea has upheld the legally absurd conviction against Euromaidan activist Oleksandr Kostenko, but reduced his sentence from 4 years 2 months to 3 years and 11 months.

Kostenko’s lawyer Dmitry Sotnikov believes that the reduction is to create an appearance of adversarial court proceedings since those calling the shots in Russia understand that the case will go before the European Court of Human Rights and Russia as occupier of Crimea will lose on every count.

The authorities have refused to investigate Kostenko’s allegations of torture which are backed by a broken arm and numerous other evidence of the treatment he received following his arrest.  As reported, all protocols have been falsified, with the investigators claiming that Kostenko was detained a full day after his actual arrest.  During that period there are very strong grounds for believing that he was tortured.

Kostenko was convicted of two charges.  He was accused of having slightly injured a Crimean Berkut officer on Feb 18, 2014 during the EuroMaidan protests in Kyiv.  This was deemed to fall under Article 115 § 2.b  of the Russian Criminal Code (deliberately causing mild damage to health for motives of political, ideological, racial, ethnic or religious hatred or enmity, or for the same motives in relation to a social group).

In legal terms this is total nonsense.  Not only did the alleged offence take place in Kyiv between two Ukrainian nationals, but it was also before Russia’s annexation of Crimea and clearly not within the jurisdiction of a court under Russian occupation.

He was also charged with unlawfully possessing a rifle barrel.  This, Sotnikov says, is because the prosecution had failed to prove that the alleged victim was a Russian citizen on Feb 18 and they would otherwise have been unable to imprison Kostenko.  The said item was almost certainly planted, with none of the safeguards against evidence being planted having been applied.

Most worryingly, Kostenko’s father Fyodor, who would be able to give valuable testimony about the search which supposedly found the weapon part has been missing since March this year.  He was returning to Crimea from Kyiv because of other searches being carried out, and there is no raitional reason why he would be voluntarily staying away.