German neo-Nazi demonstrators with a Kremlin-backed militant cause 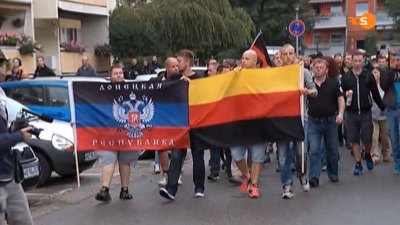 During Friday’s march in Heidenau against a new shelter for migrants, some of the German neo-Nazis carried the flag of the so-called ‘Donetsk people’s republic’.  Journalist Boris Reitschuster, who circulated a screenshot of the skinheads with their banner, points out how absurd this is.  According to Russian propaganda, this supposed ‘people’s republic’ is a bastion against the ‘fascist junta’ in Kyiv.  But then that same ‘junta’ is supposed to be rabidly anti-Semitic – except in the eyes of the militant leaders who have called them “pathetic Jews” and appear to mean it.

The scenes in Heidenau where neo-Nazis have been protesting for many days now have been particularly ugly, however it is nothing new to see European neo-Nazi and far-right organizations most vocal in their support for the Kremlin-funded and armed militants in Donbas, as well as for Russia’s annexation of Crimea.

German journalist Manuel Ochsenreiter is the editor of Zuerst, a neo-Nazi newspaper and a frequent guest on the Kremlin-funded English-language channel Russia Today.  He is reported to have claimed that the Russian soldiers who seized control in late Feb, 2014 were needed to protect democracy from pro-Nazi Ukrainian nationalists.  The members of the far-right Hungarian Jobbik party whom Russia has invited to visit Crimea have also provided only words of effusive support.

Ochsenreiter recently joined other members of neo-Nazi, fascist and some extreme left-wing organizations in endorsing a new project launched in Moscow against so-called political prisoners in Ukraine.

The appeal was signed  by Frank Creyelman, member of the Belgian extreme right Vlaams Belang;  far-right Spanish (Catalonian) politician Enrique Ravello and other members of far-right or neo-Stalinist parties invited by Russia to ‘observe’ the pseudo referendum in Crimea and illegal ‘elections’ in the so-called ‘people’s republics’.

Among the three Polish signatories were veteran ‘observer’ of invariably impeccable elections Mateusz Piskorski and highly controversial European Parliament deputy Janusz Korwin Mikke.  Both visited Syria in December 2014, expressing support for the regime of Bashir Al-Assad and finding no rights violations or political prisoners to be defended.  Nor have they ever found fault with the current regime in Russia.

In this they are in full accord with the Kremlin-backed militants’ most vociferous fans in Poland – activists from the extreme right Falanga party.  They totally support Russia’s position on Ukraine and the so-called ‘Donetsk and Luhansk people’s republics’.  Falanga’s leader Bartosz Bekier went to Donbas last summer and had photo shots taken with the militant leaders. There was suggestion then that Poles were actually fighting on the side of the militants.

Falanga supporters are also currently engaged in another anti-Ukrainian exercise which will doubtless receive coverage on Russian pro-Kremlin channels.  They are carrying out exercises on the Polish-Ukrainian border aimed at preparing units to fight Ukrainian ‘banderovsty’ [from the name of the Ukrainian nationalist Stepan Bandera, and, like ’fascist’, a term much abused in Russian propaganda].  One of their slogans calls on Poles to find and kill Bandera supporters.  The Ukrainian threat from the east, in the view of these far-right Poles, is solely from the far-right Ukrainian Right Sector who need to be eliminated.

Reitschuster notes that Russia has long used the term ‘fascist’ to describe those who oppose its dictatorship.  It has long cultivated friendships with those fascists and neo-Nazis offering Kremlin proxies in Donbas and Russia’s occupation of Crimea unwavering support.   And all, of course, in the name of fighting fascism.