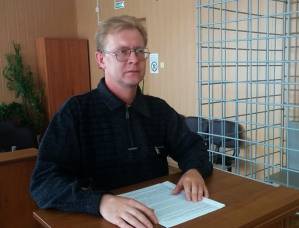 Russia’s ‘anti-extremism squad’ has again descended on Alexander Byvshev, the poet and former school teacher who was convicted in July of ‘inciting enmity’ over a poem in which he expressed his opposition to Russia’s annexation of Crimea.

Byvshev told Novaya Gazeta that three individuals had appeared at his home just before 7 a.m. on Friday, Aug 28.  He recognized one as Yevgeny Polyakov from the regional ‘Centre for Countering Extremism’ .  The other two said that they were electricity workers.

Polyakov produced a search warrant and claimed that the search was in connection with an alleged arson attempt on the prosecutor’s offices on Aug 6.  That pretext hardly explains why they removed Byvshev’s memory cards and a new computer which journalists and others had chipped in to buy the poet after the court ruling confiscated his old laptop.

Byvshev was then taken to the police station where they took fingerprints and a DNA mouth swab.  This was followed by an interrogation at the Investigative Committee where they informed him that he was a ‘witness’ in a case over the arson attempt.

“They asked whether I know the people who tried to set fire to the building and asked where I was during the night from 5-6 August. Their last question was “Are you continuing to engage in extremist activities?” I replied that I had never taken part in extremist activities and that during the night from 5-6 Aug. I had, as always, been with my parents. They are very ill and I can’t leave them without care.”

The local police station refused to make any comment on ‘the case’ to Novaya Gazeta, asserting that a criminal investigation was underway.

The arson attempt is supposed to have occurred on Aug 6, but was only reported on Aug 16, a full 10 days later.  A local newspaper reported then that somebody had thrown a Molotov cocktail at a window of the building but that this had hit the wall instead and didn’t even break.

Despite many years of working as a school teacher and demonstrating no hooligan proclivities, Byvshev’s poem in support of Ukraine clearly made him the ‘obvious suspect’.

As reported, on July 13 Byvshev was sentenced to 6 months community service.  The court ordered that his laptop be confiscated and prohibited him from working as a school teacher for two years. The alleged ‘incitement to enmity’ is in the poem ‘To Ukrainian Patriots’ in which he suggests that Ukrainians should ensure that not one inch of Crimea is handed “to Putin’s chekists”.

A month earlier Byvshev had been added to Russia’s ‘List of Terrorists and Extremists’, with this resulting in all accounts being frozen.  His flat had also come under attack twice.

Byvshev posted his poem ‘To Ukrainian patriots’ on his social network pages on March 1, 2014,   2 days after Russian soldiers without insignia seized control in Crimea.   In May he was charged with “stirring up hatred or enmity, as well as denigrating human dignity” (Article 282 § 1 of the Criminal Code).  The Sova Centre in Moscow which monitors both extremism and hate speech reported that it was Byvshev who had become the target of a hate campaign.  It pointed out that an article published in a local newspaper had been totally in the style of Stalin’s campaign against so-called ‘cosmopolitanism’.

The ‘linguistic assessment’ commissioned by the Centre for Countering Extremism concluded that “the hostile nature of the statements related to Russians in the poem is expressed in expressions regarding Russian state bodies and President Putin (“not one inch of Crimea to Putin’s chekists”).”   Ludmila Vlasova, the author of this scientific opus, asserted that the poem contained direct and covert calls to Ukrainian patriots to carry out physical and other actions in relation to the enemy – Russians:  to meet the enemies like their ancestors did; to prepare and hold weapons in readiness, etc.  This, she claimed, meant that the poem “To Ukrainian Patriots” contains statements which denigrate Russians.

Byvshev has now exhausted all domestic avenues and must now await a ruling from the European Court of Human Rights.  This will almost certainly find that his rights have been flagrantly violated.

The trial, severe penalties and now this latest search and interrogation are overt reprisals for freedom of expression which includes expressing opposition to Russia’s territorial aggression.  They are very clearly directed also as a warning to other writers, journalists, etc. to keep their head low and any independent thoughts “in the drawer” as in Soviet times.