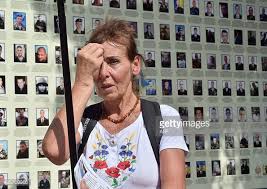 The Presidents of France, Germany and Russia marked the first anniversary of the Ilovaisk Massacre in which Russian President Vladimir Putin played a fatal role by backing “a new ceasefire”.  Perhaps it would have been undiplomatic to mention Putin’s murderous treachery, but wise to keep it in mind.  There was virtually no mention in the world media of the active involvement of Russian forces in the conflict, although it was precisely those events which rendered further pretence impossible.

After widespread expectation in July that the Ukrainian military would soon totally defeat the Kremlin-backed militants in Donbas, the situation changed dramatically in August.   Attempts by the Ukrainian military to regain control of the city of Ilovaisk from fighters linked to the so-called ‘Donetsk people’s republic’ began on Aug 7, 2014 and went badly wrong, with government forces becoming encircled by the militants.  The latter were from the outset reported to be heavily backed by Russian forces.  By Aug 28, the situation was dire and in the early hours of Aug 29, 2014, an ‘Appeal to the insurgents of Novorossiya’ appeared on Putin’s official website.

The agreement was a trick and the vehicles immediately came under attack with the use of mortar fire and heavy ammunition.  A minimum of 100 soldiers were killed, and many others taken captive as a result of that treachery.  Some remain in captivity.  As many as a thousand Ukrainian soldiers died during the Ilovaisk fighting.

No washing his hands of this

It had been clear since April that a large number of the militants were  Russian.  These included leaders  – like acting or former Russian military intelligence officer Igor Girkin (nom de guerre: Strelkov) and Muscovite Alexander Borodai, as well as mercenaries and some Russian volunteers, many from far-right, even neo-Nazi parties.  There were also local pro-Russian fighters, under leaders like Pavel Gubarev and Andrei Purgin with ties to the Russian fascist ideologue Alexander Dugin or neo-Nazi Russian Unity Party.

Their position, often even their rhetoric, varied in accordance with the stand taken by Moscow.  Even the leaders in Donbas  changed, with Russia circumspectly replacing Russians like Girkin and Alexander Borodai with local Ukrainian militant leaders (Alexander Zakharchenko, Igor Plotnitsky) in August 2014, in time for the September Minsk negotiations.

Nobody seriously believes that these new ‘leaders’ take any decisions that have not been approved – or dictated – by the Kremlin.  That surely included going against his express ‘request’ for a humanitarian corridor.

The other reason that Putin’s hands are bloodstained was widely recognized at the time and it is frustrating that western news reports should once again be talking of “pro-Russian militants” and stating only that “Ukraine asserts” that Russian soldiers and military equipment have been directly involved in the fighting since August.

The soldiers who used heavy artillery and mortar fire against wounded and retreating Ukrainian soldiers were almost certainly Russian, as were many of the troops involved in the fighting from mid-August, if not earlier.

Among those taken prisoner near Ilovaisk was Yehor Vorobyov, a TV Espreso journalist who on Aug 28 had interviewed two Russian paratroopers caught by the Ukrainian army.  The soldiers explained that they had been told they were going on exercises.  They were taken in column at night first to somewhere near the Ukraine – Russian border and then into Ukraine.  Asked by Vorobyov when they realized that they weren’t on a training exercise,   Ruslan Akhmetov and Arseny Ilmigov answered: “When we came under fire”.  Vorobyov was released finally on Oct 7.  A YouTube clip shows how Kremlin-backed militants interrogated and beat him up, striking him hard when he answered truthfully that he and others with him had been captured by Russians in uniform.

The first report in Russia of Russian soldiers being killed in Ukraine came on Aug 25, and many swiftly followed.  By Aug 27, 2014, the independent newspaper Vedomosti was asking: “If Russia is not at war, then who is in those freshly dug graves?”  Lev Schlosberg, the Pskov journalist and politician who revealed the first deaths of probably most of a Pskov paratrooper regiment was savagely attacked just days after he made the information public.  Even if we leave the question of why Boris Nemtsov was murdered open, a number of human rights activists and others who probed Russian military deaths have faced criminal prosecution or attacks.

Polish television crews had, by then, long been showing Russian armed personnel carriers, artillery and anti-aircraft weapons turning onto a road leading to the border.  See for example, Artyleria, wozy opancerzone i broń przeciwlotnicza. Ruchy Rosjan przed kamerą TVN24  (4 clips from Aug 18).  Although there were no direct shots of the Russian vehicles crossing, the steady flow was in one direction and there were also shots taken by the militants where you could see, for example, a BTR-80a transporter which the Ukrainian military do not have.  On Aug 19, the same journalist reported that the road leading to the border had been blocked since morning by an endless stream of Russian tanks carrying equipment, etc.

Western leaders found relief in waxing indignant over Russia’s first so-called ‘humanitarian convoy’ which began its long and ostentatious journey to Donbas on Aug 22.  As decoys go, it was enormous, but highly effective at distracting attention from the reports coming in all the time of Russian military crossing into Ukraine,

In his address on Aug 29, Putin also mentioned “humanitarian aid” which he said Russia was willing to provide “the population of Donbas suffering from a humanitarian catastrophe”.  There have been around 37 such ’convoys’ since, with the loads almost certainly containing arms, fuel, etc. for the war.

The lies and failure to keep to agreements have been repeated many times since then, most notoriously when Debaltseve was seized by Russian and pro-Russian forces soon after a ceasefire was supposed to have come into force.  Ukraine is now under heavy pressure to make new moves, including significant changes to its Constitution, while Russia and its proxies in Donbas continue to breach the Minsk Accords on a daily basis.