Uses and abuses of far-right electoral gains in UkraineDangerous AllianceDividing TacticA High price for disillusionmentFor those who couldn’t returnThe Limited Force of Fine WordsTerrible DeceitTrial by HeadlineOthersWithout labelsRussia Fines Radio Svoboda (RFE/RL) Over Alleged ’Foreign-Agent’ ViolationsUkrainian neo-Nazi C14, known for racist and homophobic attacks, gets public funding for ‘patriotic education’Enjoy the World Cup in Russia where you can get 20 years for opposing annexation of CrimeaSBU raids Communist Party on suspicion of treason & planning a coupRussia adds a vital source of information about rights abuse in occupied Crimea to its list of ‘foreign agents’Pussy Riot Members Detained for demanding that Russia #FreeSentsovFight Kremlin Lies with Facts about Imprisoned Ukrainian Filmmaker Oleg SentsovGuns of August: Fears of Full-Scale War Return as Casualties Mount in UkraineCrimean journalist placed on Russian ’List of Terrorists & Extremists’ for an articleКримінальний кодекс України треба декому-нізувати – правозахисники
• Topics / Politics and human rights

“A Grenade thrown at Ukraine” 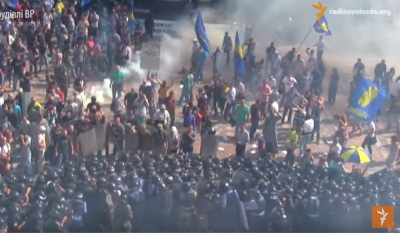 Updated information:  Three young conscripts have died from the grenade attack outside parliament on Monday:  24-year-old Ihor Derbin; 20-year-old Oleksandr Kostyn and Dmytro Slatnikov who was 21.  Well over 130 people were injured, most of them conscripts.

The protests were over highly divisive amendments to the Constitution, but it is not, as at least one headline claimed, the Constitution that is bloodstained, but those far-right politicians and their supporters willing to use violence, including a grenade and firearms, at a crowded demonstration.

There is video footage of the grenade thrower who has been identified as a member of the far-right VO Svoboda party, fighting in the party’s Sich volunteer battalion.  Between 20 and 30 other people were also arrested and are in custody.  As of Monday evening, around 100 Svoboda supporters were picketing the Holosiyvsky District Police Station demanding the release of 20 Svoboda activists.  That demonstration was at least peaceful, however the rhetoric on Svoboda leader Oleh Tyahnybok’s Facebook page remained extremely aggressive.  There is no suggestion of any blame for the tragedy, quite the contrary.  He claims that the fact that the Interior Minister Arsen Avakov so swiftly “appointed those to be guilty” indicated that “the provocation was planned by him.”  Having asserted that Avakov is following the road taken by Russian President Vladimir Putin, he then goes on to use vocabulary which has become standard for Russian propaganda.  He claims, for example, that the government is planning “to create the grounds for the use by the punitive organs of weapons, so that at the final vote of treacherous amendments to the Constitution, nobody will be able to stop them ».

Tyahnybok chooses to forget one or two crucial points.  Whatever we may think of the constitutional amendments, they were voted in at the first reading by a significant majority (albeit with a shift in the division of parties for and against) in a democratically elected parliament.  Trying to beat up parliamentarians is not part of the democratic process, nor is flinging grenades and shooting at the police and young conscripts.

The Svoboda Party did not get enough votes to enter parliament as a party last October, nor was there any significant level of support for the ultra-nationalist Right Sector.

The dead man was Ihor Derbin, a National Guard serviceman, serving only since the Spring of this year.

Oleksandra Matviychuk, one of the founders of Euromaidan SOS emphatically rejects any attempt to compare the violence on Monday to the gunning down of Maidan activists on Feb 18-20, 2014,   “Enough hiding behind the memory of Nebesna Sotnya” (those killed on Maidan), she says. “People using grenades and weapons in a crowd have as much to do with the slain Maidan activists on Instytutska St as the KGB Russian Patriarch Kyril has to do with the Christian Faith. “

They also betrayed those who were demonstrating peacefully, while the death of 24-year old Ihor Derbin will surely have a deterrent effect. Now everybody will think twice about whether to go out on protests against decisions by the government.

Prominent journalist Ayder Muzhdabaev (who recently moved to Ukraine from Russia) was blunt in his assessment of the day’s events.  He stresses that all those guilty of what he clearly considers to be terrorism must face prosecution.  All those public figures who welcome such methods should face “a total public and political boycott and media boycott, until their repentance and apologies to the relatives of the slain young man. No, in fact, afterwards as well. “

“This is scum, moreover dishonest scum, financed by God knows whom and no better than the terrorists of the DPR and LPR [the so-called ‘Donetsk and Luhansk people’s republics’.  Even worse because they strike at the very heart of Ukraine. “

Nothing has ever been proven, but questions about VO Svoboda’s sources of support have been raised for many years.  The party was clearly viewed as useful by the regime of Viktor Yanukovych, with it getting coverage on State-controlled television when other opposition parties were muffled and vilified.

There will doubtless be suggestions from beyond the Svoboda party itself that Russia was behind the events on Monday.  Leaving aside the reasons behind the proposed constitutional amendments, Moscow certainly stands to gain from any violence and division in Ukraine, especially that carried out by the far-right parties it has long demonized, especially since Euromaidan.

Attempts to blame it all on Russia, however, require too much to be glossed over and seem dangerously off-track.  There has been plenty of evidence of a more destructive side to the far-right movements in Ukraine, most recently in the events in Mukacheve.  The relative unity of purpose seen on Maidan, as well as the voluntary involvement of many members of far-right organizations in fighting Russia’s undeclared war in Donbas made many loath to overly condemn such organizations.

There was no enemy to be fought outside Verkhovna Rada on Monday – there were Ukrainians, including Ihor Derbin, Oleksandr Kostyn and Dmytro Slatnikov whose lives were cut short.

Miroslav Gai put it very well.   It is easy to see who won from Monday’s events, he writes: Putin definitely; the former Party of the Regions; and Poroshenko who has shown the people whom he’s forced to deal with.  Everybody’s seen what would happen if Tyahnybok, or the leader of the Radical Party Oleh Lyashko came to power.

And who lost?  The slain National Guard man and those wounded, their parents, children, girlfriends, friends, etc.

“The Ukrainian people, after all, that grenade was thrown specifically at them.”