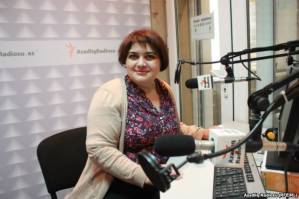 An Azerbaijani court has sentenced investigative journalist Khadija Ismayilova to 7 1/2 years in prison after convicting her on charges that rights groups have called retribution for her reports on corruption involving senior government officials.

The Baku court on September 1 found Ismayilova, a contributor to RFE/RL, guilty of tax evasion, illegal business activity, and abuse of power.

In addition to the prison sentence, Ismayilova, 39, was also barred from holding public office for three years and was fined $300 to cover legal expenses. The court found her not guilty on a charge of inciting an individual to attempt suicide, after the complainant withdrew his accusation.

The verdict drew swift condemnation from colleagues, human rights groups, and media freedom organizations, while Western governments and officials said they were “deeply troubled” by the outcome of the case.

Ismayilova, who has reported extensively on the financial dealings of long-ruling President Ilham Aliyev and members of his family, has strongly denied the charges and called the trial a "scam" meant to silence her work.

Nenad Pejic, RFE/RL’s editor in chief, said Ismayilova’s trial was "an example of politics, not law."

"There was no merit, ever, to any of the charges against her and there was no due process during her trial. The authorities simply decided to silence her at any price, " Pejic said in a statement on September 1.

Ismayilova’s mother, Elmira Ismayilova,  told reporters in Baku that the ruling will not stop or silence the award-winning investigative journalist.

"Khadija won’t stop, " she said outside the courthouse after the verdict. "Her mouth won’t close. Her pen won’t dry up. She will continue to talk and continue to write. She is a fighter. And she is very strong. And she is telling everyone to stay strong and continue the fight."

She said that her daughter’s reaction when the verdict and sentence was announced was to laugh, "just like she always does."

In Washington, U.S. State Department spokesman Mark Toner said the United States is “deeply troubled” by the sentence handed to Ismayilova, calling her case “another example in a broad pattern of increasing restrictions on human rights in Azerbaijan, including curtailing the freedom of the press.”

“We urge the government of Azerbaijan to release Ms. Ismayilova and others incarcerated in connection with exercising their fundamental freedoms, ” Toner said in a statement.

U.S. Representative Eliot Engel, the top Democrat on the House Foreign Affairs Committee, told RFE/RL that he is “troubled” by Ismayilova’s conviction “on these highly suspect charges” and that “Azerbaijan’s leaders will not move their country forward by stifling dissent and cracking down on the basic rights of their citizens."

The office of Council of Europe Secretary-General Thorbjorn Jagland, meanwhile, expressed concerns “about the systemic deficiencies in the Azerbaijani judicial system and the worrying trend of increasing cases against human rights defenders and journalists, which has a chilling effect on freedom of expression in the country.”

Britain’s minister for Europe, David Lidington, said he is “deeply troubled” by Ismayilova’s sentencing and urged Baku “to review her case in a transparent and fair manner.”

The verdict and sentence were strongly condemned by the OSCE’s media freedom representative, Dunja Mijatovic, and by the Council of Europe’s commissioner for human rights, Nils Muiznieks.

Mijatovic on September 1 called the charges and the trial "unjust, " saying that "they constitute yet another clear signal that the authorities are continuing to silence critical voices in Azerbaijan."

Muiznieks said the sentence "strikes yet another blow to respect for human rights and adherence to democracy and the rule of law in Azerbaijan."

"Ismayilova pays for her courageous work as an investigative journalist in a country where critical voices are muzzled one after the other, " he said.

Kenneth Roth, the executive director of Human Rights Watch, called the verdict "outrageous, " saying that it "shows the Azerbaijani authorities’ willingness to subvert the law to exact revenge against critics."

The Committee to Protect Journalists (CPJ) also condemned the verdict and sentence, saying that it “has determined the charges to be retaliation for Ismayilova’s reporting on corruption in the Azerbaijani government.”

Nina Ognianova, the coordinator for the media rights group’s Europe and Central Asia Program, said, "Ismayilova’s trial has been a farce, yet the consequences for her, and for all Azerbaijani journalists, are gravely serious."

In her final remarks to the court on August 31, Ismayilova called Azerbaijan’s government a "repression machine."

Before she was cut off by the judge, Ismayilova told the court that her reporting proved Aliyev had "squandered [the] state budget and his family members were direct beneficiaries."

She denounced what she called "the presidential family’s stolen money stored in offshore accounts, their abuse of state deals and contracts with offshore companies and groups, and of evading taxes."

She said, "Yes, I might be in prison, but the work will continue."

State prosecutors had requested a nine-year prison sentence for Ismayilova. She has been jailed since her arrest in December.

Her case has been cited by critics of Aliyev as an example of how his government muzzles dissent and jails its opponents.

Rights advocates, Western officials, and media watchdogs have repeatedly called for the release of all imprisoned journalists and free-speech advocates in Azerbaijan, including Ismayilova.

Several journalists and rights activists in Azerbaijan also were sentenced to prison terms in 2014 on charges that include tax evasion, illegal business activity, and hooliganism.

Their cases are widely seen as part of a government-led crackdown on dissent in the oil-producing former Soviet republic in the South Caucasus, which Aliyev has ruled since he succeeded his father as president in 2003.

Aliyev has repeatedly dismissed such criticism.

In a bid to stop protesters from grouping together ahead of the verdict and sentencing, Baku police on September 1 ordered the closure of a privately owned tea house near the court building where Ismayilova’s supporters have been gathering during the closed trial.

More than 100 of her supporters had gathered at the tea house on August 31 in anticipation of a verdict.