Court in Strasbourg accepts case against Russia over BeslanBeslan: Russia finally forced to answer before the European Court of Human RightsMothers of Beslan seek answers through StrasbourgRemember BeslanTruth about Beslan blockedBeslanBeslan: Eight years on, still no answersBeslan: No Answers, Only Prosecution of Slain Victims’ Mothers Who Dared to ProtestRussia found in violation of the right to life over Beslan School attack14 years of pain and of lies about the siege and storming of School No. 1 in BeslanBeslan: In Memory and MourningBeslan Six years on100 lessons on BeslanRemembering BeslanOn the Fifth anniversary of BeslanFamilies of BeslanBeslan: four years and no answersCriminal investigation initiated against members of “Voice of Beslan”“Voice of Beslan” will not be silenced«Voice of Beslan: Only the truth»
• Topics / News from the CIS countries 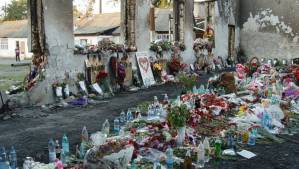 It was just after 1 p.m. on Sept 3, 2004 that Russian federal troops stormed School No. 1 in Beslan where over 1100 children, teachers, parents and grandparents of children had been held hostage since the morning of Sep 1.

The storming of the building began after explosions were heard, and a large number of the casualties were due to 3 explosions and the resulting fire.  186 children and 145 adults were killed, most during the storming.  The authorities’ claim that the explosions came from within the building has been disputed by explosives expert Yury Saveliev.  In a major report, he explained his reasons for believing that they were caused by grenades thrown from outside the building.  Since the explosions served as pretext for storming the building, with the use of tanks and heavy artillery, it is clearly critical to understand where they came from.

Questions about the explosions are among many that have been asked for 11 years, without receiving answers.  The Russian state did nothing to properly investigate the tragedy and instead harassed organizations like Voice of Beslan demanding to know the truth.

There has finally been movement this year, although typically, not from within Russia.  As reported here, on July 2, 2015 the European Court of Human Rights announced that it found most of the applications brought by victims or relatives admissible.  This almost certainly means that Russia will be found to have been in violation of the European Convention, though it may still be long in coming.

There are seven applications involving 447 applicants.  All cite (among others) violation of Article 2 (the right to life), asserting that:

Russia failed in its obligation to protect the victims.  The applicants believe that the Russian authorities had sufficient information, but did nothing to prevent the attack;

There has never been an effective investigation into the events.  The investigators have not managed to establish all cases involving indiscriminate force (flame-throwers, grenades, tanks) and those responsible have not been held to answer.  They have also not explained the unwarranted delay in measures to put out the ensuing fire in the sports hall.

As reported earlier, there remain questions which will probably not be addressed by the Court in Strasbourg, but are important, in particular regarding the poisoning of Anna Politkovskaya on an Aeroflot flight heading for North Ossetia.  The fearless journalist, slain three years later, would surely have exposed the lies being told from Moscow and would had a  good chance of achieving a peaceful solution.