Kremlin’s proxies purge memory of victims of Holodomor and political repressionRussia’s ’new approach’ to Stalin and extended secrecy about his victimsStalin Museum: Putin’s Russia Immortalizes Bloody DictatorAnger and Protest over Stalin Monument in YaltaPortrait of Stalin appears in Russian-occupied CrimeaStalingrad as latest step in re-glorification of tyrantNeo-Nazis in Moscow’s ServicePro-Russian separatists start their own anti-Semitic TV channelPro-Russian, anti-Roma, anti-Semitic and hunting out Ukrainian speakersThe Donetsk anti-Semitic leaflets – what should not be overlookedEast Ukraine crisis and the ’fascist’ matrixRussia continues its false narrative as defender of oppressed minorities in UkraineRussian propaganda claims Jewish organizations supporting Maidan are bringing on "second Holocaust"The Crimean referendum’s neo-Nazi observersPutin’s Neo-Nazi HelpersChief Rabbi and others dismiss Putin’s “anti-Semitic extremist” claimsRussian propaganda must be challengedWestern Media: Don’t distort the situation in Ukraine!Russia’s aggression poses dangers beyond Ukraine’s bordersCrimea: Anti-Semitic card and other provocation in time of siege
• Topics / Victims of political repression
• Topics / News from the CIS countries 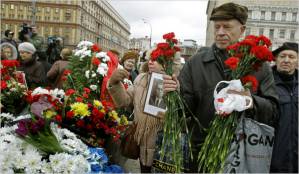 An article on Russian state-funded Sputnik International asserts that criticism of the Soviet past, including Joseph Stalin, is part of a US and NATO attack on “today’s Russia and its leadership that is unwilling to bow before the West.”  Although the words are those of the ‘expert’ interviewed, they gel ominously with a recent article from Russia’s Minister of Culture Vladimir Medinsky effectively defending Stalin’s role in the country’s history.  This new accusation of “blatant falsification of history used as a traditional Cold War tool” comes a year after a Russian decree closed access to almost all archival records on the KGB and its secret police predecessors for another 30 years.

The article Who Controls the Past Controls the Future: Why Does West Hate Stalin? was posted five days after the anniversary of the Molotov-Ribbentrop Pact of the Aug 23, 1939, the ‘secret protocols’ of which carved up Eastern Europe between Nazi Germany and the USSR. The EU has observed the date as European Day of Remembrance for Victims of Stalinism and Nazism since 2009.  Antagonism to any criticism of the Nazi – Soviet collaboration from 1939 to June 1941 is not unexpected.  At his meeting with German Chancellor Angela Merkel on May 10, 2015, Russian President Vladimir Putin justified the Pact, while avoiding any mention of the secret protocols. 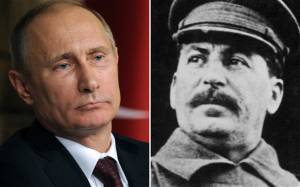 The Sputnik article is not published as an opinion piece, but as Sputnik’s interview of “US expert in Soviet history Professor Grover Carr Furr of Montclair State University”.

The description and constant repetition of the title ‘Professor’ is misleading.  Grover Carr Furr III is a Professor of English at Montclair State University, specializing in Medieval Literature.  He is however known, especially in Russia, for his specific views and writings on Soviet History, including ‘Khrushchev lied’ and recent denial that the Katyn Massacre (of 22 thousand Polish officers in 1940) was the work of the Soviet NKVD.   Wikipedia quotes him as claiming to have looked for Stalin’s crimes and not found a single one.

The state-funded Sputnik’s deceptive presentation of Furr is particularly important since the latter accuses historians Robert Conquest and Timothy Snyder of “vilifying Soviet history” and claims that the recently deceased Conquest’s “propagandist activity, masquerading as scholarship, was aimed against the USSR and coordinated by US/British intelligence”.

“Furr noted that Conquest periodically met with heavy criticism from prominent Western scholars, which blasted him for "consciously falsifying information" about the Soviet Union. In fact Conquest just used any source that was hostile to Stalin and the USSR, turning a blind eye to the fact whether it was reliable or not.”

A fine accusation coming from a specialist in English medieval literature fronting as Sputnik’s “expert in Soviet history”.

It is tempting, but time-wasting, to attack Furr / Sputnik on their grotesque distortion of history and scurrilous attack on renowned historians.  Those scholars and many others used sources widely available and reported similarly by the vast majority of colleagues in their field.

All these scholars enjoy access to state archival material.  It is only Russia under the current regime that is increasingly hiding its archives. On March 12, 2014, a decision was issued by the Inter-departmental Commission on State Secrets to keep the majority of Soviet secret police classified as secret for a further 30 years.  This includes the vast bulk of material regarding the Great Terror of 1937-1938, as well as multiple other crimes which Furr allegedly “couldn’t find”.

Kommanda 29, which has raised almost 13 thousand signatures calling for the decision to be revoked, notes that “access to the archives is virtually closed to members of the public. Almost half a century has passed since the collapse of the USSR, yet the FSB, the successor to the Soviet state security bodies are continuing to guard their secrets creating fertile ground for falsification of our country’s history.”

Soviet repression is at the same time being underplayed or denied.  An example is seen in the fate of the notorious labour camp Perm-36.  This had served since 1996 as a vital museum about the Gulag in general, and the specific camp in which Ukrainian poet Vasyl Stus died on September 4, 1985.  Now the NGO Perm-36 which ran the museum has been driven from the museum and forcibly registered as a ‘foreign agent’.  The museum has been taken over by the authorities, and, as a recent visitor wrote, the words ‘Stalin’, ‘dissident’ and Gulag are nowhere to be seen.

This is not the first Sputnik opus over recent months. On Aug 8, the same author Yekaterina Blinova wrote: “Holodomor Hoax: Joseph Stalin’s Crime that Never Took Place”  This claimed that the roots of the "Holodomor" ("deliberate starvation") myth lie in the longstanding Cold War standoff between Soviet Russia and the West”.

The manipulation of facts and use of highly specific ‘experts’ can seem too primitive to cause any harm.  They are for those who had no problem with the lack of any detail in the text above about Stalin’s crimes against humanity and the millions who died as a result.  Nikita Khrushchev back in 1956 did not lie, he just informed of only a part of those crimes.   Since a professor of medieval literature in the USA remains employed despite being on record for repeatedly denying all such crimes, it is probably safe to assume that not everybody does know.  In which case the lavish funds which the Kremlin is spending on such propaganda media in the West may seem like money well-spent.