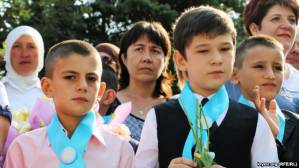 18 months after Russia invaded and annexed Crimea, not one class of the over 18 thousand children beginning school on Sept 1, will be with instruction in Ukrainian.  Even in traditionally Crimean Tatar schools, students now study in either Crimean Tatar or Russian, with Russian predominating. The occupation regime’s education minister Natalya Goncharova claims that this is all determined by parental demand.  Parents, and Crimean Tatar commentators speak of serious pressure on parents.  Other methods are also being applied, including the lack of textbooks for children to study in Crimean Tatar.

Radio Svoboda’s Crimean Service looked at the situation with Crimean Tatar School No. 42 which had a record number of children starting school this September.  Of the seven first-grade classes formed, four study in Russian.

The school is 10 years old, and until annexation had only Crimean Tatar instruction  with children attending from beyond Simferopol itself.  The Radio Svoboda correspondent spoke with one mother who is outraged that her child has been placed in a class with instruction in Russian language.  She says that it was specifically because this is a Crimean Tatar language school that she brought her child there.

Emine Avamilevu, Head of the Department for Education in the Crimean Tatar Language of the Mejlis, or Crimean Tatar representative assembly, compared the situation in Crimean schools before annexation and since.

3.1% of kids were studying with Crimean Tatar language instruction ; around 7% studied the language as a subject.

Under Russian occupation 96% of students are studying in Russian.  All ‘national’ (Crimean Tatar) schools now teach in both Russian and Crimean Tatar.  There are 15 such schools.   Even if a school is officially Crimean Tatar, the children may well be in a class taught in Russian.

There are around two thousand children studying with Ukrainian language instruction (1.2% of the overall number).

With 18 and a half thousand children beginning school this September, only 24 classes began with lessons in Crimean Tatar, and not one in Ukrainian.

The reduction in classes with non-Russian instruction is across the age range, while in the final two grades, according to Russian legislation, school students have to study in Russian..

Such pressure was reported already back in May 2014.  From a pedagogical point of view, the system imposed under Russian occupation is also likely to deter many parents from choosing another language but Russian.  If this is the mandatory language of the last two critical years at school, then children studying mainly in another language before then would be at a disadvantage.

There is another major factor which is surely deliberate.  Crimean Tatar schools have not been provided with the appropriate textbooks.  The parents of an eighth-grade student told Radio Svoboda that their daughter’s class had been issued with 7 books: 2 for the teachers, and 5 for 28 kids.  The standard of education must inevitably be lower due to the lack of textbooks.

Russian President Vladimir Putin and his people have constantly pushed the line that Russia’s occupation of Crimea was to ‘protect’ ethnic Russians and Russian-speakers.  The latter, it was claimed, without any evidence, were being discriminated against.

While not prohibiting study in Ukrainian or Crimean Tatar, the message presented is clear: if you care about your children’s education, study in Russian.