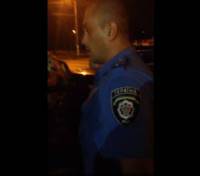 An investigation is now underway after two Kharkiv police officers were videoed hitting and then trying to detain a black student who appeared to be simply waiting with a friend, also black, at a bus stop.  Most disturbingly, the incident would have almost certainly ended differently had a passer-by not begun videoing the police behaviour and then felt compelled to intervene on the student’s behalf.

Neither the image nor the sound quality on the video here is good, however it certainly appears that the two young men were just waiting at the bus stop when two police officers approached them.  There was nothing about their behaviour to give any obvious grounds for the police to need to check their papers.

One of the police officers began hitting one of the students, and then both dragged the young man and pushed him into their police car, one kicking him before shutting the door.  The young student was indignant, but did not resist in any physical manner.

Kirill, the Kharkiv resident who had the presence of mind to begin taping, was standing at the same bus stop. He saw the officers take the young man’s student card and say that this was not a document.  The young man disagreed and began explaining that it had been issued by his institute who told him that it was a document. “The police officer hit him on the face and said “shut up”.

It was when the police had already shut the car door, telling the person they’d just detained for no apparent reason and threatening that their victim would soon “be pissing herself”, that Kirill stepped in.   He told ‘Night Watch’ that it was that last  phrase that made him fear for the young guys and intervene.  He went up and demanded to see their police ID.

One of the officers tried to claim that the guy had been drinking which both the student and Kirill refuted.  The student kept on asking what he had done, and stating quite clearly that “it’s because I’m black”.

Other witnesses gathered around, and the police officers began looking worried.  They tried to avoid showing their ID, though one eventually did, and also claimed that they had no forms for reporting the incident.

According to the report on Night Watch [Nochnoy dozor], the report was lodged the following day and a record taken off the young man’s injuries.

The police report that the prosecutor has initiated an investigation under Article 365 of the Criminal Code (exceeding powers). They promise that if the check establishes that the police committed an office, they will be prosecuted and “of course” dismissed.

They may ‘of course’ lose their jobs in this case because of the cheering response from Kirill and, later, other people.

Unfortunately, police officers in Kharkiv, a major city for foreign students, have long been accused, with cause, of ‘racial profiling’.

What would have happened once the police got the young man to the station in this case cannot be known.

There have, however, been many cases where students have had money extorted for their release and the waiving of entirely fictitious charges.  One of the problems with fighting such corruption and police impunity is that the victims may be afraid to make formal complaints – especially since they don’t believe they will have any impact.

It is about time that the police started proving that there is point in complaining and started cleaning up a much stained record without needing to be caught red-handed first.