Movement at last on Odesa 2 May investigationRussia Today, or why Odesa May 2 is different from BaltimoreOdesa May 2 Investigation: A Failed Test for Ukrainian JusticeMore Evidence against Incendiary Lies about Odesa 2 MayContinuing Obstruction of Odessa May 2 InvestigationPropaganda that KillsOdessa May 2 trial turns into farce as Russia continues ‘massacre’ propagandaBad Start to Crucial Odessa May 2 TrialsRussia’s New Odessa FileOdesa "Massacre" Propaganda vs. the FactsDangerous silence over police role in Odessa May 2 eventsWithout Double StandardsWhat Russian TV won’t show about the events in OdessaCVU: Pro-Russian activists sold information about pro-Ukrainian activists in OdessaUHHRU condemns police role in Odessa tragedyOdesa 2 May Suspect: We were financed by Moscow"US guilty of genocide": Kremlin supports anti-Maidan festival with links to the German far rightProsecutor suspected of involvement in Odesa May 2 tragedyUkrainian authorities slated over Odesa May 2 investigationUkrainian researcher savagely tortured for ‘confession to treason’ against Russian proxy ‘Donetsk republic’
• Topics / The right to life

Vital Probe of Odesa May 2 Tragedy stymied because of questions answered? 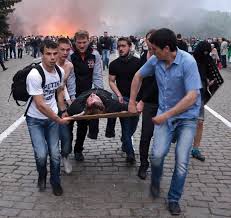 Despite the clear importance of a proper investigation into the deadly disturbances and fire in Odesa on May 2, 2014, and the mileage gained by Russia’s propaganda machine from any delay, the number of investigators has been drastically reduced, just when they seemed to be making headway.  The trial of one man facing serious charges is constantly obstructed and the ongoing detention of others accused of lesser offences has already been used by a Moscow-backed initiative to claim political prisoners in Ukraine.  The Council of Europe’s International Advisory Panel has been assessing the investigation.  Its report,   due at the end of October, 2015, seems likely to be critical

It was widely feared in Spring 2014 that a scenario similar to the orchestrated seizure of control by Kremlin-backed militants in the Donetsk and Luhansk oblasts could be expected in Odesa.  There had been express warnings from both the Security Service [SBU] and Interior Ministry of likely trouble, in particular with respect to a football match scheduled on May 2 between the Odesa Chernomorets team and Kharkiv’s Metalist, and the pro-Ukrainian unity march before it.

A crucial action plan codenamed Khvylya [Wave] had been prepared for the event of disturbances, yet was not registered and therefore did not come into effect.

Six people died of gunshot wounds and many others were injured during disturbances in the city centre after the pro-unity march was attacked by anti-Maidan (and pro-Russian) activists.  The first two people killed were Euromaidan activists and the news of those deaths was instrumental in turning the disturbances uncontrolled and violent.  More weapons began being brought to the scene and the other four deaths were of anti-Maidan activists.  A large number of people were injured, including police officers.  A further 42 people – all anti-Maidan activists -  died as a result of a fire in the Trade Union building on Kulikovo Pole.  That fire was certainly caused by a Molotov cocktail, however these were being hurled by activists on both sides and specialists agree that there is no way of knowing whether the fatal incendiary device was thrown from outside the building, or from inside.  There would have been far fewer casualties had the emergency services responded when the first reports of fire were received.  The 40 minute delay was fatal.

There are clearly major questions needing to be answered, most crucially:

Who was responsible for not registering and/or implementing the Action Plan?

Why were the emergency services so criminally slow in arriving at a fire they were informed about repeatedly from the beginning?

The guilt or innocence must also be established of specific individuals.

On Aug 18, Svitlana Pidpala from the May 2 Group reported that the investigative team was being reduced from 8 to 3 investigators.  Her frustration was palpable. After a year the investigators, she says, had processed around 10 criminal prosecutions, some of them already in court, and they were also investigating others. She names, for example, the case of Astakhov who is believed to have brought weapons and ammunition to the centre of Odesa that day.

Now, suddenly, the team has been reduced with the head of the team, Mykola Rudnytsky recalled to Kyiv.  “They reduced the team immediately after specific results appeared and criminal proceedings were initiated against the Emergencies Ministry and other cases. And after specific representatives of the Interior Ministry system began to be affected”, Pidpala writes.   She is convinced that the removal of Rudnytsky and others is an attempt to effectively stop the investigation and suggests that this may be because it could get too interesting.

On May 13, Petro Lutsyuk, ex-head of the Odesa regional police was placed under house arrest on charges of professional negligence (Article 367 of the Criminal Code).  Lutsyuk had given a verbal order for the Action Plan to be implemented and signed the document confirming this order.  He is accused of not having ensured that the Plan was registered and implemented.  Lutsyuk was freed from house arrest on Sept 1, with the court not convinced by the prosecutor’s argument that Lutsyuk could abscond or try to influence the investigation if free.

Lutsyuk’s deputy, Dmytro Fuchedzhy has been on the international wanted list since May 2014, and is believed to be in hiding in Transnistria.  In his case, there are grounds for suspecting him of helping the anti-Maidan activists.  He is believed to have enabled Vitaly Budko, known as ‘Botsman’, who is clearly visible in video footage shooting from a Kalashnikov rifle at pro-unity activists, to have escaped.

The May 2 Group have on a number of occasions stressed that they have found no evidence of a general police conspiracy and say that many officers were themselves injured trying to deal with the disturbances.

There is almost no movement on an important bill No. 2885,  tabled by Oleksy Honcharenko on May 20.  This proposes to waive liability for all those accused only of taking part in the disturbances.  In June, the relevant parliamentary committee found the bill to be in line with the Constitution, but no more has been heard of it since.  Honcharenko stresses that the bill is aimed at easing social tension.  It could also help identify those responsible for the violence. At the moment, activists are nervous to come forward, fearing that they will face charges of participating in the riot.

If the law is to be passed, then there is no excuse for delay given the number of people currently in detention who would be directly affected.  The May 2 Group have long expressed concern over the arbitrary nature of the charges against all but one of the 21 anti-Maidan activists on trial over the disturbances.  For a long time, all were accused of the same vague “participation in mass riots’.  The charge is now of causing mass disturbances in the course of which they attacked a peaceful march, using firearms, stones, Molotov cocktails, etc.

The charges are more serious, but the very fact that the wording is the same in each case raises doubts about how proven they are in any given case.  This is especially disturbing since until recently, 11 of the young men had been in custody for well over a year.  A court on Aug 27 released three of them pending trial, but that still leaves 8 men in detention.

There appears to be hard evidence against only one defendant – Serhiy Dolzhenkov – who is alleged to have organized and led the attack on the pro-Ukrainian unity march. Artem Davydchenko is in hiding but would otherwise be facing the same charges.

The May 2 Group believe that Budko (Botsman) was provably responsible for at least the first death of Ihor Ivanov.

There is also Serhiy Khodiyak, a Euromaidan activist, who is charged with shooting at people on Hretska Square and causing the death of at least one person (Yevhen Losynsky), Tetyana Herasimova from the May 2 Group, says that it is likely that Khodiyak’s lawyer will seek to get the charge of murder withdrawn since no weapon was ever found.  Khodiyak was initially placed only under house arrest, while others, facing lesser charges, were remanded in custody. House arrest can only be extended twice and there are now no restrictions on his movements.

His separate case has just been transferred to the same court as the cases of the anti-Maidan activists.  There has up till now been very little progress, largely because hearings into his case are regularly obstructed by members of the ultra-nationalist Right Sector who clearly don’t want him tried at all.

It has been argued that Khodiyak should be acquitted on the grounds that he was defending the country.  There probably is reason to believe that a takeover, similar to that in parts of Donbas, was being planned and that the tragic events of May 2 were the jolt that saved Odesa from this fate. It is harder to accept that the use of firearms by anybody during riots can be viewed as necessary defence.  In Kyiv on Aug 31, 2015, an activist angered by the ‘decentralization’ bill passed in its first reading in parliament threw a grenade causing the death of three National Guard conscripts.  He may well have believed he was defending his country in opposing the bill.  Many of the MPs who voted for the bill may equally have viewed their support as defence of the country, as a necessary measure, vital to ensuring an end to the conflict in Donbas.

Justification of one killing and not another is seriously dubious from a legal point of view and politically very dangerous.  It is the country’s leaders ultimately who will end up making decisions which are not their prerogative.  In neighbouring Russia, it is increasingly people who oppose the regime of Vladimir Putin who are accused of being against the state.  Rule of law demands a different approach.

Respect for the law and the value of human life are the paramount reason why Ukraine’s leaders must make good their commitment to properly investigate the events of May 2, 2014.  They should also, however, consider the damage their inaction is doing Ukraine.  Moscow and the Russian media have pushed claims of a ‘massacre’ from the outset, using cynical lies and deliberately edited video footage to distort the truth.  It is likely that they will continue to do so in any case, but they are  only helped by Ukraine’s failure to fully examine what went wrong that day and ensure that those responsible are held to answer.