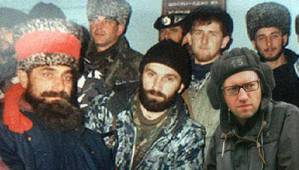 Russian Investigative Committee claims that Ukrainian Prime Minister Arseny Yatsenyuk once fought against Russia in Chechnya aroused hilarity and some excellent flights of Photoshop fantasy following publication of an interview with the head of the Committee, Alexander Bastrykin.  It was left to the Russian propaganda channel Life News to mention one chilling detail.  The allegations are based on ‘testimony’ obtained from two Ukrainians held incommunicado in Russian detention for over a year and now accused of involvement in the same fighting. There is also a third person whose testimony in turn is likely to be used to sentence Mykola Karpyuk and Stanislav Klykh to long prison sentences.  There is nothing funny about torture, and we have every reason to believe that the men were tortured since neither Karpyuk nor Klykh were even in Chechnya.

The interview is very long and quite staggeringly cynical in its distortion of the facts about Nadiya Savchenko and repetition of the Committee’s claim that Russia has ‘universal jurisdiction’ over crimes committed beyond its borders.  All of this was forgotten because of the bombshell in the last two paragraphs.  After claiming that “the majority of Ukrainian far-right nationalist radicals who took part in the anti-constitutional coup in Ukraine in February 2014, at one stage fought in Chechnya on the side of illegal gangs …”  Bastrykin then announces that Arseny Yatsenyuk was among them.

He goes on to cite “the investigators’ information” for his allegations that Yatsenyuk took part in at least two military confrontations on Dec 31, 1994 and Feb 1995.  And as if that were not enough, Ukraine’s future prime minister also tortured and shot captured Russian soldiers in Grozny on Jan 7, 1995.   Again citing this invaluable ‘information’, Bastrykin claims that Yatsenyuk and other active members of UNA-UNSO were awarded the highest honour by Chechen rebel leader Dzhokhar Dudayev in Dec 1994 for nothing less than the killing of Russian soldiers.

Yatsenyuk was elsewhere at the time, and could doubtless prove it if he saw the need.  So too could some of the other people, like Dmytro Yarosh, head of Right Sector and MP, who was also never in Chechnya.  Yatsenyuk may well have found the absurd accusations a pleasant distraction from the real fire he has been under lately.

The Prime Minister and all other figures mentioned are out of Russia’s reach unlike Mykola Karpyuk who was abducted and taken by force to Russia in March 2014. and Stanislav Klykh who was ‘arrested’ after arriving in Russia to visit a woman he’d met in Crimea.  Nothing at all was known about Karpyuk’s whereabouts until recently, and virtually nothing about Klykh.

Neither man has ever taken part in fighting in Chechnya, and only Karpyuk has any link with UNA-UNSO.  They are charged with murder and attempted murder of two or more people carrying out official duties, and could face 15 year sentences.

The Life News report on Sept 8 confirms fears that the case is to be Russia’s next show trial with ‘confessions’ used to fill in all those moments where reality might otherwise take precedence.  The channel claims that it was Karpyuk and Klykh who ‘testified’ against Yatsenyuk, “unanimously stating that he had taken an active part in the military action”.

Bastrykin never mentions any of the three people in Russian detention, while Life News omits one crucial, albeit virtually unknown, individual – Alexander Malofeyev. ICRF mentioned him in its report of Aug 25, including the key detail: his case has been separated out because he has agreed to ‘cooperate’ with the investigators, almost certainly providing whatever testimony is required against Karpyuk and Klykh.

According to Maria Tomak from the Centre for Civil Liberties, Karpyuk has still now not seen any lawyer chosen by his family and the consul has not been allowed to visit Klykh.  The latter, as reported here, was also held in maximum secrecy for a long time, with a stream of ‘lawyers’ appointed by the investigators and in no way concerned to represent the interests of the detained men.  10 months after his arrest, lawyer Marina Dubrovina took on Klykh’s case.  She spoke to Tomak about the case and preliminary hearing on Sept 15 in Grozny.

Klykh, she says, was subjected to a range of forms of torture for the first two months after he was taken into custody.  These included: being beaten; suspended; electric shocks; being deprived of food and drink; psychotropic substances. “He was beaten until he’d memorized the calibre of the Kalashnikov rifle with which they claimed he shot Russian soldiers”  Dubrovina points out that Klykh is an academic who’s never held a rifle in his hands and did not even do military service.  He has lost 15 kilograms and his health urgently needs attention.  All of this was disregarded in the medical examination he was given at the beginning of the summer which found him fit to stand trial.

Klykh totally denies all the charges and has recently lodged a complaint over the torture. Dubrovina describes the procedure they’ve gone through but acknowledges that it’s unlikely that any criminal proceedings will be initiated against Klykh’s torturers.

All of the evidence against Klykh is based on testimony from this mystery individual called Malofeyev whom Dubrovina has never set eyes on.  From the file material, it seems that he is a Ukrainian national and was in Chechnya, after which he moved first to Crimea where he committed an armed robbery or something similar and served a sentence.  In 2005 he moved to where his mother lives in Novosibirsk (Russia) and there committed more crimes. In 2009 he was sentenced to 23 years imprisonment.  It is unclear, she adds, whether he has been subjected to physical force, but it is certainly easy to exert influence on him by depriving him of medication since, as well as being HIV positive, he is also suffering Hepatitis B, C and tuberculosis, and is addicted to opium.

The same dependence on ‘testimony’ was seen in the trial of Oleg Sentsov and Oleksandr Kolchenko.  The fact that Oleksy Chirniy refused to testify in court and Gennady Afanasyev not only retracted his testimony, but described in detail the torture that he had been subjected to, was ignored by the court which sentenced Sentsov to 20 years, Kolchenko to 10, for nothing.

ICRF has given graphic accounts of the supposed murders and rape of multiple unidentified people which Serhiy Litvinov, a Ukrainian cowherd ‘confessed to’ under torture.  Litvinov has since explained that he was prepared to confess to anything to stop the torture.

Yury Yatsenko, who is thankfully back in Lviv after one judge at least issued a short sentence, has described the same measures applied to get him to ‘confess’.

All of this is terrifyingly reminiscent of Soviet political trials, in which any confessions – to spying for multiple countries simultaneously, ‘Ukrainian nationalism’, plots to overthrow the regime and more, would all be confessed to, and nothing else mattered.