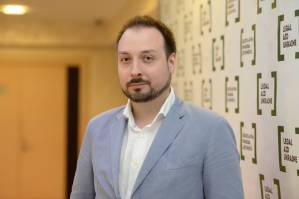 Andriy Vyshnevsky, Director of the Justice Ministry’s Legal Aid Coordination Centre has been stripped of his licence to practise as an attorney following critical comments about Ukraine’s National Bar Association.  There is particular irony in the fact that his criticism was given - and not well received - during a conference on judicial reform.

The news was posted on the Bar Association’s website on Sept 10 and says only that the Kyiv Regional Bar Qualification and Disciplinary Commission had held ‘hearings’ into the disciplinary proceedings against Vyshnevsky and that he had been stripped of his licence.  The term ‘hearings’ is curious given that the meeting was held in Vyshnyevsky’s absence.

As reported, the conference took place on June 16, and disciplinary proceedings over alleged false and defamatory remarks were initiated on July 3.

In Vyshnevsky’s address, he said that the main risk for the system of free legal aid was “the appalling state of Ukraine’s bar or system of attorneys [advokatura]”.   He spoke of a low level of ethics and professionalism within the bar, and asserted that attorneys are the main corrupt link at the present time.  He pointed out that the National Association of Attorneys is not fighting the phenomenon of ‘police attorneys’.  He was referring to the system whereby investigators often contact attorneys they know and who can be relied on to essentially serve the prosecution, not their supposed client.  Vyshnevsky criticized the Bar Association of not even acknowledging the problem. All of this, he said, was why reform to the system of attorneys was needed, and why at present the system as it exists could hamper the implementation of judicial reform.

The Bar Association reacted with an appeal to the Justice Minister, the heads of bodies of lawyers’ self-government as well as to all attorneys.  They asserted that statements like those made by Vyshnevsky were unacceptable and called on lawyers to “express their active position”.

The Ukrainian Helsinki Human Rights Union was blunt in its assessment, stating  that “Persecution of attorneys for expressing critical views places in question the ability of Ukraine’s Bar to fulfil its mission”.  It noted with regret that the trend towards a totalitarian model for the bar which clearly emerged in 2013 had become entrenched in the activities of Ukraine’s Bar Association.”

It is possibly relevant that the Bar Association is in parallel expressing emphatic opposition to the system of legal aid which Vyshnevsky is in charge of coordinating.

On Sept 10 at a meeting in the Council of Europe offices in Strasbourg, Valentyn Hvozdiy, Deputy Head of the Bar Association asserted that “the present model of free legal aid is one of the most serious threats to the implementation of judicial reform”.  He claimed that it “is totally controlled by the Justice Ministry and is a tool for the destruction of an independent Ukrainian bar.”

There is no mention of Hvozdiy having told colleagues in Strasbourg about the disciplinary measures against Vyshnevsky.

Arkady Bushchenko, UHHRU Executive Director and himself an attorney, dismissed Hvozdiy’s criticism.  He says that “the Bar Association simply saw that there is a quite successful system of free legal aid and thought that it would be good to get such a system, i.e. to get control of its finances and in general take control of it”.
The so-called ‘judicial reform’ initiated by Viktor Yanukovych soon after becoming President in 2010 was overtly aimed at removing any vestiges of independence in Ukraine’s justice system.  If judges were the first target, by 2013 aggressive measures, including disciplinary proceedings and withdrawal of the right to practise, were being applied to stamp down on any attorneys who took an independent stand.  (see: Ukraine’s Bar under Fire).

It is over 18 months since new leaders came to power promising real reforms, including of the judiciary.  The attack on Vyshnevsky and the deeply disturbing fact that he has been stripped of his licence indicate that the Bar Association, at least, does not appear to have noticed.