Rigged and Secretive Fight against Corruption?Government accused of rigging anti-corruption selection commissionHead of Traffic Police Dismissed after Scandalous Lifestyle ExposedIt’s Tax Time In Ukraine, And Financial Discrepancies Suggest Corruption EnduresBehind the declarations: how public officials lived – and live nowParliamentarians’ secrecy regarding income given judicial OKVerkhovna Rada and Constitutional Court least willing to divulge public informationCourt rejects Verkhovna Rada claim that staffing details are not for the publicOPORA takes secretive Verkhovna Rada Office to courtCHESNO: Office of the Verkhovna Rada flagrantly violating Public Information ActUkrainska Pravda takes parliament to court over concealed informationResidences of Azarov, Lytvyn and Yushchenko to cost the taxpayer 50 million UAHCourt has no problem with parliament not handing over MP’s declarationsVerkhovna Rada Office refuses to hand over Deputies’ declarationsPublic Information Law like a Bolt from the Blue for the AuthoritiesCVU: Ukrainian authorities not ready to be openFirst legal proceedings over alleged infringement of Public Information LawStop Censorship will force Deputies to make their income declarations publicThe Public are most interested in how public funding is spentLaw on Access to Public Information: comes into effect
• Topics / Elections
• Topics / Social and economic rights 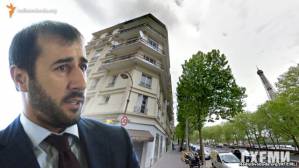 Investigative journalists report that an MP and sponsor of the populist Radical Party which came to power promising to radically combat corruption has concealed ownership of a flat in the centre of Paris worth well over a million EUR. If this is an embarrassment, so too should be the news of the Radical Party’s strange electoral bedfellows in the Kherson oblast.

A flat with a view – of the Eiffel Tower

Journalists from the Skhemy: Corruption in Detail programme have analysed the official declaration lodged by Radical Party MP Serhiy Rybalka and found it lacking in at least one flat valued at almost 1.4 million EUR.

Oleksandr Chornovalov and Vitaly Yeremitsa  had no difficulty tracking down the Parisian flat in the French records.  These show that in 2014 Serhiy Rybalka and his father , Viktor, founded a French company called Vesta Estate which purchased the property.  In breach of Ukraine’s anti-corruption legislation, there is no mention of this on Rybalka’s income declaration published on the Verkhovna Rada website.

Skhemy spoke with an estate agent in Paris who indicated that the flats in that part of the city are much sought after, but also among the most expensive in Paris.  While most, the agent said, are purchased by French families, there are also a lot of wealthy foreigners, from Russia in particular, though they do sometimes get people from Ukraine.

People, for example, like Serhiy Rybalka whom Skhemy calls one of the main sponsors of the Radical Party as well as MP since October 2014.    Rybalka told the journalists that he “doesn’t remember, but I don’t think I bought anything last year”.

It probably depends on your income whether you can forget buying something worth 1.4 million EUR.  Somebody had not forgotten it since the property changed official hands in July 2015.  In the middle of July, two offshore companies - Adosida Incorporation Limited та Isaola Incorporation Limited  - became the nominal founders of Vesta Estate which formally owns the property.  Rybalka’s aunt, Olha Kryvokhatko became the Director of Vesta Estate.

Up to this year, there was effectively no liability for ‘forgetting’ major amounts of property and income on declarations.  Lawyer Taras Koval explained that earlier the worst a person could face was administrative liability.  This has now changed, and failure to tell all the truth in this year’s declaration could lead to criminal charges and conceivably up to 2 years imprisonment.

It remains to be seen how this actually works and how sudden transfers of ownership to offshore companies will be treated.

There have already been serious allegations of government corruption over the makeup of a commission responsible for selecting people to run the National Anti-Corruption Agency, the body mandated to check income declarations, etc.

Vitaly Shabulin, Head of the Centre for Countering Corruption stresses that lies told by elected representatives are direct deceit of the voters who have a right to know about a candidate’s financial position.  Whether or not politicians face criminal liability, they should constantly be held accountable politically and before the electorate.

Dementy Bily from the Kherson Regional Committee of Voters of Ukraine [CVU] reports that the Radical Party has been actively including former representatives of Viktor Yanukovych’s Party of the Regions on their election commissions.  One of the three people named was on the CVU ‘lustration list’ in 2014 because of her active role in ensuring that despite the victory of one candidate, another was declared the winner.

Bily later noted that it is not only Oleh Lyashko’s Radical Party that is using the services of former Party of the Regions deputies, “but also other ‘revolutionary’ parties”.   “Yesterday the Bloc of Petro Poroshenko replaced the head of the regional election commission with Vitaly Abramov, one of those responsible for the supposed victory of the Party of the Regions candidate Volodymyr Saldo in 2010.

Dodgy legislation was introduced by the regime of Viktor Yanukovych to enable control of election commissions by Party of the Regions members or those serving that party.  A large number of the serious electoral shenanigans reported during all elections were specifically linked with the role of such commissions.

Like corrupt dealings and forgotten assets, it seems that politicians are not in a hurry to relinquish shady methods for ensuring electoral ‘victory’.