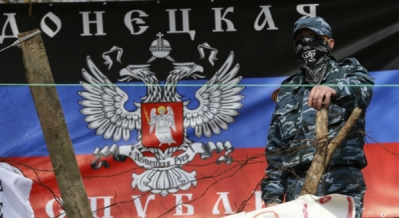 On Sept 11, the so-called ‘Donetsk people’s republic’ [‘DNR’]  reported a ‘significant increase’ in support for ‘DNR’ with this now reaching over a quarter of the population under Kremlin-backed militant control. It later tried to doctor the records to indicate support on a par with that which Russian surveys keep suggesting that Vladimir Putin enjoys

The official news agency of the so-called ‘Donetsk people’s republic’ [‘DNR’] has proudly reported a ‘significant increase’ in support for ‘DNR’.  The percentage of respondents supporting the so-called ‘republic’ and against “the Kyiv government that came to power after a coup on Maidan” has risen from less than a quarter of the population (22%) to 29%.

The survey was supposed to answer the question “Why do you support DNR?”  Instead, it inadvertently revealed the overwhelming lack of majority support for the ‘republics’ which Russia is demanding special status for.   Such statistics would have been scorned had they been offered by the Ukrainian authorities or NGOs.

These results are especially dismal given the fact that the traditionally pro-Ukrainian population in these areas are largely living in exile, outside Donbas. They also demonstrate that there are limits to what can be achieved by total seizure of the media.  As reported here, as soon as the militants seized control of an area, Ukrainian television and radio channels were taken off air and replaced by pro-Kremlin Russian media.  A very large number of Ukrainian Internet resources are totally blocked.

Since the survey discussed below was first reported in both Ukrainian and Russian media, as well as here, somebody clearly understood how damaging the information was and totally doctored the results.  That the original had not been a typo can be clearly seen by the significant change in the construction of the sentences.  In the so-called ‘updated’ version (with exactly the same time given), the relevant paragraph reads:

“The survey showed that the number of people who for this or that reason support ‘DNR’ remains unchanged at 89%.  The number of those who do not support ‘DNR’, as in July, was 4%.  7% were undecided, 2% more than in July”.

There is no sign of the previous survey results which makes it likely that they were found in July to have been 22% as originally reported, and quietly shelved.

A similar situation was seen in Crimea in early March when a survey on the pro-Russian Krymskaya Pravda newspaper found that were a referendum to now be held on the status of Crimea,  61% of the respondents would vote for greater autonomy within Ukraine, and only 19% would vote to join Russia.  The newspaper later claimed ‘provocation’ and removed the survey.

In fact, however, there had been earlier indication that the claims of near universal support for Russia’s annexation of Crimea had been rigged.  As reported, Russian President Vladimir Putin’s very own Human Rights Council found that the turnout for all of Crimea had been less than half -  between 30 and 50% and only 50-60% of those had voted to join Russia.

According to the latest report, 6, 500 people were surveyed in 19 cities under ‘DNR’ control, with this enabling the ‘Special Status’ Centre for Sociological Research to assess changes in public opinion over July and August 2015.

There has also been an increase in the number of respondents in three cities who consider themselves ‘patriots of Donbas’.  In Telmanove the percentage rose from 30 to 34%; in Zhdanivka from 37 to 48% and in Yasynovata from 28 to 41%.  Ukraine’s authoritative Democratic Initiatives Foundation has long noted that regional affiliation has always been particularly strong in Donbas, and it is unclear what the respondents understand by the term ‘patriot of Donbas’.

Such a low level of identification with Russia probably suits Moscow’s current position, possibly linked with Russian President Vladimir Putin’s imminent appearance at the UN, that the militants are willing for ‘integration’ with the rest of Ukraine.  It is nonetheless startling given the militants’ own acknowledgement that some 70% of their budget comes from Russia.

In May 2014, the militants in both ‘DNR’ and the Luhansk oblast equivalent (‘LNR’) held something they claimed was a referendum.  It was condemned by the Ukrainian government, Ukrainian election watchdogs and the West as farcical, but praised by Russia as fair and legitimate.  As well as the number of militants wielding Kalashnikov’s at ‘polling stations’, and numerous armed abductions of people known for their pro-Ukrainian position, it was also possible to “vote for others”, to vote without a passport, and regardless of where you lived.

Russia reported that 89.7% of the population had voted for the independence of the Donetsk region and that the turnout had been over 74%.  All of the Russian or militant-controlled media spoke of the Central Election Commission in headlines and only occasionally mentioned that the body in question was that of the ‘Donetsk people’s republic’  Since the so-called referendum was on whether there should be such an independent ‘republic’, it could hardly be administered and overseen by the latter’s election commission.

In early November last year, both so-called ‘republics’ held ‘elections’ which were effusively praised by the ‘observers’ from various European far-right or occasionally neo-Stalinist parties whom Russia brought in.  As well as the difficulty of assessing an event which bore so little resemblance to elections, there were only ‘DNR’ and ‘LNR’ candidates, and the question of support for the ‘republics’ did not arise.

Russia’s Foreign Minister Sergei Lavrov recently claimed that the ‘republics’ are willing to take part in Ukrainian elections with OSCE observers.  Since he asserted that various things must be directly ‘negotiated’ with the Ukrainian government which the latter will not do, this may have been a PR effort.  Certainly the recent demands made by the militants give no grounds for expecting free and fair elections.

The ‘DNR’’s own public opinion survey makes it clear why they can’t risk it.

The two versions of the same report (from http://frankensstein.livejournal.com/652656.html 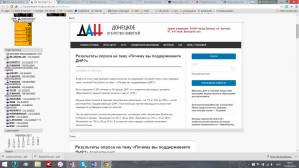 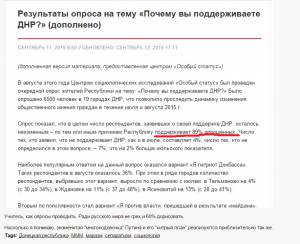 (earlier on the left)