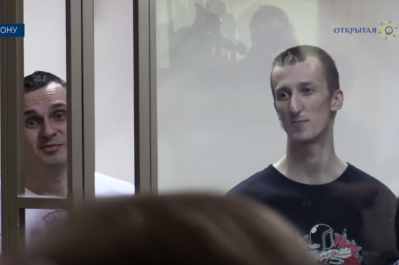 How do you react to 20- & 10-year politically motivated sentences? If you’re Oleg Sentsov and Oleksandr Kolchenko, by singing Ukraine’s national anthem!

Russia’s most prominent human rights defenders, as well as writers, political analysts and others have endorsed a stark warning that “The country has again taken the road of political repression”.  They specifically demand that the sentences against Ukrainian film director Oleg Sentsov and civic activist Oleksandr Kolchenko are revoked.

The signatories, who include former political prisoner Sergei Kovalev, and the writers Vladimir Voinovich and Ludmila Ulitskaya, call the politically motivated trial of Sentsov and Kolchenko the latest and harshest, but by no means the only case of modern political repression.

The address points out that two significant events for Russia came almost simultaneously.  First, on Aug 18, Prime Minister Dmitry Medvedev signed the Concept Framework for State Policy on Immortalizing the Memory of the Victims of Political Repression.  Then, on Aug 25, the Rostov District Military Court sentenced Sentsov to 20 years, Kolchenko to 10 years, both in a maximum security prison.

It is hard to believe, the authors write, that the events were separated by only one week.   The Concept Framework asserts that the Russian government’s aim is to ensure the formation of a law-based state.  One of its professed aims is “to condemn the ideology of political terror” so as to prevent a repeat of the tragic events from 1917 on.

“The fabricated trial of Sentsov and Kolchenko on charges of terrorism which ended in a monstrous sentence can only be compared to the political trials of the Soviet era. This trial was open and all the circumstances are known to the public. There was no crime, as in, no acts of terrorism. An arson attack on a door, the only specific action which the defendants were charged with  (without sufficient grounds and proof) would, according to Russian legislation, be at very most treated as hooliganism.  The rights of all the defendants were seriously violated, with this even including beating and torture during and following their arrest. The main witness for the prosecution stated in court that he had been tortured and retracted his testimony given under torture.

What is this, if not ideologically motivated state terror?  The aim is to intimidate and suppress any peaceful resistance in Crimea from those who regard themselves as citizens of Ukraine and oppose Russia’s annexation of Crimea.”

The authors point out that in the 1920s and 1930s some trials were also public, with the judges then also just as brazenly ignoring facts and following the prosecution position however idiotic it was.

Those trials are now officially condemned by the Russian state, which is coming up with the same trials now.  Or almost the same since now the defendants are not always ready to confirm any fantasies that the investigators suggest.

They point to the Bolotnaya Square and Pussy Riot trials.  There are already dozens of political prisoners in Russia, and at this rate the number will soon be in the thousands.

The sentences against Sentsov and Kolchenko must be revoked, and an assessment carried out of all these criminal cases by the State human rights institutions – the Human Rights Ombudsperson and the Human Rights Council under the Russian President (an advisory body only).

Human rights groups have already prepared material on current cases of political repression and are happy to provide these.

The signatories are divided into members of the Human Rights Council and members of the Congress of Intelligentsia.  The human rights defenders are: Ludmila Alexeyeva; Valery Borshchev; Alexander Cherkasov; Svetlana Gannushkina; Sergei Kovalev; Oleg Orlov and Lev Ponomarev.

Four opponents of Russia’s invasion and annexation of Crimea were arrested in May 2014. Sentsov, Kolchenko, Gennady Afanasyev and Oleksy Chirniy were all were held incommunicado, without access to lawyers in Simferopol, for up to 2 weeks before being taken by force to Moscow where on May 30 the FSB [Russian Security Service] claimed that they were members of a ‘Right Sector’ terrorist organization planning a series of terrorist attacks in Crimea.

Both Sentsov and Kolchenko maintained their innocence from the outset and, particularly Sentsov, repeated allegations of torture.

Afanasyev and Chirniy ‘confessed’ and agreed to ‘cooperate’ with the investigators, and both received minimum 7-year sentences in separate trials.

There was enormously secrecy about the case with Sentsov and Kolchenko’s lawyers forced to sign agreements not to divulge any information.

It became clear from the first day of the trial on July 20 that the only ‘evidence’ in the case was the testimony provided by Chirniy and Afanasyev.

Chirniy appeared at the trial on July 30.  He refused to give evidence in court meaning that the defence could not question him, but did not retract his earlier testimony which was simply read out to the court.

On July 31 Afanasyev was brought to the courtroom.  He stated that he was refusing to testify and that he retracted all previous testimony which had been given under duress  (see the moving exchange between Afanasyev and Sentsov).

It was only after this that Afanasyev first received a lawyer not provided by the investigators.  Alexander Popkov visited him in his cell and then passed on to the court Afanasyev’s account of the torture he had been subjected to at the outset, the pressure he had been under before appearing in court and the threats since against both him and his mother.

Afanasyev is now almost certainly in danger and is also in need of support.  Sentsov and Kolchenko first, and then Afanasyev also, have been recognized as political prisoners by the authoritative Memorial Human Rights Centre.

Please WRITE to all three men – addresses, as well as some guidelines here: