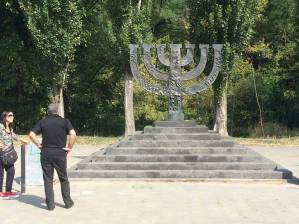 Anti-Semitic vandals have desecrated the Menorah at Babi Yar [Ukrainian: Babyn Yar ], the site where at the end of September 1941 the Nazis murdered over 33 thousand Jews.  This latest of six vandal attacks on the Menorah was carried out between 2 and 3 a.m. on Sunday night, the eve of Rosh Hashanah, the Jewish New Year.

The assailants put tyres around the Menorah, poured an inflammatory liquid over them and set them alight.  Thankfully the flames were noticed and put out by the guard watching over the Ukrainian Orthodox Church nearby.

The Euro-Asian Jewish Congress points out that the same method was used to desecrate the Memorial to the Victims of the Holocaust in Melitopol (Zaporizhya oblast) during the early hours of Aug 27.  That, in turn, was the second of two acts of vandalism during the summer, much more serious than the first.

On Sept 6, as well as twice in January and in June a swastika was daubed on one of the memorial stones next to the Menorah.

At the beginning of July, the vandals sprayed the Memorial with some kind of foul-smelling liquid.

The Monitoring Group on the Rights of National Minorities reported an increase in racially motivated vandalism in 2014, and it seems unlikely that the statistics will improve this year.

Nobody has admitted responsibility for any of these clearly anti-Semitic acts, and the two with tyres seem particularly serious.   While it would be premature to point fingers, Tetyana Bezruk from the Monitoring Group does note that far-right groups have recently become less concerned about hiding anti-Semitic views.

On Sept 29 and 30, 1941, the Nazis murdered over 33 thousand Ukrainian Jews at Babyn Yar, then a ravine on the outskirts of Kyiv.  This was the worst such massacre committed by the Nazis, yet it was effectively concealed by the Soviet regime.  The official monument erected in 1968 was to the memory of “Soviet citizens during the period of the temporary German-Fascist occupation of 1941-1943”.  A formal apology was issued in 1991, a month after Ukraine declared independence, and the Menorah erected.