Why must Ukrainians fight for their right to vote? 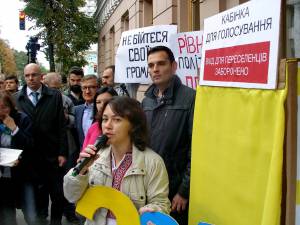 Ukraine’s Social Policy Ministry announced on Sept 14 that the number of displaced people in Ukraine has almost reached 1.5 million.  On that same day many people forced from their homes stood outside parliament demanding the reinstatement of their right to vote.  With the local elections due in October, speed is critical in passing one of three bills now tabled in parliament to rectify the current situation which prevents internally displaced persons [IDP] from voting. The picket was attended by members of the Committee of Voters of Ukraine; Vostok SOS, Krym SOS and other civic organizations.

One of those present, with her infant son Nikita, was Oleksandra Dvoretska who is herself in exile from Simferopol (Crimea).  In a column piece for Ukrainska Pravda, she explains that they have spoken with many MPs, diplomats, members of international NGOs regarding the need to ensure that IDP can vote.  None has disputed the need to change the legislation, though many believe it impossible to achieve in the time remaining.  Since the protest over effective disenfranchisement began at least two months ago, the excuse seems a little strained.  Dvoretska also rejects it saying that the bill can be voted on this week – given the will.

Realistically, she adds, only around 10% of possible voters will actually take part in the elections with this requiring some action from them in advance and effort. She stresses that “each displaced person included on the voter list outside the Luhansk and Donetsk oblast means the removal of him or her from lists where the Ukrainian government is less in control of the process.

If we genuinely wish to prevent rigging, then we shouldn’t give the opportunity to tick ballot papers where international observers will not be working.  And the residents of those areas are now displaced persons in other cities”.

Depriving displaced people of their vote means refusing to enable them to integrate into the community where they live.  It is an indicator, Dvoretska says, that they have not been accepted into that community, that they are not seen as needed, and that they should returned to territory under occupation.

The law on local elections was adopted in July this year, and aroused anger among IDP because it deprives the huge number of displaced people in Ukraine of the right to cast their vote.   Calls for President Petro Poroshenko to veto the bill were, however, ignored.

The problem is that the law states that the territorial community according to which a person votes is determined by their registered place of residence.  Proof of this registration is provided by their internal passport or a temporary document confirming their Ukrainian citizenship.

This means that IDP who are living in another place and who have a document confirming their status as displaced persons, but no stamp in their passport about the corresponding registration will simply not be able to vote in the local elections.

Article 70 of Ukraine’s Constitution clearly stipulates that only people under the age of 18, non-Ukrainian citizens or people who are mentally unfit are denied the right to vote.  The new law on the local elections effectively adds one other category – internally displaced persons.