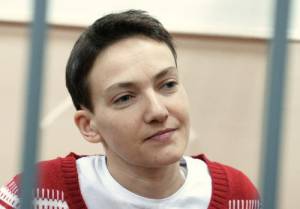 Among the applications from Nadiya Savchenko’s defence rejected on Tuesday was for one Kremlin-backed militant leader to be called for questioning over the total discrepancy between his testimony and that of another leader and the prosecution.

The preliminary hearing in Russia’s ‘trial’ of Nadiya Savchenko took place under enormous security on Sept 15 in the Russian city of Donetsk in the Rostov oblast.  The first hearing into the actual charges against Savchenko will take place on Sept 22 before a panel of three judges.  Savchenko’s lawyer Mark Feygin reports that the defence applied for a panel (after earlier applications for a trial by jury were unsuccessful), though it is not quite clear what the alternative was supposed to have been.  All other applications on Tuesday were rejected.

Russia has refused to move the trial of the former military pilot and now Ukrainian MP and Parliamentary Assembly of the Council of Europe [PACE] to Moscow despite the lack of any legitimate grounds for holding it in Russian Donetsk.  This small city lacks proper court facilities and is 150 kilometres away from the SIZO or remand prison in Novocherkassk.  This means that Savchenko will spend a minimum of three hours per day being taken to and from the court.

An earlier preliminary hearing at the end of July had been deferred after the court agreed to put the question of where the trial should be held.  It seems likely that there had been an order from above to drag out proceedings, since less than a month later, on Aug 21, another court ruled that the fact that witnesses in the case live in Moscow, Moscow oblast and in Voronezh (and nobody in Russian Donetsk) was not sufficient reason for moving the trial.

The trial itself, despite earlier attempts by the investigators to make it behind closed doors, will be open, but clearly the facilities and distance from Moscow will make it that much harder for diplomats, PACE representatives and the media to attend the hearings now scheduled for Sept. 22, 29, 30 and Oct 1.   As reported, Nadiya Savchenko herself has expressed concern for her own safety and that of her mother and sister.  She calls Russian Donetsk “the loading point and base supplying the pro-Russian militants fighting in the east of Ukraine and heading there from Russia”.

It seems that one of the applications rejected was to have former leader of the so-called ‘Luhansk people’s republic’ summoned for questioning.   There is certainly good cause since in the final version of the indictment, the prosecution claims that Savchenko, who had been captured by Kremlin-backed militants on June 17, was released and voluntarily crossed into Russia.  This is based on the testimony of the current leader of ‘LNR’ Igor Plotnitsky.  Bolotov, however, clearly states that she ‘escaped’.

The recent interview given by Alexander Bastrykin, Head of Russia’s Investigative Committee gained publicity because of his astounding assertion that Ukraine’s Prime Minister Arseny Yatsenyuk had murdered and tortured Russian federal forces in Chechnya during the 1990s.   Less attention was given to his chilling and extremely cynical distortion of Russia’s ‘case’ against Nadiya Savchenko who is facing murder charges over the death through mortar fire of two Russian journalists who provably died after Savchenko was taken prisoner.

None of the evidence proving Savchenko’s alibi, nor other arguments against the charges have had any impact on successive courts which have consistently extended her detention.  It was extended again on Sept 15, this time by a full 6 months.  The defence openly predict a maximum sentence of up to 25 years and hope only that an exchange of prisoners will be organized.

Please see the text below as explanation of why the proceedings now underway are so very difficult to call a trial.